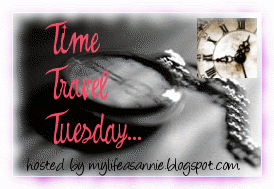 My Life as Annie hosts Time Travel Tuesday in which we look back at some time in our lives in relation to the topic of the week. Last week I suggested our first cooking experiences might be a fun topic, and Annie graciously decided to use that idea for this week’s theme. Thanks, Annie!

I don’t remember exactly what my first cooking experiences were — I think I received a Girl Scouts cooking badge. But the first thing I remember cooking was fried chicken when I was maybe 11 or 12 or so. I must have had some experience with it before this — I can’t imagine starting out with this on my own! But for some reason I was cooking fried chicken with a friend — and we were so afraid of the hot oil that we’d drop the chicken in and then run to the back door. That sounds like a disaster in the making, doesn’t it? But somehow we avoided setting the house on fire or burning ourselves. I also remember making oatmeal cookies with a friend — it called for brown sugar and we didn’t have any, so we just used regular white sugar (I didn’t know then about the emergency substitution section in most cookbooks). The cookies all ran together — it looked something like those pizza-pan sized cookies you can get at the Chocolate Chip Cookie Factory, only they didn’t have those then, so we couldn’t claim we were imitating them. 🙂 They tasted good — they just didn’t hold a cookie shape.

I also remember now being younger than this and roasting a hot dog over the flame of a gas stove with a fork.

By the time I got married, I had been cooking for my family of 8 for a while — I would usually at least get dinner started before my mom came home from work — so having to take on meal preparation wasn’t that big a leap for me. I do remember when we were dating and both in the dorms, we didn’t have access to ovens, so a popular thing to make for one’s boyfriend was one of those boxed cheesecake mixes. Often at dinnertime you’d see a girl going to meet her guy with a cheesecake she’d made, and I do remember making those for Jim on occasion. I don’t remember what the first meal was that I cooked for Jim, but I remember a couple of early cooking disasters. Gravy was something that took me years to learn. I do fine with it now — though we pretty much only have home-made gravy when we have turkey. But my first attempts were awful. I remember one time getting my electric hand-held mixer out and “beating” the gravy right in the pan to try to smooth it out. Another time, the texture was ok, but it was really, really light. I thought I had read somewhere that red plus green made brown, so I put a few drops of red and green food coloring in. It turned very green, and nothing I tried made it look a normal color. For some reason, instead of dissolving in tears I started laughing hysterically, then Jim came in to see what was going on. I couldn’t make myself eat it — the color was just too awful. But we joked about green gravy for years, and for years I also kept a jar of ready-made gravy in the cabinet “just in case” mine didn’t turn out.

Another time I was making popcorn the old fashioned way in a saucepan with some oil in it (this was before the days of microwave popcorn. They had then these big popcorn poppers usually with a yellow plastic domed lid — but we didn’t have one). I had a little can of popcorn that I thought was enough for one batch. I was talking with Jim while I made it, and he saw me dump the whole little can in and knew it was too much, but just sat back to watch what happened. Blissfully unaware, I kept talking and shaking the pan back and forth — when suddenly popcorn erupted over the sides of the pan and spilled everywhere. I don’t remember exactly how I reacted — I’ll have to ask him — I think I just said “Oh! Oh!” He did help me clean it up, after he stopped laughing at me. 😀

Updated: I am adding this in after my initial post because I just remembered it. 🙂 Once in our early married years, when I was trying to be the frugal Mrs. Housewife, I discovered rutabaga was only 19 cents a pound. I had never made or even seen it before. But I got some and came home and looked in my cookbooks to see how to make it. There was a recipe to include it in mashed potatoes and another recipe with apples. So I made the mashed potatoes — and the rutabagas turned them kind of an orange color, but they tasted ok. The apple dish was “ok” but not spectacular. When my husband came home, he noticed the mashed potatoes were off-color, but he was trying to be polite and not say anything, while I was anxiously awaiting his comments. Finally I asked him how he liked the potatoes. He cautiously said, “What’s different about them?” I told him about the rutabagas — and he was thoroughly grossed out. That’s one of the few things that he just thoroughly cannot stand. When I mentioned that the apple dish I had made for dessert had rutabagas, too, he said, “Oh, no, not the apples, too!” So — no more rutabagas for this household, no matter how cheap they are. 🙂

You can read more “time travels” back to early cooking experiences at Annie’s today. Feel free to share yours, too, and add the link in there!