Last week was spring break for Jesse. Jim took the week off to start on one of our biggest and most needed projects: painting the house. This is the “before” view: 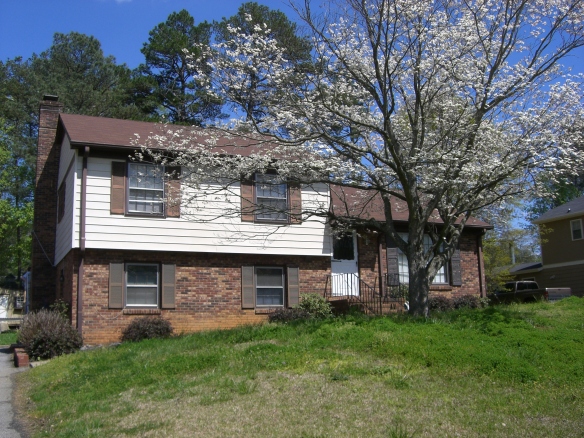 With a split level, there are odd little places with pieces of roof sticking out from the rest of the house and little patches of paneling. I was inside the “sun room” at the back of the house when Jim and Jeremy were on a little section of roof to paint the wall above that and below the main roof. I took this picture from inside the sun room looking out at them.

Yes, Jim is climbing a ladder on a roof. Yes, I did pray for safety a lot during the week!

Jeremy and Jesse working in the front:

This is the contrast of the new color on the left and the old one on the right:

I was a little alarmed at first because the new color looks more yellowish (though not so much in this picture) when I was trying to avoid a yellow tone. When I told Jim’s mom we were painting it off-white, she said, “Ecru?” Unfortunately there are scores of tints and shades in that color family! But when I look at a wall of the new paint by itself it doesn’t look yellowish, so I think it’s fine. Better be! It’s too late to change it! I was just frustrated with myself in my color choice, but it will be fine in the long run.

Jim working on the front:

Jeremy did most of the shutters and gutters:

While I was walking around taking pictures, I thought the view of the sky through the dogwood tree was pretty:

This is the view this morning — the lighting is a little different because the previous pictures were taken on a sunny day and it is overcast this morning. The old is on the left, the new on the right: 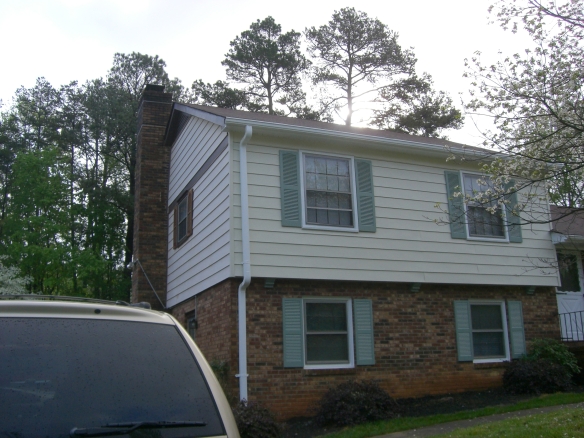 I like it. It looks a lot lighter and brighter.

When I was looking at colors, I didn’t even think about the area around the windows, but changing that from dark to light makes a lot of difference.

Jim was frustrated that he lost two days of painting due to rain at the beginning of the week. He used the time when it wasn’t actually raining to do some prep work, cleaning and scraping. He had mercy on Jesse and didn’t make him work as much as he could have so he could just relax some over spring break. Jesse did get to have a friend over one night. Jason doesn’t get a spring break from his school and had a heavy week of homework, so he wasn’t able to help much. I felt bad that I didn’t contribute more. I am no good on a ladder: one of the residual effects of TM is balance problems. I did have some extra time on Saturday and offered to help Jeremy with the shutters or gutters, but where he was set up on the patio there wasn’t much room, and he was enjoying listening to his iPod while working and didn’t really need or want help at that point. I did provide lunch and dinner. 🙂 I don’t usually make lunches for all of us: years ago when the kids discovered the joys of sleeping in, they woke up at different times and ate at different times, and if I made them each something to eat whenever they got ready, I would have been in the kitchen all day. So they usually make their own lunches. But this week they usually took a lunch break all together, and I figured having a meal ready was the least I could do. And, of course, I’m the chronicler and photographer. 🙂

The greatest majority of it is done. The wall on the left and a little patch of siding on the right is all of the “big” stuff, and Jim will have to rent a ladder to reach the peak (at least I think and hope he is planning to. He did mention the possibility of putting a ladder on top of the van. :O  ) They also need to do the doors. But there is some tedious little stuff left, like the wood parts on the window panes. We’ll just have to fit that in as we can.

Today everyone is back to school and work. I sure enjoyed not setting the alarm clock last week. Funny how 6:30 is “sleeping in” these days!

This Saturday is the ladies’ luncheon at church. We got the favors mostly done at the ladies’ meeting last week, and I have a pretty long to-do list before Saturday, but, though it is going to be a busier than usual week, it doesn’t feel really pressured and overwhelming. Even so, there is a little underlying feeling of nervousness that seems to be a part of planning any event, even though things are going well and there’s nothing to worry about and it is all in God’s hands anyway. I just try to ignore it and carry on. 🙂 But I’d appreciate your prayers that everything go well and especially for the lady doing the presentation of Darlene Diebler Rose’s Evidence Not Seen as she prepares. I’m praying that neither of us is adversely affected by the pollen that is so prevalent this time of year!

I was playing around with StumbleUpon last night after noticing in my blog stats that someone viewed one of my posts via Stumble. I clicked on the link, but it didn’t show me what page was viewed: it just took me to a page saying someone had viewed one of my posts, which I already knew. I had already signed in with them but just hadn’t done a lot with it. I looked around and read several things. I didn’t know if I could “stumble” any of my own posts, and I tried it just to see if I could. I was astounded this morning to see that the posts I had stumbled had all received over 90 views just since last night via StumbleUpon, and one, When there is no hunger for God’s Word, received over 2,000 views! I guess it works!

I think that about catches us up with the goings-on here. This will be a busy week preparing for the ladies’ luncheon; next week I’ll have the ladies ministry newsletter/booklet to do; Jason graduates in May, and his fiancee and future mother-in-law are coming for that, so there are some house projects I’d like to get done before that. Jesse has a sports banquet coming up as well as a piano recital and choir concert in May. Then when his school gets out later in the month, I’ll have a breather for a while — until Jason’s wedding in August!!

12 thoughts on “Catching up”