The big project Saturday was to make a serious dent in cleaning out our shed before getting ready to move. Some stuff (which somehow was mostly mine….) was in boxes that had not been touched since we moved here years ago. 😳 I knew I wouldn’t keep most of it, but I didn’t want to just throw the boxes away without looking through them first, because I knew there were some treasures in there.

So while Jim, Jeremy, and Jesse took care of some of the bigger items, I sorted through boxes of old magazine articles and recipes (that I had planned someday to file :roll:), letters, notes, etc. I just flipped through and threw away most of anything that appeared to be torn out of a magazine or newspaper — I figured if I had done without those clippings this long, I probably didn’t need them. But this struck me funny in light of all of our house-hunting: 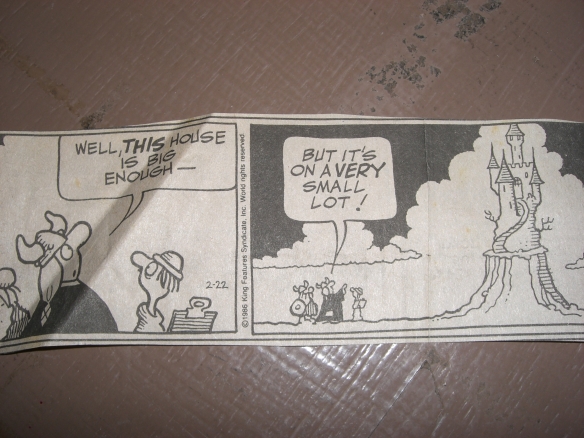 I did find some old bulletins with some poems and quotes I want to keep. Some of them that I tossed included stories and poems that still circulate the Internet today! I found some “Pastorgraphs,” various thoughts on the backs of church bulletins from a beloved former pastor for whom our son Jesse is named, some of which I might post in the future.

I found an old notebook from college days with dividers for sections for devotions, sermon notes, prayer requests, Christmas shopping lists, etc. The very first page had this list: 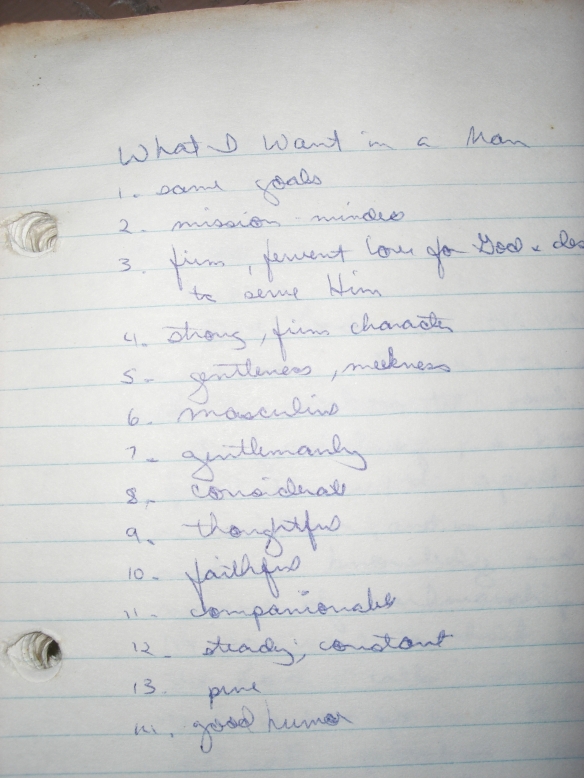 I found several pages of notes from devotions that I will have to read through later: 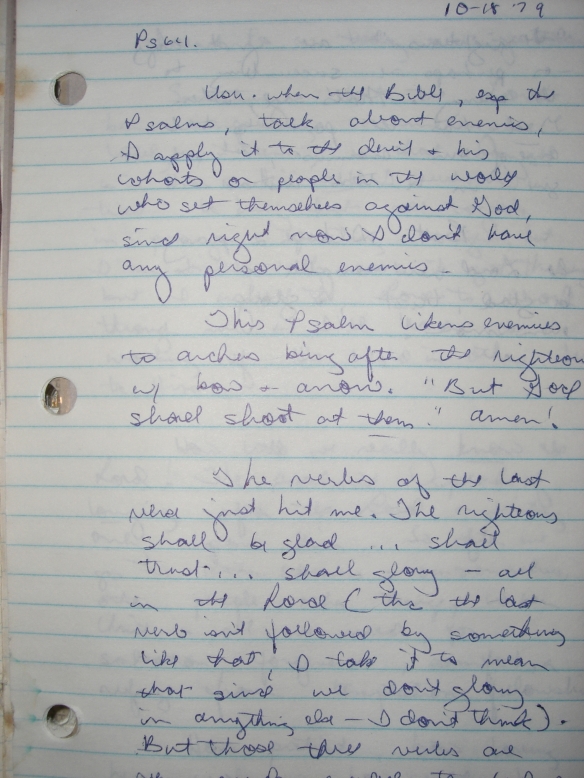 I don’t take notes like that any more, I think because I kept piling up all these notes without ever really consulting them again. But I probably should. What little bit I read was an interesting picture of what I was learning and thinking at the time. I probably would think through the passages better if I were still taking notes like that.

I also found a few letters and personal notes. One from Jim from dating days brought a smile. It said:

THIS IS A LEGAL DOCUMENT

Do not destroy until the agreement specified has been fulfilled.

To the bearer, Barbara F—, I,  James H—, promise to honor this note concerning an agreement made in the month of February 1979. Because of her gracious acceptance of a date on a Sunday of the previously mentioned month, I promise and rightfully owe Miss F— one day of her choosing in which I shall do whatever she wishes (within reason). This IOU is binding and shall not be dissolved.

I showed it to him and asked him if I had ever cashed in on that. He said, “Many times.” 😀

He found a stray slide on the floor, and saw that it was a picture of me from a couple of months after we started dating. He cleaned it up and printed it out: 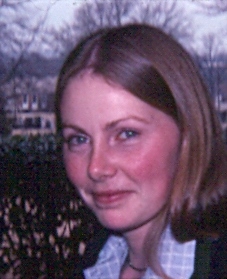 We still haven’t figured out why it was in slide form.

I also found a pillow from a quilting class I took. I didn’t like the backing I had used, so I cut it off and want to see about remaking it with other fabric. 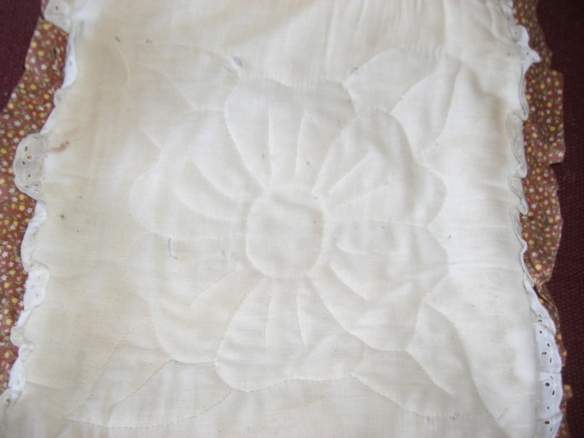 The front is pilling a little bit — I probably used cheap fabric. But we’ll see if it can be salvaged. I also found another pillow that I had spent hours embroidering and lost track of. Somehow it was stored in an open box and got all gunky. 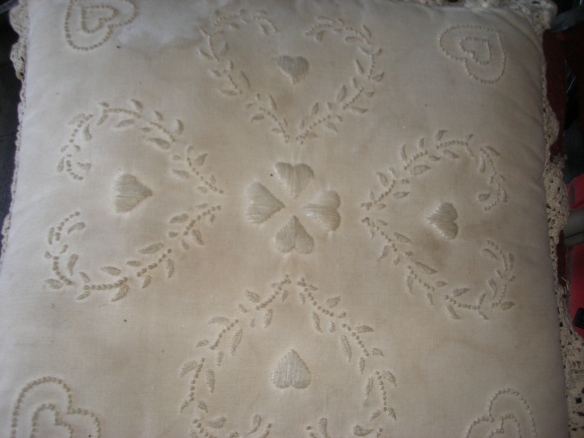 Any suggestions for cleaning it? I am going to take the old stuffing out and soak the fabric in…something. Woolite, maybe?

As I sorted through and threw away so much stuff (I did keep all of the above, by the way!) I felt so embarrassed that I had had it all sitting out there so long only to be tossed out. But I comforted myself with the fact that I have learned better now! I keep much less of that kind of thing and try to be discriminating about what I might really look at again and treasure and use in the years to come. So at least  I haven’t accumulated another several boxes to add to those from our years here. Well, maybe I have accumulated as much stuff or more — but it’s not boxes of clippings, anyway! 🙂

After a very hot several hours out there (thankfully it has electricity and we had an old fan going), two trips to the dump and one to Salvation Army (and no, that wasn’t all only my stuff!!), we’re maybe — oh — more than a third but less than half done? I’m hoping to do some more this week, but as there are other obligations this week, we’ll see.

And after we get the shed done — next is the attic!