Chapter 7 focuses on flower arrangements, and Edith reiterates that one need not become an “expert” or go to great expense or study to incorporate the principals she discusses. She mainly discusses centerpieces, arguing that at the table there “should be something to bring realization, a warmth of knowing that someone has taken thought and put some originality into preparing the place where food and conversation are going to be shared” (p. 100).

She argues that this should be done even when it is just the family at table or when one is alone, that it shouldn’t wait for “company.” “There is a ‘togetherness’ in sharing a prepared table that even very small children feel, although they cannot express it verbally. Instead of saying, ‘Oh, it doesn’t matter, it’s only the children,’ when you are alone with children for a meal, it is important to say the opposite to yourself. ‘I wonder what the children would enjoy most.'” (p. 104).

And centerpieces don’t even have to be flowers: she lists several suggestions using shells, mirror, candles, etc.

I have to admit that although I agree with what she says, we have never used centerpieces at the dining table. There just isn’t room. When passing food around at dinner, I think everyone here would rather be able to do so easily without having to work around something decorative in the middle. Our usual “centerpiece” is a cute napkin holder and the salt and pepper shakers. I do like to use nice tablecloths on holidays, but most of the time we use the table all through the day for other purposes, and I don’t want to have to keep moving a centerpiece in and out of the way.

But I do have artificial flower arrangements in several rooms and think they are a great way to add color and brightness. I have a couple of “wall pockets” for the front door where I can toss in a few seasonal flowers. 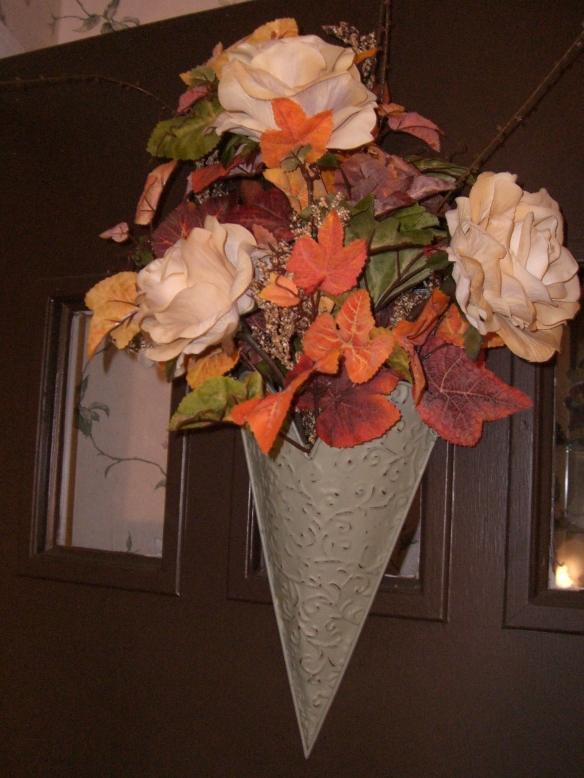 And I like to get fresh flowers every now and then, especially in winter when there is nothing much growing and I long for some color and beauty. But even a few flowers from something outside in a vase on the windowsill is a nice touch.

One good point she makes is that people tend to send an overabundance of flowers when a person is in the hospital, but then nothing during a long recuperation, so she suggests sending one simple flower or arrangement (not big expensive florist’s concoctions) each week or so to cheer the convalescent.

One of my favorite quotes so far in the book which could be a theme for the whole book is this:

“If you have been afraid that your love of beautiful flowers and the flickering flame of the candle is somehow less spiritual than living in starkness and ugliness, remember that He who created you to be creative gave you the things with which to make beauty and the sensitivity to appreciate and respond to His creation” (p. 109).

Although I don’t do centerpieces at home, I’ve enjoyed trying to come up with something unusual for our annual Ladies’ Luncheons for several years in our former church, and I thought you might enjoy seeing some of those. I looked for something unusual for two reasons: for one, I am not that skilled at flower arranging. Years ago a friend who had a florist shop in her home taught me how to do bud vases and corsages and hired me when she was super-busy, but I could never manage bigger arrangements. She could toss something together in 15 minutes that look gorgeous, and I could get the major flowers in ok, but agonized over filling it in. It took me forever and never looked right. The second reason was just that I liked to do something different each year rather than a water bowl with floating candles or flowers in it every single year. So, here are a few things we came up with: 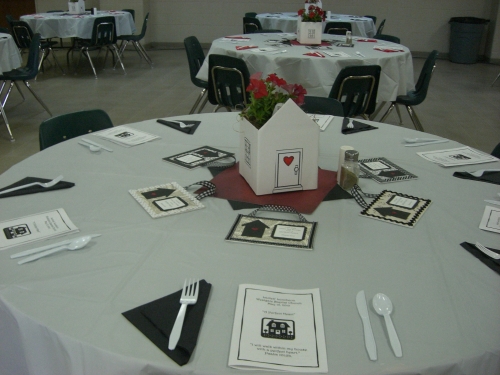 I don’t remember the exact name for the theme for this one, but the program centered around a one-woman interpretation of one of my all-time favorite books, Evidence Not Seen by Darlene Deibler Rose. We chose the rose, of course, because the author’s last name is Rose, and gold because of the overarching theme of faith in her life (I Peter 1:7: “That the trial of your faith, being much more precious than of gold that perisheth, though it be tried with fire, might be found unto praise and honour and glory at the appearing of Jesus Christ.”) One of my favorite things about this one was the gold curlicues – they had been red and we spray painted them gold. 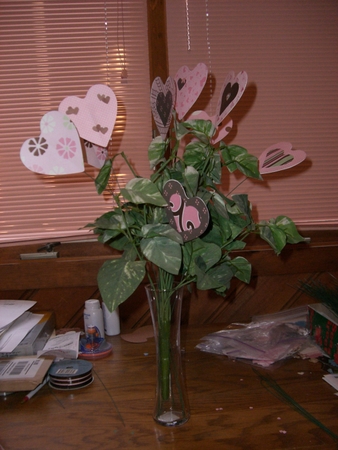 The theme of this one was ““The Heart of the Matter” from I Peter 3:3-4: “Whose adorning…let it be the hidden man of the heart.” The hearts were cut from scrapbooking paper: thankfully I had little punches for those shapes, so we didn’t have to cut them by hand.

These were the centerpieces in progress for the theme “The Well-Dressed Woman from Ephesians 4:21-24: “If so be that ye have heard him, and have been taught by him, as the truth is in Jesus:  That ye put off concerning the former conversation the old man, which is corrupt according to the deceitful lusts; And be renewed in the spirit of your mind; And that ye put on the new man, which after God is created in righteousness and true holiness.” I did go back later and cover the Styrofoam with Spanish moss and little paper flowers.

Those are all the ones I have pictures of in the computer: the other photos are in shoeboxes I need to do something with some time. But one of my favorites was on the theme of patterns from Titus 2:7, “In all things shewing thyself a pattern of good works,” and on each table we had a different craft and patterns: a bowl of yarn balls and knitting needles with crochet and knitting patterns in one, a few dress patterns and piece of fabric on another, etc. For another, the theme was “A Woman’s Adornment,” from I Peter 3:3-4, and we borrowed vanity trays from the ladies at church and set them with sets of gloves (also borrowed), little buttons that looked like brooches (from Michael’s), and little bottles that were meant to look like perfume bottles (I had originally wanted perfume atomizers, but they were hard to find and expensive) and a single rose.

I almost didn’t include these since they are churchy and not homey, but thought they might be useful in sharing some ideas that aren’t always “traditional” centerpieces. One of my Pinterest boards is Table settings – I like the simplest ones best. I might add some of them in to the Hidden Art of Homemaking Board.

More discussions on this chapter can be found here.

9 thoughts on “The Hidden Art of Homemaking, Chapter 7: Flower Arrangements”