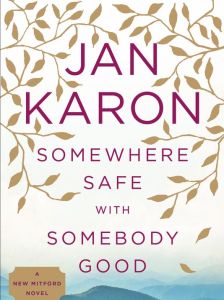 Jan Karon had thought that she had finished up the Mitford books, but her fans desire for more encouraged her to write another book about Father Tim in Mitford (according to this article, which also includes an excerpt from the first chapter.) Thankfully she indulged her fans, and her newest book is Somewhere Safe With Somebody Good, just released last month.

The last two novels are called Father Tim novels rather than Mitford books because in one he took an interim pulpit for a time somewhere else, and in the other he and his wife were in Ireland. A few of the Mitford folks were here and there, and the books were good – just not the same as the Mitford-based ones. This book is set squarely in  Mitford, however. And though visiting in Mitford is cozy, that doesn’t mean everything goes smoothly and perfectly. Different characters have serious situations to wrestle with.

Father Tim and Cynthia are just back from Ireland, and he feels a restlessness. He’s not sure what to do with himself in retirement. He has little odds and ends things to keep busy, even things that useful to others, but it is just not the same as having an overall purpose and focus that comes with a regular job, or in his case, church. Then, due to tragic circumstances, he is offered what at one time would have seemed like the ideal job. But should he take it? He had to retire due to health reasons. Could he manage the full time load again for a time as an interim, or would it be wiser to step aside?

As he contemplates this dilemma, he is also waylaid by another. Sammie, Dooley’s younger brother, was found in an earlier book and moved into Mitford, and though he could pass for Dooley in looks, his attitude and demeanor are quite different. He is out of control, out of temper, destructive, and about to be kicked out by his landlady. Nothing anyone does seems to get through to him. Of all of Dooley’s dysfunctional birth family, Sammie in some ways had the worst situation in living with his alcoholic father. Father Tim knows he can’t deal with him like he did  Dooley, but it’s hard to know just how to deal with him.

Meanwhile Hope Murphy, manager of the Happy Endings bookstore, is in danger of losing her unborn baby and even her business due to the need to be on bedrest. Father Tim and a couple of others offer to keep her shop open for a couple of days a week.

There are other subplots – aging Esther Cunningham, former mayor, thinks about throwing her hat in the ring again, a new eatery opens in town, an Internet romance blooms, someone discovers and unknown relative, and Coot Hendricks, who has always been a background character before, has a particularly sad and sweet storyline.

I think one challenge an author like Karon might have would be how to keep the Mitford books similar enough so they have that same familiarity to them, yet different enough so that they’re not just remixes of the same thing. I think she does that skilfully. This book was like a visit back home with a stop to see all the loved ones and neighbors, but there were enough differences to add more interest. For instance, Fancy Skinner, the motormouth hairdresser in hot pink, (never one of my favorite characters) in several of the books subjected Father Tim to an inevitable long harangue while she cut his hair and he couldn’t get a word in edgewise. In later books Karon has managed to include her and show her personality without having the same scene repeated every time.  Similarly, Mule Skinner never knows what he wants to order at restaurants, and the scenes with him are familiar enough to think, “Yep, that’s ol’ Mule,” but different enough that they don’t get boring.

Then, too, there are signs that everything is not quite the same, just like in real life. Different characters feel the effects of aging, one passes on, some have serious changes to deal with. I loved how Karon showed, without stating it, that Esther is really not up to running for mayor again and demonstrates how that “take charge” personality can manifest itself when one gets older.

As always in Karon’s books, there is an underpinning of faith naturally and seamlessly woven in.

Some of my favorite moments from this book:

When a young, bookish boy in the book store asks Father Tim about a book by Wordsworth (Father Tim’s favorite author), “He turned away for a moment, smacked by the beauty of complete surprise” (p. 197).

“Since retiring, he hadn’t been able to find the groove worn by all those years of priesting. Getting up at five had remained routine, as had Morning Prayer, but from there, routine staggered off the cliff around 7:30 a.m. and perished on the rocks below. He had missed being in a groove” (p. 217).

“‘You love him. I can see it’
‘More than anything.’
That alone should be enough, he thought, but of course it never is. Courage has to come in there somewhere, and perseverance and forbearance and patience and all the rest. A job of work, as Uncle Billy would say, but worth it and then some” (p. 337).

And a quote from Samuel Taylor Coleridge: “The happiness of life is made up of minute fractions – the little soon forgotten charities of a kiss or smile, a kind look, a heartfelt compliment, and the countless infinitesimals of pleasurable and genial feelings” (p. 440).

I loved catching up with the folks back in Mitford. I don’t know if Jan Karon is planning any more books. There was a distinct “wrapped up” (except for one storyline that I felt was left hanging, but I guess enough was said to give us an indication that everything would be all right) and refocused feeling at the end. But who knows? Maybe if her fans keep clamoring for more, she’ll keep indulging us.

9 thoughts on “Book Review: Somewhere Safe With Somebody Good”