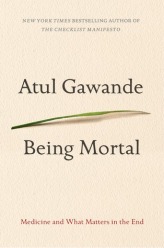 I could wrap up my comments on Being Mortal by Atul Gawande succinctly by saying that if you plan on getting old or dying or helping a parent as they age, you need to read this book. But I’ll try to give you a bit more to go on.

I don’t know that I would have noticed this book at all except that Lisa and Joyful Reader both mentioned it. I knew they had dealt with deaths of parents and grandparents, Lisa’s mom had been in assisted living and Joyful’s grandmother lives with her, so with their experience, their praise for this book meant a lot.

I ended up marking many more pages than I can possibly share, but it’s safe to say that much in this book resonated with me. 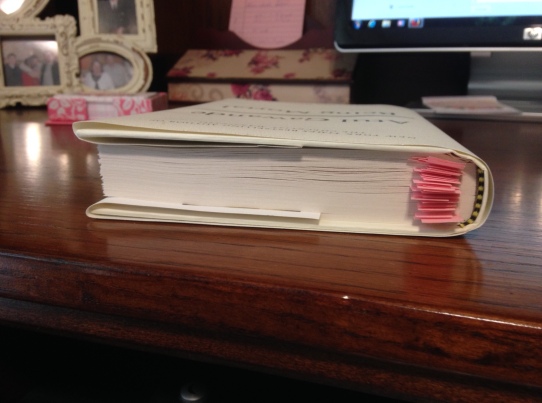 The subtitle of the book is Medicine and What Matters in the End, and it’s a frank treatment of end-of-life issues. Medicine, Dr. Gawande asserts, is geared to fix things. But in some cases the treatment is worse than the disease itself. And this tendency is part of what had led to institutionalizing people as they age and making it a medical matter rather than trying to give people in such situations the best days they can have in the time they have left.

Gawande notes that until fairly recently, most deaths occurred at home. Now most occur in hospitals and nursing homes “where regimented, anonymous routines cut us off from all the things that matter to us in life” (p. 9). In addition, it used to be that, unless you had a long, wasting illness like consumption, most deaths came suddenly like a thunderstorm. Modern medicine has been a marvel and a gift from God: many things that used to be fatal can now be treated. But like any gift, there are good ways and not so good ways to use it.

“The simple view is that medicine exists to fight death and disease, and that is, of course, its most basic task. Death is the enemy. But the enemy has superior forces. Eventually, it wins. And, in a war that you cannot win, you don’t want a general who fights to the point of total annihilation. You don’t want Custer. You want Robert E. Lee, someone who knew how to fight for territory when he could and how to surrender when he couldn’t, someone who understood that the damage is greatest if all you do is fight to the bitter end.”

I appreciated his explanation of how the style of doctoring has changed over the years, from the authoritative “Dr. Knows-Best” who made all the decisions for you, to “Dr. Informative,” who merely laid out all the options and let you decide. The problem with the latter is that we don’t always know how to process the options. When the author’s own father faced a tumor in his spine, he, his father, and his mother were all doctors yet felt overwhelmed by the information and options they were receiving. A third kind of doctor is called “interpretive” and gives information as well as guidance after asking what’s most important to you and what your concerns are (pp. 100-102).

Gawande proposes a series of questions to consider when the diagnosis is terminal, questions concerning what’s most important, what one’s goals and fears are in facing the time they have left. One man said he wanted to continue to eat ice cream and watch football on TV, and he wasn’t interested in any treatment that interfered with those activities: life wasn’t worth living without them. Some are willing to live with different degrees of disability and pain: some don’t want to suffer at all. It’s good for a family to have these discussions so they have some idea what would be the most important to their loved one. Sometimes it requires more than one hard discussion: “Arriving at acceptance of one’s mortality and a clear understanding of the limits and the possibilities of medicine is a process, not an epiphany” (p. 182), and your preferences might change over time as well. But these discussions are necessary to find the best means of “living for the best possible day today instead of sacrificing time now for time later” (p. 229).

Gawande also details the journey from being independent to needing assistance to needing full time care that elderly and their families face. We’ve faced much of this with my mother-in-law over the last few years. I especially appreciated the history of nursing homes and assisted living facilities and the goals and purposes that Keren Brown Wilson, who “invented” assisted living, had when she started, and how those were originally implemented and maintained and then encroached upon to the point that she had to resign from her own board. Nursing homes themselves “were never created to help people facing dependency in old age. They were created to clear out hospital beds” (p. 71).

Many of the problems he lists in assisted living and nursing homes were the same as what we had found: loss of autonomy and privacy, loss of purpose, “tasks [coming] to matter more than the people” (p. 105), “safe but empty of anything they care about” (p. 109). “Making life meaningful in old age…requires more imagination and invention than making them merely safe does” (p. 137).

In older history and in other countries, the old are revered as having great knowledge and wisdom: “Now we consult Google, and if we have any trouble with the computer we ask a teenager” (p. 18). At least one sibling used to stay with the elderly parent(s) and help care for them, and then got a larger portion of the inheritance or perhaps the family home in place of what they gave up. Now both parents and adult children value their independence. But “our reverence for independence takes no account of the reality of what happens in life: sooner or later, independence will become impossible” (p. 22). Yet the author researched and visited several creative ways for an older adult to retain as much independence and autonomy as long as possible.

One problem is that even though geriatric specialists have been shown to enhance the lives of the elderly, geriatric units are shrinking or being closed rather than growing. “97 percent of medical students take no course in geriatrics” (p. 52). One reason is that it doesn’t pay well; another is that insurance doesn’t see the need for it. It remains for those of us who deal with the elderly or who look ahead to our own old age to be aware of issues.

When I was first looking at information about the book, I was wary that the author might promote assisted suicide for those with terminal illnesses. He does not promote it, but he would support legislation to enable giving people lethal prescriptions if asked, noting that half of them don’t use them: they just like the assurance that they could. He does note, though, that in countries where it is legal, use has grown: “But the fact that, by 2012, one in thirty-five Dutch people sought assisted suicide at their death is not a measure of success. It is a measure of failure. Our ultimate goal, after all, is not a good death but a good life to the very end. The Dutch have been slower than others to develop palliative care programs that might provide for it….We damage entire societies if we let this capability [assisted suicide] divert us from improving the lives of the ill. Assisted living is far harder than assisted death, but its possibilities are far greater, as well” (p. 245). (A good Christian source on some of these thorny issues is When Is It Right to Die: Suicide, Euthanasia, Suffering, Mercy by Joni Earacekson Tada.)

He also points out that it is difficult to know exactly where the lines are sometimes. “We also recognize the necessity of allowing doses of narcotics and sedatives that reduce pain and discomfort even if they may knowingly speed death” (pp. 243-244). Sometimes it is wrong to turn off a ventilator: sometimes it is right. If a 20-tyear-old was diagnosed with Type 2 diabetes and wanted to let “nature take its course” rather than treating the illness, we’d try to convince her that the quality of life she could have with treatment would be well worth it despite the complications: it would be ridiculous to die of diabetes when there is treatment available and the possibility of a long, productive, and happy life. On the other hand, when my father was dying of various other issues and they suspected he had colon cancer, they decided not to put him through what would be involved in diagnosing, much less treating it, because in the long run it would not make a difference in how long he would live and would only make his last months miserable.

The author writes from a secular viewpoint. As a Christian, I thought a lot about how a Christian worldview would affect this topic. As Christians we know where we and our believing loved ones are going, which takes some of the sting out of death. But we don’t take it lightly or flippantly, either. Death is still called an enemy. We hold life as a gift from God and believe He is the only one with the right to end it. It is to be given back to Him and used for His purposes. Sometimes that includes suffering, yet we’re also called to alleviate suffering if possible. While there are fears about loss of independence and abilities in older age, we can trust God to help us through that time: And even to your old age I am he; and even to hoar hairs will I carry you: I have made, and I will bear; even I will carry, and will deliver you.  Isaiah 46:4. But issues and question the author brings up are needful to consider, preferably before crises hit. In some cases there is no one right answer for what kind of treatment to pursue: the answer will vary depending on a number of factors.

I like this summation near the end of the book:

I am leery of suggesting that endings are controllable. No one ever really has control. Physics and biology and accident ultimately have their way in our lives. But the point is that we are not helpless either. Courage is the strength to recognize both realities. We have room to act, to shape our stories, though as time goes on it is within narrower and narrower confines. A few conclusions become clear when we understand this: that our most cruel failure in how we treat the sick and aged is the failure to recognize that they have priorities beyond merely being safe and living longer; that the chance to shape one’s story is essential to sustaining meaning in life; that we have the opportunity to refashion our institutions, our culture, and our conversations in ways that transform the possibilities for the last chapters of everyone’s lives (p. 243).

13 thoughts on “Book Review: Being Mortal”