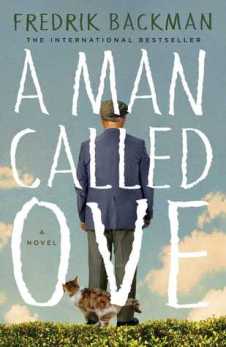 A Man Called Ove by Fredrik Backman first came to my attention, I believe, through Susanne’s review. When I first saw the name, I thought it was pronounced with a long O and A sound – Oh-vay. But the narrator of the audiobook I listened to pronounced it Oo-vuh. The book was written in Swedish and translated into several different languages.

Ove is only 59 years old, but seems older. He’s curmudgeonly, suspicious of anyone who drives anything other than a Saab and of salespeople trying to swindle him out of money. He is highly principled, performing daily inspections of the neighborhood to make sure no one is parked where they are not supposed to be (and taking down their license plates numbers if they are) and no one has violated any signs (which Ove himself put up).

Then his world is turned upside down when a new neighbor with a pregnant Iranian wife backs his trailer over Ove’s mailbox. He dubs them “the pregnant one” and “the lanky one,” and they continually and aggravatingly insert themselves into his life.

I mention this next part mainly because some might be sensitive to it: Ove is planning to take his life. His wife has died and he wants nothing more than to be with her again. He makes very detailed plans, and though he doesn’t believe in God, the universe, or destiny, every time he is about to end his life, something happens. Either someone needs his (unwilling) help, or something makes him angry enough that he has to deal with it first.

My favorite parts are the flashbacks describing how Ove went from the taciturn but dependable young man he was to the grumpy old man he became and detailing time with his father, his youth, his jobs, his hurts, but especially his wife.

People said Ove saw the world in black and white. But she was color. All the color he had.

But if anyone had asked, he would have told them that he never lived before he met her. And not after either.

She understood him as no one else had since his father. People questioned her choice when she married him, but no one else had ever looked at her like he had, “as though she were the only girl in the world.” And she understood when he did not share her love of Shakespeare but spent weeks making beautiful bookcases for her books. When he later meets a teenager who had been one of her pupils, and they talk of her,

And then they both stand there, the fifty-nine-year-old and the teenager, a few yards apart, kicking at the snow. As if they were kicking a memory back and forth, a memory of a woman who insisted on seeing more potential in certain men than they saw in themselves.

Overall the book is cleverly and wonderfully written, tender in some places, humorous in others, and the author has a nice way of setting seemingly opposite thoughts in juxtaposition (like Ove’s not believing in destiny when the way he met his future wife certainly seemed like Someone set up the situation).

The only major flaw is a smattering of bad language, including taking the Lord’s name in vain pretty badly and one incidence of the “F” word. Usually the latter is a deal-breaker for me, but as it happened towards the end of the book, I did finish it. I understand that a man like Ove who is not a Christian and is a curmudgeon is likely to talk like that. My own father talked like Ove, so it doesn’t shock me. But I don’t like to read books or watch movies with that kind of language because I don’t want those words floating around my head and possibly coming out accidentally. The F word, though, came from a different character who was particularly nasty. The thing is, I didn’t need that word to get that picture of her. The writing was clear enough that I got it without having to throw that word in there.

Sometimes I wonder if I need to give up on modern fiction all together, because it all seems to be spattered with bad language this way. I wish modern writers would get that they don’t need it.

I don’t know if it has been made into a movie, but it would be a good one – minus the bad language.