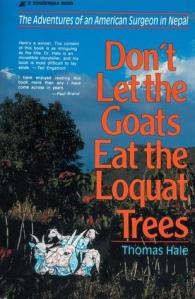 I saw Don’t Let the Goats Eat the Loquat Trees: The Adventures of an American Surgeon in Nepal by Thomas Hale mentioned at Lou Ann‘s, put it on my TBR list, and just finished it recently.

Thomas open his story with the realization of his need for Christ, even though he would have said he was a Christian before that. After truly believing on Jesus for salvation, he spent much time in the Bible as it opened up to him. He “asked God what He would have me do. I was disturbed by Jesus’ statement to His disciples: ‘If anyone would come after me, he must deny himself and take up his cross and follow me.’ I didn’t seem to be able to tone down that passage. It meant to me that if I was going to be a disciple of Jesus Christ, I had to go all the way, to hold nothing back, to give my entire life to God. That was a tall order, as I’ve found every day since.”

God eventually led him to prepare to go to Nepal as a surgeon, and along the way, led him to his wife, Cynthia, who was training to become a a medical missionary as a pediatrician.

Just two months before heading to Asia, their mission informed them that they were being sent not to the large hospital in Kathmandu that they had been expecting, but rather to a “small fifteen-bed hospital located out in the hills, a day’s journey from Kathmandu…still under construction…” without “even a road to it.” The change in situation would mean a completely different atmosphere: rather than a large, well-equipped hospital with culture and entertaining nearby, they’d be going to a “tiny, ill-equipped rural outpost” and a “crude, mud-walled house, where our neighbors would be illiterate and unkempt hill people.” “Cynthia made her biggest adjustment to life in Nepal right then and there.”

We might have been tempted to think how lucky Nepal was that we had come. After all, there couldn’t have been many fully trained surgeons and pediatricians in that little kingdom of twelve million people. That attitude, however, would have been the worst we could have harbored. Indeed, we had been warned of the harmfulness of such an attitude, warned that even a trace of superiority would create a barrier that would repel the friendliness and goodwill of any Nepali we met. At the same time we found that rooting out our deep and often hidden feelings of superiority–feelings of importance, of being advantaged on background and education, of having so much to offer–was no easy task.

One problem this entailed before they even left was the supply of surgical equipment that would normally be supplied by a hospital, but of course would be impossible for the small hospital they were going to. Hale details the miraculous way God provided for a multitude of equipment.

It’s fascinating reading of their trials in just getting to their hospital and home, landing on an “airstrip” that was not much more than a field, the difficulty of getting carriers for all of their things (including a piano, which the natives were not impressed by), accidentally killing a cow, which was considered the same as killing a man “and drew the same penalty–eighteen years in prison–if the crowd didn’t get you first,” adjusting to insects (“if you think you can kill ants faster than they can be hatched…don’t count on it”), learning to love the people, dealing with mistrust of the “foreign doctors” at first to eventually have the opposite problem of being overrun with people and needs. He shares many case studies and lively stories along the way. He shares, as well, many things he learned about himself and about living for God:

It took a mild-mannered and uncritical animal to make me see in myself those negative attributes that I had always attributed to other American surgeons. Facing two hundred angry men proved to be effective therapy for removing most traces of condescension with which I previously might have regarded them. It also improved my relations with missionary colleagues and with Nepali brothers and sisters in the church. I guess God had no gentler way of removing some of my imperfections; I only wish I could say, for His trouble, that He finished the job. But it was a start.

Much time and energy can be wasted on matters that are, at best, trivial.

The key to successful ministry will lie in their ability to assimilate that culture and to free themselves from the attitudes and prejudices of their own. They have been warned about the inevitable feeling of superiority, paternalism, disdain, impatience, and frustration that they are sure to experience and to which they previously may have considered themselves immune. Finally they have been told that the course of their entire missionary career will ultimately depend on one thing: their day-by-day, step-by-step walk with God.

Many times a worker arrives in a foreign land only to discover he doesn’t love the people quite as much as he thought. They are different; their ways are different. And the new missionary quickly learns that survival depends on his ability to adjust to the new people among whom he plans to live; he adjusts to them, not vice versa.

When medicine is given free, patients often sell it instead of taking it themselves; they’d rather have the cash.

We find it comfortable to sit back, fold our arms, and mutter to one another, “All they have to do is repent.” But is that what Christ did when He rose from where He was and, with unfolded arms, came into the world to minister to us? Taking Christ’s example, we need to minister to the world in every way we can. Each Christian, before God, must find out where his or her duty lies.

Love is the one quality the world can discern that sets Christians apart and makes Christianity distinct from every other religion. If we fail to act on this truth, we will lose our right to be heard and will enter the post-Christian era for good.

The only way we know to help our Nepali friends in a lasting way is to put them in touch with the God who is the source of love and who sent His son Jesus into the world to demonstrate it.

Those early disciples had only two fish and a few loaves, but they gave Him all they had. Is this not His word to us today—to give Him all our loaves and fishes, to give Him everything we have? Then, who can say what He would be able to accomplish in our time through us?

Some of the hardest parts to read are those where the hospital had to cut corners because of the overwhelming demand on their time and resources. I don’t know if I could have made some of the decisions they did, but then, I’ve never been in that situation. They did rescind some of them after a time.

Though I wouldn’t agree with just every little point in the book, overall I found it quite an interesting and eye-opening account and really enjoyed it.