How did it get it be two weeks into August already?!  Here are a few favorites from the last week:

1.My son and daughter-in-law’s 7th anniversary. Jesse and I had fun dropping in over at their house to deliver flowers, a card, and some chocolate.

2. Baby-sitting Timothy so his parents could go out for their anniversary. I wasn’t sure how he would do being away from them, but except for asking about them several times, he did fine. I’m glad he enjoys being here. They celebrated early on Saturday, going out for the morning and then out for lunch. Then they came to our house and made nachos for dinner. Trading baby-sitting for dinner sounds like a good deal to me!

3. The Olympics. I don’t watch athletics much, but there is something about the Olympics! I just wish they wouldn’t show the parts I like best late at night. 🙂

4. Spray paint. In addition the the cart mentioned last week, I painted this button decoration for my sewing room. I’m getting better at it! I’ve had the blue and white/beige one for a while, trying to decide where to put them up. They only other color they had was red, which I didn’t want, so recently I got another of the white-ish ones and painted it pink. I may paint that white/beige one a purer white at some point, though I do like the shading. Once again, on sale 40% off and purchased with gift cards. 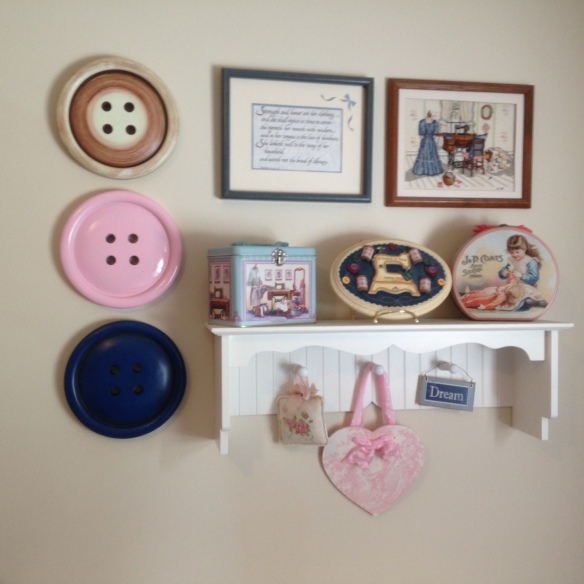 By the way, I did have the opportunity to use both Cricut machines on their new cart this week, and the set-up worked great!

5. A preview of gluten-free Texas Sheet Cake. Texas Sheet Cake is probably my favorite cake. Last year for my birthday we got a Coca-Cola Cake from Cracker Barrel, which is pretty close to it, but it was humongous and my gluten-sensitive daughter-in-law couldn’t eat it. My birthday is coming up later this month, and I found a couple of GF TSC recipes to see if anyone wanted to try their hand at it for my birthday, and if not, the Cracker Barrel cake would be fine again. Mittu did a practice cake this past week to test it out, and they happened to have it the evening I dropped in, so I got to try a sample. It turned out really well! A lot of GF cakes are kind of heavy, but this turned out just right. I am looking forward to more later in the month!

And a bonus for this week: anticipation! My oldest son is coming to visit from RI soon!