One of the things that stood out to me in Quiet: The Power of Introverts in a World That Can’t Stop Talking by Susan Cain was just how much society is set up for the extrovert, from schools to businesses. I don’t know if she mentioned assisted living facilities or nursing homes, but I found that they, too, were developed primarily with extroverts in mind.

Most activities at the facilities my mother-in-law has been in involved  trying to get everyone together in the common room for some event or performer. We’d get a calendar of events every month, filled with exercise classes, bingo, craft times, magicians, movie nights, and various groups coming to sing. I’m sure many of the residents loved a lot of those opportunities.

My mother-in-law was always content with a small circle of friends. She never drove. Her husband got groceries and ran most errands. She enjoyed going to church and helping with Awanas there until she couldn’t hear well enough to continue. A big portion of her dislike of getting together in large groups had to do with her hearing. She has worn hearing aids in all the nearly 40 years I have known her, and she told me once that in crowds, the aids magnified everything, so it was not only hard to pick out the voice of the person you were talking to, but it was unnerving that everything was so loud (they may have improved on that aspect now – I’m not sure). But even besides the hearing issues, she preferred home to just about anywhere else. They loved to go visit family or a handful of close friends, or go and get wood in the hills for their wood stove. She didn’t have many hobbies besides reading, her favorite activity when her work was done. She and her husband loved to watch the Atlanta Braves baseball games together and tinker in their garden or around the house.

One of our reasons (not the main one) for having her in assisted living rather than in our home was so that her world wouldn’t be reduced to just us. But when any of the aides asked if she’d like to come for whatever was going on down in the common room, she’d politely say no, she’d like to just stay in her room and read her book. Occasionally they could get her to if they didn’t ask, “Would you like to…” but rather just said, “It’s time for…” If they started helping her out the door for something that she seemed to be expected to do, she wouldn’t protest, though she didn’t like it (you do have to be careful of that kind of thing, though, so that you’re not running roughshod over their wishes). But once when I walked in and she was out with the others listening to a church group, she couldn’t understand what they said when they were talking, but she could get enough of the melody of old familiar hymns that she could sing along.

Once when I was trying to encourage her to participate more and telling her it would be good to get out of her room sometimes, she said, ” I DO get out of my room three times a day for meals!” Residents had to go to the common room for meals and sit at a table with two or three others (unless they were sick, and then a tray was taken to their room). And I thought, that’s true, and that’s quite a lot of social interaction compared to her life before assisted living. So I didn’t urge her that way any more.

She enjoyed coming with us to my son’s basketball games and to our home and church. We would take her out to eat with us sometimes, and I could tell she was tense and not entirely comfortable, but as long as we ordered for her (so she wouldn’t have to) and stayed close, she was fine.

Now, of course, with her decline over the years, her lack of mobility and speaking, about the only place she goes is outside occasionally in her wheelchair.

I know it was more cost effective and needed fewer workers to do things as a group rather than have one-on-one activities. There were just a few individual activities they did that worked well. A couple of the places would bring in therapy dogs and take them to individual rooms for residents to pet and interact with for a short time. She always had pets until assisted living, so I think she enjoyed that. One activity director would come to her room and paint her fingernails. I don’t think she ever painted her fingernails in her life before that, so I never knew quite what she thought about that one. But at least it was one-on-one.

My husband and I often thought that someone could make a business out of being a personal trainer in those kinds of facilities. My mother-in-law was under a physical therapist’s care at different times, but eventually their time with a patient comes to an end, and they leave them with a list of exercises. My mother-in-law never did the exercises on her own and didn’t want to go down to the group exercise classes, but she would work with the physical therapist (as she declined, she needed my husband to be there for the first few sessions so they could learn to communicate with each other. He was from Croatia, and she couldn’t understand him, so he thought she was just being uncooperative, and she didn’t really care if he came back or not.

But after just a few visits with my husband there to interpret for her and urge her on, and showing the therapist how to communicate with her, they got along quite well.) We didn’t want our own visits with her to be all about exercising, so it would have been nice if there was someone on staff, or even someone who worked with different facilities, to come in and help people with their exercises.

One lady who used to visit my mother-in-law used to read and discuss with her parts of the Reader’s Digest, her favorite magazine. Nowadays, visitors often read a part of the Bible to her, valuable since she can’t read for herself any more (it’s important to remember if you are reading to someone with hearing problems that you stand or sit where they can see you clearly and speak loudly). Other one-on-one activities that we’ve done and others could do are taking her outside (one facility had a lovely screened in porch) for a change of venue, looking through pictures or photo albums with her (people love to talk about their families), or show her things on the computer. Sometimes when we had her over for a meal, my husband would show her some of the family members’ Facebook pages, or use Google Earth to see some of the places where they used to live. We talked some about her life before I knew her (I discovered she had been the editor of her high school newspaper!), but I wish I had done that more and then written it down. I also wish I had come up with some bit of interesting news or information to share with her. Often our conversations would start out with, “Well, what’s new?” And I’d reply, “Well, not much.” When you visit someone almost every day there is really not much new every visit. I did share family and church news and sometimes current events, but I wish on those days when I didn’t have anything new to share that I had taken the time to look up or come up with something she’d find interesting. I also wish I had put some of her old photos in a scrapbook with her, not just for the activity, but to hear more about the people in them.

Although my mother-in-law would not have had the dexterity or interest in these, some might enjoy games or puzzles (although she did enjoy Scrabble sometimes at our home. We had to take it very slowly and she’d argue with us about words like “qi” and “xi.” 🙂 ). Some might even enjoy some of the group activities if they have a companion they know to go with them, at least the first few times.

The biggest help, though, both in any facility or in our home now, is just visiting with her personally. At different times over the years different individuals from our church would take it upon themselves to just go see her. Sometimes different groups within the church or community would make something for residents and bring it to their rooms, and that was nice, but really, the main help was just a short time of personal conversation and interaction.

When I was in college, one of the ministry groups I participated in for a couple of years was a “foster grandparent” program. There were other groups from college who would do Sunday morning and week night services at a nursing home, but our group would ask for names of residents who didn’t get as many visitors, and we would each choose two and then spend Friday nights visiting those two, just to talk and get to know them. I still have fond memories of “my ladies.”

Of course, staff members do not have time to do all of these things, and some are best done by family. But for those like the activities director who only painted fingernails, ministry groups, and individual visitors, these are a few ideas of things to do with one older person rather than a group activity.

Social interaction is important to every person, but introverts prize it on a smaller and more infrequent scale, with one or two people and quieter activities. That may be a little more time- and labor-intensive than group activities, but it can be highly valuable for both sides.

For more in the Adventure in Eldercare series, click the graphic below. 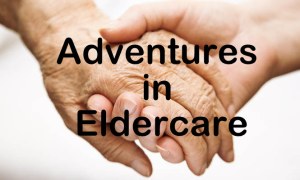 (Sharing with Inspire Me Mondays)

10 thoughts on “The Introvert in Assisted Living”