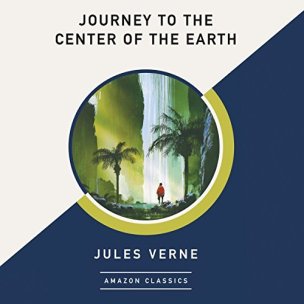 Journey to the Center of the Earth by Jules Verne opens in Hamburg in 1863, where Professor Otto Lidenbrock has just come home with a prized Icelandic runic manuscript which he is eagerly showing to his uninterested (but pretending to be interested) nephew, Axel, who is also his ward and assistant. The professor’s enthusiasm is diverted, however, when an old piece of paper falls out of the book and is discovered to have a message in code from “Arne Saknussemm!…another Icelander, a savant of the sixteenth century, a celebrated alchemist.” After hours of trying to decipher the code, and asserting that neither he nor anyone else in the house will eat until they have figured it out, he darts out of the room in frustration. Axel works on it a bit, and, to his own surprise, figures out the message – but then determines that his uncle will never know it lest he act upon it. Suffering from hunger, however, Axel finally yields the message, which is:

“Descend, bold traveller, into the crater of the jokul of Sneffels, which the shadow of Scartaris touches before the kalends of July, and you will attain the centre of the earth; which I have done, Arne Saknussemm.”

And act upon it the professor does, immediately preparing for himself and Axel to go explore an extinct volcano called Sneffels (or Snæfell) in Iceland. Part of the professor’s interest is his regard for Saknussemm, but in addition there is a raging controversy about whether the center of the Earth is cold or hot, and this will be his chance to prove his thinking is right. They hire a quiet but handy hunter named Han as a guide, and their adventure begins, fraught with both excitement and danger.

I have to admit I didn’t like this story nearly as well as the two other Verne books I have read, Around the World in 80 Days and 20,000 Leagues Under the Sea. I think part of it was that the scientific aspect was so improbable, but also the characters don’t change or grow much at all. There is some suspense in determining whether the Professor is an intrepid explorer contrasted with Axel’s neurotic cowardice, or whether Axel’s is the voice of reason vainly opposing the professor as a mad scientist. I did read somewhere that Axel is a teenager, which would make his behavior make more sense, but I tried to find that in the book and couldn’t locate it.

I listened to the audiobook pretty well read by Derek Perkins. My only quibble is that even though Axel is the narrator of the story, Mr. Perkins uses a different voices for him as the narrator or the character, when they should sound the same. The German accent only comes out when Axel the character is speaking.

I looked through the Project Gutenberg version online while searching for Axel’s age, and was surprised by some subtle humor I had missed in the recording. Usually it’s just the opposite: usually I catch nuances in listening that I miss while reading. I don’t think I’ll be revisiting this book, but if I ever do, I’ll read it next time and see if that makes a difference.

There are a variety of translations of this book, and one, for some reason, changes the names of the professor to Hardwigg and Axel to Harry or Henry and rewrites portions of the book. I’d avoid that one. Wikipedia has information on other translations as does this post.

I also would not have considered this a children’s book, and Common Sense Media says, “Verne was writing in an earlier era for a mostly adult audience, presumed, if they were literate enough to be reading novels for pleasure, to be very well educated. The vocabulary is advanced, the descriptions lengthy, and the scientific and literary references removed from the experience of most young readers. Experienced teens will enjoy it, and younger experienced listeners may enjoy hearing it read by an adult with the patience to stop often for explanations.” However, Wikipedia says it was originally published in a boys’ magazine.

Wikipedia also says, “The genre of subterranean fiction already existed long before Verne. However, the present book considerably added to its popularity and influenced later such writings. For example, Edgar Rice Burroughs explicitly acknowledged Verne’s influence on his own Pellucidar series.” So it has its place in literary history, and it was probably a lot more believable then, or, if nor believable, at least enjoyed as an adventure story.

Have you or your children ever read Journey to the Center of the Earth? What did you think of it?

8 thoughts on “Book Review: Journey to the Center of the Earth”