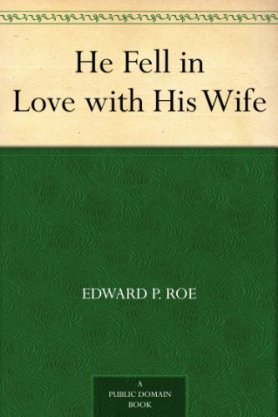 I first encountered He Fell in Love With His Wife by Edward Payson Roe at Carrie’s review at Reading to Know (which is currently offline, so I can’t link to it just now.) It sounded so good that I got it when it came up for free on the Kindle, but I just got to it the last several days.

This is the sweetest story – not in a syrupy or cloying way. It’s the first book in a long time that had me trying to squeeze in extra minutes to read and missing the characters when I finished.

The story opens with James Holcroft at a low point. His only ambition was to enjoy a quiet life on the farm where he grew up. He had married a quiet, sensible girl he had known since childhood, and though their relationship wasn’t a highly romantic one, they had “something that often wears better—mutual respect and affection.”

But his wife had died a year before, and on top of missing her, he found he was having a hard time working the farm alone. He was just about to give it up, but he decided to try hiring a housekeeper. The two he tried, however, made his life much worse.

He decided to sell his stock, went into town for that purpose, and stopped to talk with his friend who ran the poorhouse. His friend told him of a woman there, Alida, who was in dire straits. She had been deeply wronged and felt horribly ashamed and feared town gossip, even though her troubles were not her fault. She currently had almost nothing to her name.

Holcroft’s heart went out to the woman after he heard her story, and eventually he devised a plan to help them both. His previous housekeepers were older widows, and one had a daughter, so it was acceptable for him to employ them at his out-of-the-way farm. But Alida was near his own age, so he suggested that they have a “business” marriage in name only.  She could help him on the farm, and he would provide for her, and the marriage would protect her reputation. The quietness and remoteness of his home appealed to her, and he seemed a kind man, but she was afraid the stain of her background would taint him. After a lot of discussion, though, they agreed.

Of course, the title tells what happened. This isn’t the first story of a “business” or arranged marriage where the couple truly came to love one other. But this avoids silly, flighty romance and portrays a mature story of two wounded souls finding healing and respite, and for Holcroft, a faith he thought he had lost.

Some parts, especially with the first two housekeepers, are quite comical, but the rest of the story is full of warmth and pathos. Since it’s written in an older style (it was published in 1886) it’s more descriptive than current books, but to me the story flowed nicely without getting bogged down as some older narratives do.

Just to forewarn some of you, there is one expression in the book that today is considered quite vulgar, but I think it can’t have meant then what it does today, partly because Roe was a Presbyterian preacher, and partly because I hadn’t heard the term myself until the last few years. I don’t usually read or listen to much where I know I am going to come across vulgar terms, so I am sure it has been around longer than I was aware. Still, nothing in the character of the book would lend itself to thinking it was used then as it is now. Plus Holcroft reacts to some rabblerousers  in a way we’d consider violent today, but it seems to have been taken in stride then.

I wasn’t sure if this book would count as a classic: I wanted to include it for my Back to the Classics challenge under the category of a “classic by an author that is new to you,” but, just because a book is old doesn’t mean it is a classic. However, according to Wikipedia, Roe’s books were “very popular in their day,” and they are still being read for enjoyment today, so that sounds like a classic to me!

15 thoughts on “Book Review: He Fell In Love With His Wife”