It’s the last Friday of July! A good time to stop and reflect on the last week. Here are some of the highlights:

1. Under-cabinet lights. I had received these as a gift for Mother’s Day, but we just got them installed last weekend. As easy as they were, I probably could have installed them myself! But I didn’t know that beforehand. Thanks to my husband for putting them up for me. It’s nice to have light on the counters that were previously in the shadows.

2. Reduced price on a desired purchase. When we moved into this house, I purchased some pink toile towels from Target for the master bathroom. The bath towels are still in good shape, but the washcloths are long gone, and the hand towels are getting raggedy. It’s hard to find bath items in a regular old light pink. Decorating pinks either look like bubble gum or have gone from reddish to peachy, and now they have something called blush, which looks like a pinkish beige to me. I haven’t been able to find hand towels with the shade of pink I want in any design. On a recent Internet search, I found some toile ones that looked just like my originals! But they were about twice the price I wanted to pay. They were a “Buy It Now” purchase rather than an auction. I watched them for a few days to see if the seller would drop the price. She didn’t, so I sent her a note to ask if she’d accept a lower price. If she’d take one price I proposed, I’d take two of the towels: if she’d take an even lower price I offered, I’d take all three. She accepted the lowest price! I’m not usually a bargainer, but since I couldn’t find anything like these anywhere else, I ventured forth – and I am glad I did. 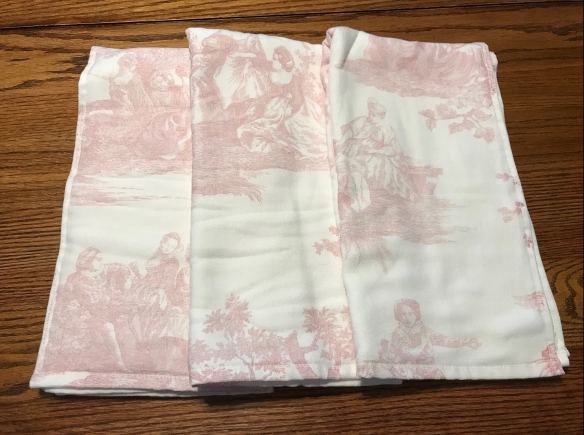 3. An uneventful cardiologist’s visit. I had a follow-up visit from last year’s ablation surgery for atrial fibrillation. Everything was routine, and I don’t have to go back for a year unless problems come up. If everything is still okay at that time, I’ll be released from his care back to my primary care doctor. I still have some flutters and palpitations, but they last for just seconds instead of hours, and he said I’d probably always have them.

4. A morning outing. The day of the doctor visit, I was chafing at having to get up early and drive so far for the appointment. But afterward I stopped by Joann’s and used some gift cards, then got take-out lunch at Cracker Barrel, along with my favorite Coca-Cola Cake. So it turned out to be a pleasant morning.

5. Bluetooth headphones or earpieces. This was another gift from a while back that we just got set up. It will be nice to listen to an audiobook or music that way without the long dangly cords from my previous headphones.