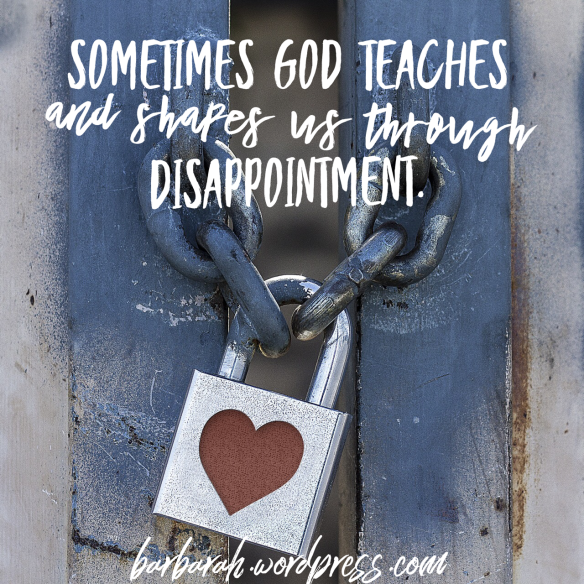 No one likes to disappoint others. We’ve experienced disappointment when others have failed to live up to our expectations, and we don’t want to inflict that on anyone else. Too many people only give half an effort, or are too self-absorbed to extend themselves to others, and we don’t want to be like that. We want to do what we can for others, and we want the important people in our lives happy with us.

Those perfectly natural desires can become an unhealthy obsession, leading us to become frantic “people-pleasers” motivated by self-love due to how good we feel when we meet others’ needs.

But aside from that lopsided perspective, it’s certainly not wrong to want to please others in whatever legitimate way we can. Yet we soon find that we just can’t do everything that everyone would like for us to. Randy Alcorn wrote once that he had to say no to about 99% of the requests that came his way. The standard reply his assistant sends to most requests is, “Randy has to say no to the great majority of good opportunities so that he can say yes to the very few God wants him to do.”

It’s a hard balance to maintain, to be available to minister to others as God wants us to, even to the point of pain and self-sacrifice sometimes, yet not to spread ourselves so thin that everything suffers. Randy honed in on the key: finding out what God wants us to do. You’ve heard the old illustration of the professor showing his students that pouring in the small things into a jar first left no room for the big ones. But when the big items were put in first, and then the smaller ones fit around them.

And we can trust God for the disappointment this will cause others. If He does not want us to meet their request, He has another person or plan in mind. Maybe your lack of availability will be the catalyst someone else needs to step up. Maybe a lack of someone to fill that need will lead those involved to see that that program or ministry or whatever needs to be set aside or changes need to be made. During the few short years we home-schooled, we were part of a large home school support group that had grown from a handful of moms. When the lady in charge of it had to step down due to the birth of her seventh child, the group floundered for the next year. But in the meantime, the moms decided they really did want the group to continue, and several different ladies took different aspects of it. It had gotten too big for one person, but no one really realized that until that person had to step down.

One thing we learn when others disappoint us or have to say no to a request is that they are not God. Only He can meet all of our needs. I can’t meet all of anyone else’s needs, either. I don’t have to feel guilty that I can’t.That lack may cause them to lean more on Him.

But even He disappoints people. When Jesus lived in Earth, other people had certain expectations of what the Messiah would do, but Jesus did not meet them. Once, after healing and casting demons out of people the day before, Jesus went out alone to pray. When the disciples found Him, they told Him everyone was looking for Him, presumably to come back and keep healing. But He said, “Let us go on to the next towns, that I may preach there also, for that is why I came out.” Though He did heal as part of His ministry on earth, His main purpose was to preach.

In those cases, Jesus didn’t disappoint them deliberately, but He couldn’t do what others wanted because it wasn’t in line with His and the Father’s mission. Sometimes those people were seeking their own desires or they misunderstood His purposes and character. Part of their adjustment to right understanding was having wrong expectations unfulfilled.

Other times, he disappointed people temporarily because He had a greater purpose in mind. Mary and Martha grieved when Jesus did not respond to their summons that Lazarus was sick until it was too late. But a greater miracle than healing awaited them all, and a greater demonstration of who He was. If He had come at their first request,  everyone would have expected Him to heal Lazarus. And if Lazarus had died while Christ was present and then Jesus resurrected him, there may have been some accusation of collusion or trickery. Sometimes He has to say no to this request because down the road He’s sending that.

In Paul’s case, God said no to his request that his thorn be removed because God wanted Paul to know His grace in a special way, and that example has provided comfort for countless readers even hundreds of years later.

Parents understand that they have to disappoint their children sometimes. Though they’d dearly love to meet every request, to do so would be unhealthy and unwise. Children don’t always understand why they can’t eat candy for breakfast, or why they need a nap, or why they can’t play in the street or go to the zoo. Learning that we can’t have everything we want when we want it is is a life lesson we all need and a step toward maturity. Then we understand that everything we want isn’t good for us and it’s a mercy we don’t always get it. Likewise, though we don’t always understand what our heavenly Father is up to, we trust His love and wisdom when He delays or refuses a request.

Sometimes we disappoint people without even realizing it. We didn’t know they had certain expectations. We won’t know unless they tell us. Newly married couples experience this as they adjust to living with each other and getting to know each other better, and of course people interacting in almost any way can experience this. If someone disappoints us in that way, we don’t sit back and fume or withdraw from them because “they should have known.” We have to decide whether we should just overlook the issue and manage our expectations or have a talk with the other person, but we don’t expect them to be mind readers.

There have been times I firmly believed the person telling me “No” was in the wrong. Someone instilled in me a long time ago the principle that “You can’t say no until you pray about it.” Sometimes I have faced opportunities that were too big for me, yet I did not feel the liberty to say no to them, and I saw God work and provide in marvelous ways that I would have missed if I had followed my first inclination and said no. But it was not my place to convince others that God really wanted them to do what I asked. As I appealed to God, He could either change the other person’s heart or supply someone else to meet the request.

If disappointment is a feeling that results from someone else failing us, Jesus experienced that every day. But the time that most touches my heart was in Gethsemane. Many times Jesus went out to pray alone, but that time He wanted the companionship of His friends to watch with Him before the events leading up to the cross were going to start. But they fell asleep instead.

If we’re in authority over someone else, as a parent, supervisor, teacher, mentor, etc., sometimes we have to deal with their failure to meet expectations in more stringent ways. Sometimes a rebuke, reminder, further instruction and training, or even punishment is needed. Jesus certainly employed each of those when dealing with people. But sometimes, as in Gethsemane, He extended grace, acknowledging that those who disappointed Him were only human. “As a father shows compassion to his children, so the Lord shows compassion to those who fear him. For he knows our frame; he remembers that we are dust” (Psalm 103:13-14, ESV).

And if someone actually sins against us, the Bible prescribes methods of confronting them and admonitions to forgive them.

So, to come full circle: when others disappoint us, we respond in whatever way is needed. If it is a matter of actual sin, we may need to take other action. If we’re in a position of authority over them, we don’t let them get away with laziness or lack of effort, but we understand that no one is perfect. If we’re not their authority, we may try to persuade them to take the matter to God before saying no. But if they still say no, we leave it with the Lord to change their hearts or to provide another way.

And because we want to treat others as we want to be treated, we don’t say no to others callously or lightly. We seek the Lord to see whether this request is from Him, even if it seems beyond us, and we depend on Him to enable us. But we understand that we cannot meet the needs of everyone in our sphere of influence. We are not God: only He is. If we have to say no, we do so kindly and encourage others to seek Him for their needs, trusting that He will either meet their needs in another way or give them the grace to do without. If we’ve sinned, we confess that to the Lord and the other person, repent, and do what we can to make restitution. If we have disappointed someone unwittingly, we apologize, talk out the issues, and correct our actions accordingly as much as possible.

But on either side of disappointment, we come to know that no one loves us as thoroughly as God does, no one else is as wise, no one else has the power and provision to meet all our needs. And even if He seems to disappoint us sometimes, we trust that in His love and wisdom, He has something better in mind than what we originally wanted. And sometimes He teaches us, grows us, shapes us, matures us through lessons of disappointment.

What have you learned from disappointment?