As I am sure has been true for many of you, May was a rather quiet month. Mother’s Day was the only big event on the calendar. We enjoyed roasting hot dogs and making s’mores for Memorial Day. Most days just held everyday activities.

We had several socially-distanced visits outside with my son’s family at our house and theirs. Thankfully the weather has been pretty comfortable this month for outdoor gatherings. Since our state began opening up a little, and since the COVID cases in our area are low compared to others, we did start visiting inside (just in time to come into the air conditioning from hot weather). But otherwise we’re holding back from jumping full-fledged back into the fray.

Our church discussed meeting together again, and most wanted to wait for a bit. So we’ll still Zoom for now.

I’ve been distressed by the judgmentalism and name-calling in social media over simple things like wearing face masks, even among Christians, even among friends. I’ve had some ideas brewing for a post about it all, but probably should abstain. There are multiple facets to the COVID-19 crisis and multiple opinions even among experts, so it seems like we should give each other plenty of grace and room to differ.

Besides what I mentioned above, some of us were watching or listening to the SpaceX launch preparations, which had to be scrapped due to weather. Jason texted this picture of Timothy.

I asked Jim why the astronauts were being strapped in so early, then answered my own question by saying they probably had a lot of pre-checks and such to go through. Then I said, “If it were me, I’d have to say ‘You can strap me in now, but you’re going to have to let me up to use the bathroom before we leave.'”

Jim said, “That’s why you’re not an astronaut.”

I mentioned on a Friday’s Fave Five that my son’s Ring camera caught a guy peeking into their window for several minutes. My son spoke through the camera and the guy ran off, but the police were called and investigated the area. My son had recently had a run-in with poison ivy in their back yard, even though he had been wearing gloves. When Timothy learned that the “peeper” had run towards the back, he said in a singsongy voice, “There’s lots of poison ivy back there.” 🙂

Timothy just turned six in April. This month he was telling me about something that happened “a long time ago when I was five.”

I’ve mentioned before that Timothy loves to mow, especially when his Granddad brings over the riding lawn mower. Timothy has his own toy riding and push lawn mower and garden tools. His dad recently texted this comment from Timothy: “If you have a big yard, a push mower will make you very tired. I did that one time, and I wanted to stop, and I changed my mind to not give up.”

His mom and dad will sometimes take a bite from his plate and call it a “dad tax” or a “mom tax.” Monday, when we were eating outside for Memorial Day, Timothy had finished and gotten down to play. Then he came back, grabbed a couple of french fries from the bowl, and said, “Tim tax.”

It was sad to realize that all of the older women I had looked up to as moms, in addition to my own mom, are gone now.

The only Mother’s Day card I made this year was for my daughter-in-law, who likes purple and lavender. It didn’t turn out quite like I was picturing it in my mind, but I think she liked it. 🙂 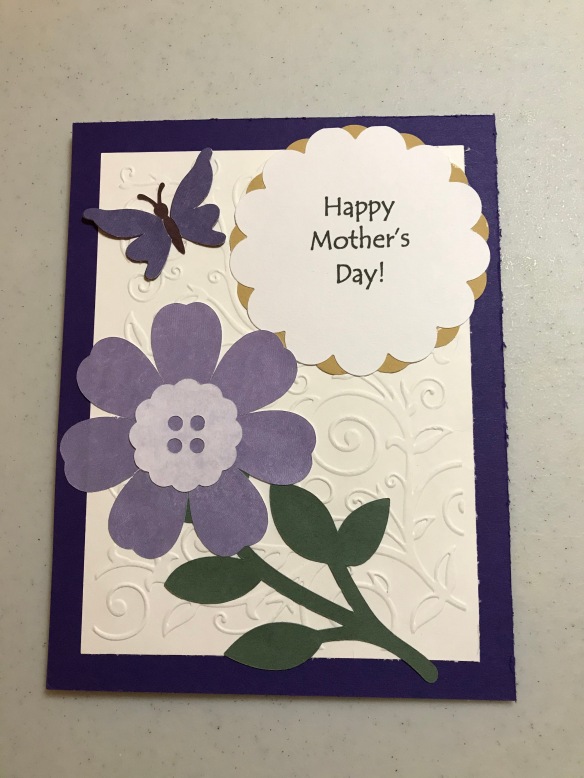 I also finally finished making masks for the family. I had done them for everyone except Jesse and me, since we haven’t gone anywhere (and Jeremy in RI, because he already had some). But I wanted to get them done just so we’d have them when we needed them. Plus, we’re talking about using them even after our church meets in person. I’m not a good enough seamstress to do this for others, and none of them is perfect, but at least we’re covered—literally and figuratively. 🙂 And it was good to finally cross them off my to-do list.

Laura and Hope had both recommended This Beautiful Fantastic, and I loved it. It’s on Amazon prime, but I think it’s also on YouTube. It’s about a very OCD girl who learns that letting other people into her life can be messy but beneficial. It’s also about writing and gardening and grumpy neighbors. It’s quirky and had me smiley and teary at the end. Objectionable elements: I think there are a couple of “damns” or similar bad words, and an old man in a Speedo near the beginning (but that’s more gross than sexy).

I also very much enjoyed The English Game, a six-episode mini-series. I care very little about football (soccer), but I could appreciate the struggles of changing it from a “gentleman’s” game to make it more accessible to working men, and the controversy over whether to allow paid (professional) players. Differences got violent a couple of times, but I loved how the two main characters strove to come to an understanding of each other and wanted what was best for the good of the game. I read later that though the people and some of the plot basics were real, some of the points weren’t historically accurate. But I still enjoyed it. There are a few bad words, and sadly, a couple of instances of taking Jesus’ name in vain.

I also enjoyed some of John Krasinski’s “Some Good News” YouTube videos.

This month I completed (titles link back to my reviews):

Up next, I have these to choose from, plus scores on my Kindle app. I need a reading vacation! 🙂

Here are some of the posts from this month:

I still haven’t gotten to my WIP (work in progress). But I did submit a devotional and a guest post and am waiting to hear if they are accepted.

I also listened to several webinars and podcasts on writing. I appreciated that the webinars were offered for free to make up for some of the writing conferences that had been canceled. I got a few nuggets from each one. But I am thinking that, for the time spent, reading books might be better for me. With the webinars and podcasts, there’s always a bit of banter and often a rabbit trail or two. The q-and-a webinars were great to submit questions to, but they also covered a little bit of ground on a great many aspects of writing. But a book would present whole topics from start to finish, and I think my particular learning style would benefit from them more. I have several books on writing on my shelf and in my Kindle.

But beyond reading about writing—I need to just write!

Even though summer doesn’t officially start for a few weeks now, June 1 always signals the first of summer to me. Since our children are no longer in school, our schedule doesn’t change much any more between spring and summer. We don’t have any major plans until August, when we hope our oldest will be able to come for his and my birthdays. We’ll see what happens! This is a season of holding plans loosely, for we truly don’t know what  day will bring forth.

How was your May? What are you looking forward to in June?

(Sharing with Let’s Have Coffee, Grace and Truth, Faith on Fire, Global Blogging,
Senior Salon, Hearth and Home, Inspire Me Monday, Tell His Story,
InstaEncouragement, Worth Beyond Rubies)

26 thoughts on “End-of May Reflections”