Wow, July has gone by fast, hasn’t it?

We’ve had a fairly quiet month. Our local COVID-19 cases and deaths are still rising rapidly, so we’ve pretty much been staying at home as much as possible. We do get together with my son and daughter-in-law and grandson since they’re mostly sheltering at home as well.

The heat and humidity would be keeping us inside even if the virus wasn’t.

We had a fairly traditional 4th of July with grilled burgers. All the major fireworks displays were canceled, but we saw several around the neighborhood.

Jason’s family and my husband camped out in their yard and then in ours to get Timothy used to it before camping away from home. He enjoyed it!

Once again I have none! There have been a few times he’s said something cute, and I’ve thought, “I need to write that down.” But then I forget.

He’s in the tooth-losing stage of life and currently has three out in front. So cute!

Jason’s birthday was this month. Since he had asked for some camping equipment, I went with that theme for his card: 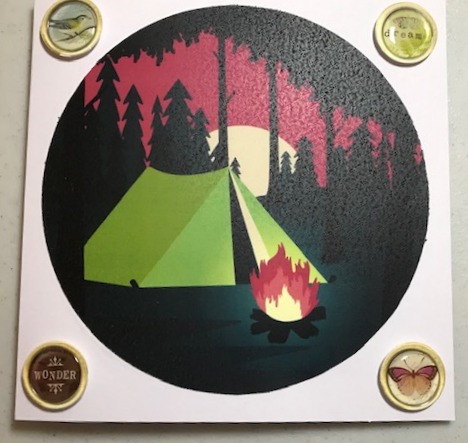 The Cricut has some designs that can be printed out, and this was one. It came out darker than it looked on the computer. The things in the corners are some button-like stickers.

I don’t usually show the insides of the cards I make, but they can be the hardest part. I don’t want to say the same thing every time. With this one, all sorts of camping terms flooded my mind, so I wrote them down to see what I could come up with.

While riding my exercise bike, I’ve worked my way through a few movies. Watching something keeps me there for the allotted time more than listening to something, even an engaging audiobook.

To Catch a Thief was an old Hitchcock film with Cary Grant and Grace Kelly. A burglar known as “The Cat,” played by Grant, had served his time and changed his ways. But now someone else has committed a string of burglaries using his MO, and he sets out to catch his imitator.

Funny Face was another old one with Audrey Hepburn and Fred Astaire. He’s a photographer for a high-profile women’s magazine who “discovers” her in a book shop and thinks she’s the face for the magazine’s new campaign. The only reason she agrees is to be able to go to Paris. It started out a little weird, but ended up being sweet and cute.

Beyond the Mask is a Christian film set during the Revolutionary War. The main mercenary for the East India Company wants to quit and is betrayed. He ends up working against the EIC . . . and falling in love with his rescuer and meeting Benjamin Franklin. I don’t think I have ever seen a Christian film with such extensive costuming and setting. I enjoyed it. And the two main characters are married in real life.

Waiting for Anya was just released this year. A young shepherd boy in France who is not very responsible at first ends up helping a stranger smuggle Jewish children into Spain during WWII. It was pretty good! I’d like to look up the book it’s based on.

I think I watched all these on Amazon Prime, but they may be available elsewhere as well.

This month I finished (titles link back to my reviews):

I plowed through a lot of Christian fiction on the Kindle app in the evenings.

Some of my posts this month, besides the weekly Friday’s Fave Fives and occasional Laudable Linkages:

I got some good sessions in on my book-in-progress. I was especially thankful for a long work session where I got the basic information down for what I think is my most difficult chapter to put together.

And that wraps up July! We have some things to look forward to in August while we hope and pray for deliverance from the coronavirus.

I hope you’re keeping cool and well this summer! How was your July?