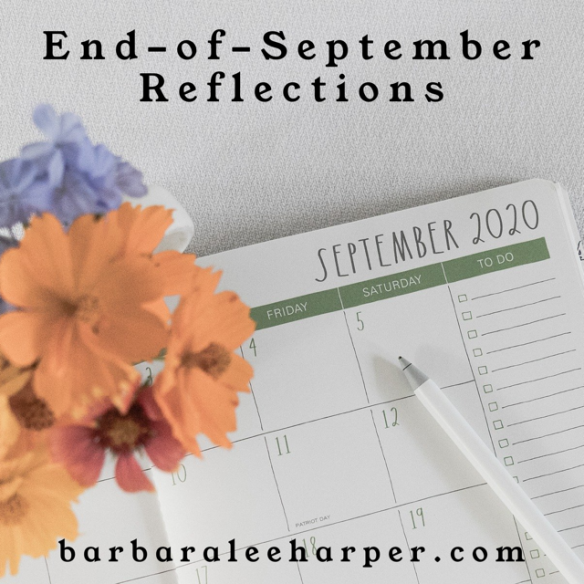 So ends another month in this crazy year. In addition to COVID and everything else going on in the world, a black bear and a tiger were roaming loose in our city this month! I never heard if someone caught them—I think they just moved on. Bears aren’t uncommon, but they’re usually in woodsy areas. But no one knew where the tiger came from.

We’re very much enjoying the cooler temperatures and crisp air. Leaves are starting to change, but full-blown color is still a couple of weeks away.

My youngest son is seriously looking at apartments now, aiming to move out before the end of the year. I’m excited for him, but I’ll miss the everyday interaction. I’m thankful he’ll still be in town.

We grilled burgers and enjoyed a long weekend for Labor Day, and my son’s family made us feel special for Grandparent’s Day. Besides my youngest son’s birthday and my brief hospital stay for afib, I can’t recall that we did anything else unusual as a family this month. We always enjoy visiting back and forth every week, but I don’t think we had any excursions. But that’s fine. August was busy, so a fairly quiet September was nice.

When I showed Timothy the Bundt cake I had made for Jesse’s birthday, he said it looked like a donut cake. Makes sense to me!

One evening Timothy was playing with Little People and had two of them going on a date. Part of their conversation was, “So what do you think about having babies? What kind of house do you want to live in?” Seems to be moving a little fast—but it’s important to talk about those things. 😀

This card was or a former pastor who turned 91. 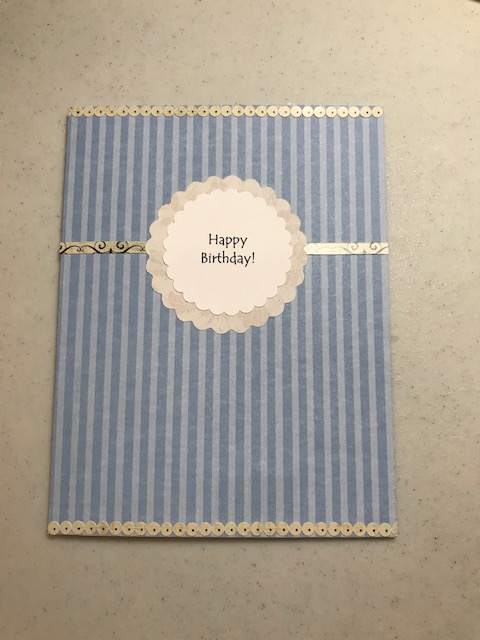 The horizontal pieces are stickers. I made the scalloped circles with punches.

This was for Jesse’s birthday. Video games are his main thing, and I looked for some kind of video game clip art. When I found this controller, I decided just to make the card on the computer rather than printing and cutting out the pieces.

I had found a shirt for him that said, “I paused my game to be here.” So I tied the card in with that theme.

While riding my exercise bike, I worked through:

The Adventures of Ociee Nash, a cute family film about a tomboyish little girl growing up with brothers and a father, sent to stay with an aunt to learn “lady ways,” meeting famous people along the way.

God’s Not Dead. A college freshman tangles with an atheistic professor. Somehow I missed this when it was going around a few years ago There are two sequels to it out now that I have not seen. I thought the story was pretty good except they overdid the villainy of the two bad guys. Plus there were a couple of theological oddities. A pastor told one girl struggling with self image and wrong relationships, “Jesus would willingly be crucified again just for you if that’s what it took.” Um, no: His once-for-all death was sufficient.

Enchantment was an old film with David Niven as an elderly retired soldier who just wants to live out his days in the family home. But a niece in the Army pops in while in town. The old soldier sees she and the young man interested in her are about to make a mistake and miss their chance, and his sad story of lost love compels him to encourage them toward each other.

The Bishop’s Wife, another old one with David Niven as a distracted bishop and Cary Grant as an angel. Somehow I had never seen this. I didn’t realize it was set at Christmas or I might have saved it for then. It was “off” in the angelology department, but otherwise pretty sweet.

Before All Others was a Christian-ish film (once you watch an old film or a Christian film on Amazon Prime, they start adding more into the “suggested” list). I just finished it yesterday and am still processing it. In it, a young woman develops a serious illness. Her only living relative is an estranged grandmother, so she stays with her. They get to know each other while working through some difficulties. The grandmother hires a man from church to build a wheelchair ramp, and he and the granddaughter are attracted. But he’s working through some issues of his own. The grandmother is a believer but the two young people are not. The grandmother tends to go to the shed to talk to her dead husband…and when he tells her it’s almost her time to go, she says, “You’ll just have to tell—whoever—that I’m not ready to go.” The last few scenes were disjointed with the viewer having to fill in a lot of gaps. It was ok: it could have been really good, but just fell short.

One evening Jim and I watched Same Kind of Different As Me. I had read the book years ago and wanted to see the film, but just never got to it before. For some reason, it was on my heart. We both enjoyed the true story of a couple with a troubled marriage working in a soup kitchen and befriending one of the homeless men.

I finished some good books this month:

In all honesty, I haven’t picked up the last two in a number of weeks and need to get back at them. I’m also starting an advanced reader copy of a book coming out in November.

I was pleased and Thankful that a devotion I wrote for the Christian Devotions site was accepted and published last Saturday. It’s titled “Unsteady.”

I’ve gotten a little work done on the book. I am looking and praying for longer stretches of time to work on it. I can add in little tidbits in smaller swaths of time. But I need to overhaul at least a couple of chapters, and that requires a longer time period to really dig in and concentrate.

And that wraps up September! I’m looking forward to more color and coolness in October.

How was your September?

(Sharing with Worth Beyond Rubies, Grace and Truth, Hearth and Soul,
Senior Salon, InstaEncouragement, Shannan’s What I’m Into.
Linking does not imply 100% endorsement)