Happy Independence Day! I’ve always loved this quote from John Adams’ letter of July 3, 1776, in which he wrote to his wife Abigail what his thoughts were about celebrating Independence Day, with his original spellings:

The Second Day of July 1776, will be the most memorable Epocha, in the History of America. I am apt to believe that it will be celebrated, by succeeding Generations, as the great anniversary Festival. It ought to be commemorated, as the Day of Deliverance by solemn Acts of Devotion to God Almighty. It ought to be solemnized with Pomp and Parade, with Shews, Games, Sports, Guns, Bells, Bonfires and Illuminations from one End of this Continent to the other from this Time forward forever more.

You will think me transported with Enthusiasm but I am not. I am well aware of the Toil and Blood and Treasure, that it will cost Us to maintain this Declaration, and support and defend these States. Yet through all the Gloom I can see the Rays of ravishing Light and Glory. I can see that the End is more than worth all the Means. And that Posterity will tryumph in that Days Transaction, even altho We should rue it, which I trust in God We shall not.

No guns or pomp or illumination here today — Jim is grilling hamburgers later on and we’ll have Grandma over and maybe get into a rousing game of Scrabble. 🙂 Often we’ll flip back and forth through whatever TV channels have a patriotic concert going on. I hate that we can’t have fireworks in our city limits–we used to get a few specialty ones like little tanks that shot off sparks while it rolled down the street and such. In past years we’ve made it out to some of the bigger displays in the areas, but somehow we didn’t this year. I don’t really like the heavy traffic, but I do enjoy the fireworks. We did go to an Army band concert last night in a downtown park. 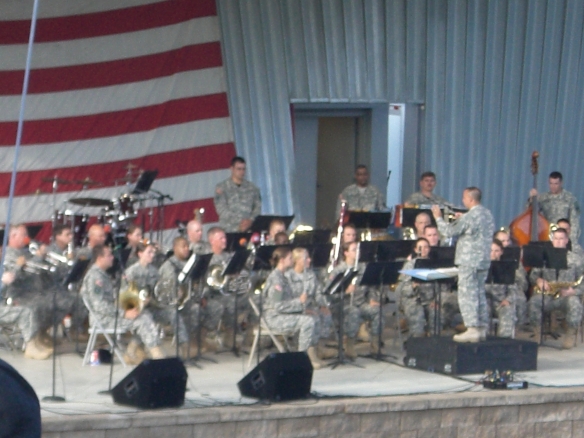 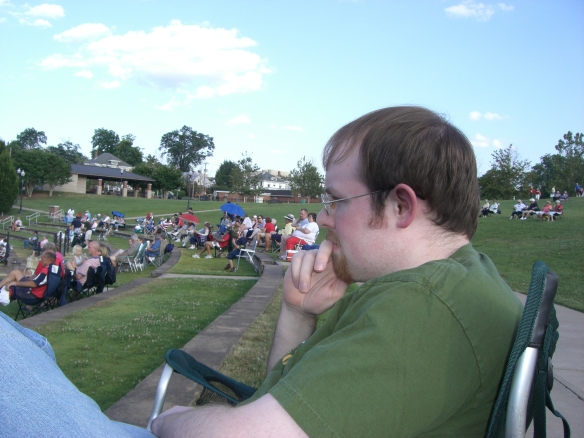 I chuckled at how they described their concerts as “missions.” I guess in the military everything is a mission. It was a great night for it — clear and not too hot. There was a nice breeze after the sun started going down. We got a kick out of watching one older man with a walker really getting into the music — standing up much of the time, clapping or moving his hands in time to the music. It was the first time we had been to an event at this park, and we enjoyed it.

It’s been a whirlwind week. I had the ladies’ ministry newsletter/booklet due this week, and Jesse headed for camp on Monday for the week and Jim was out of town the first part of the week, so I thought it would be a great time of quiet to dig into it. But somehow Monday and Tuesday ended up being consumed with errands and other tasks. I was praying the Lord would give me a really good day working on it Wednesday, and He did. It’s really neat how I was writing something that had been on my mind for several weeks, and then this week in my reading from a devotional book and Bible study book, there were sections on the very topic I was writing about that contributed to my thinking and rounded out that section (thank you, Lord!). Thursday was pretty much taken up with Grandma’s birthday, and then the Lord gave me another good day to finish it up Friday. I was really hoping that would be the case and I wouldn’t have to work on it today — I wanted to be able to do family stuff today.

I didn’t get to the computer last night to “play” until evening yesterday, so I figured it was probably too late for the Friday Fave Five. I caught up with some of your blogs then, but it will probably take me a day or two to catch up with everyone.

There’s more “news” but this post is way long already, so I’ll leave you with a few scenes from Grandma’s birthday. 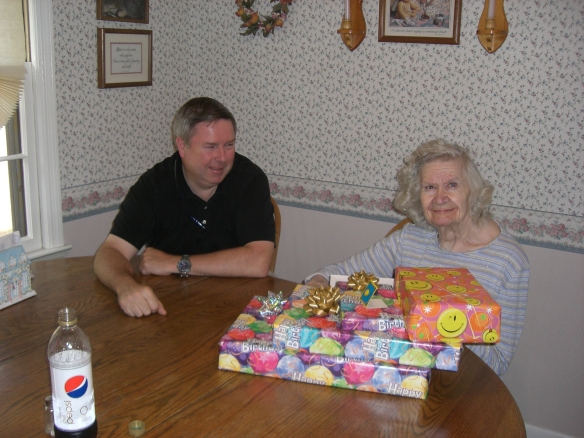 Jesse was at camp and Jason was working during this and the band concert, but Jesse got home today and Jason gets off early tonight, so we’ll all be here for dinner. 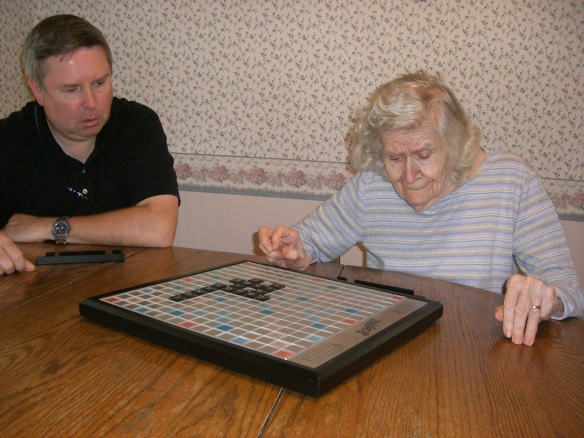 Concentrating hard on the Scrabble board. We have to tone it down a bit because she fusses with us over words that don’t make sense to her, like xi and xu. But sometimes when you can play a high-point letter in a way that makes two words at one time using a double or triple space, it’s just too good to pass up. 😀

12 thoughts on “Happy 4th and catching up”