Mocha With Linda hosts a weekly meme called Flashback Friday. She’ll post a question every Thursday, and then Friday we can link our answers up on her site. You can visit her site for more Flashbacks.

The prompt for this week is:

Yesterday was Veteran’s Day, so this is a good opportunity to reflect on the veterans we knew and loved in our early years. Were/Are either of your parents or other family members active military personnel or veterans? What branch? When did they serve; was it during wartime or peacetime? Did they share much about their experiences with you or others? When you were growing up, was the USA (or your country, for those outside the US) involved in a war? What do you remember about it and how did it impact you? Are you, your spouse, or any of your children veterans?

My father was in the Air Force, and I do remember he lied about his age to get in. He served during the Korean conflict and spent some time in Okinawa, but other than that he never said much about his military service. I did write a few years ago (to the Veteran’s Administration, I think) to request a copy of his military record, but since our move I am not sure exactly where it is. One of the very few mementos I have from him is a medal for sharp-shooting:

His younger brother, my uncle, was on active duty during the Viet Nam war, so that war was brought a little closer to home. That uncle was the one who had three daughters close to my age, and one time he sent all of us a Viet Namese doll. It’s one of those things I wish I still had. One other specific memory of that time is that my parents used to make tapes (reel to reel, I think) to send to him, then he’d record a message and send them back. I know they must have done so to hear each other’s voices —  though maybe it was just because neither brother was a writer — and I imagine phone service directly where he was might have been hard to come by. One time they had a whole group of people on hand to make a recording — I don’t remember if it was a family gathering or a group of friends — but it kind of backfired, because instead making him feel a part of the gathering, it made him feel more isolated and lonely. He did go on to become a career serviceman. I know other uncles and grandfathers must have also served, but I don’t know anything about the particulars.

My husband’s father was in the Navy — he also lied about his age and joined to escape a pretty bad home environment. He fought during part of WWII, and I remember him saying he was part of the battle at Midway, but other than that I don’t remember much about his service. He also did not talk much about it.

This is my husband’s parents in their early years together:

This is from my father-in-law’s funeral: 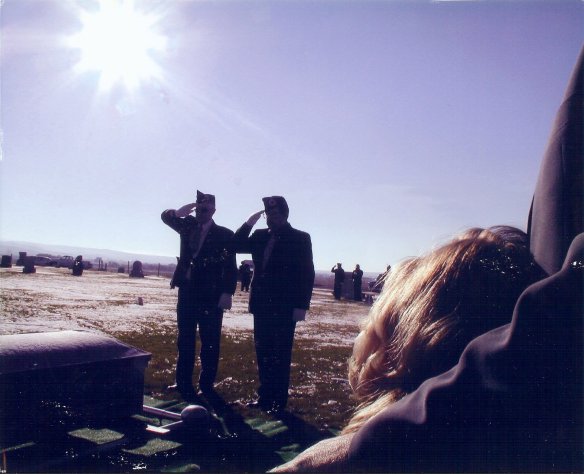 I have always liked that picture of two old veterans paying their respects.

This is on my mother-in-law’s wall: 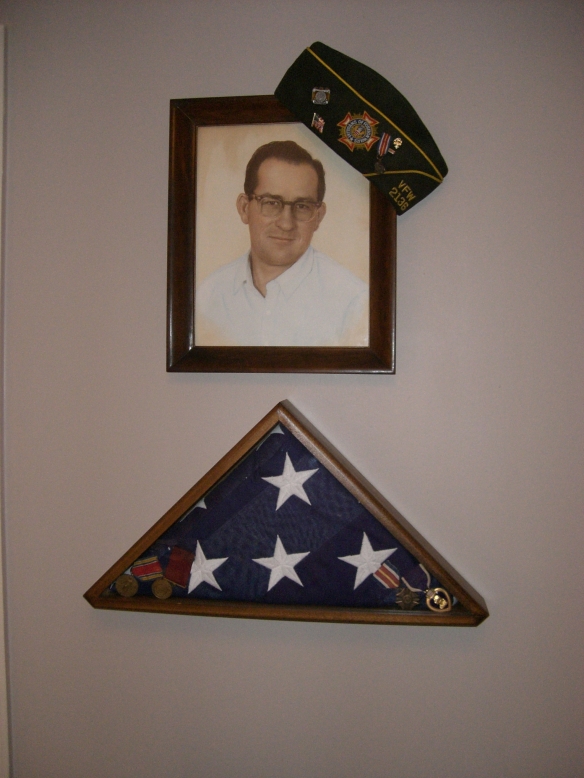 When my father passed away, he also received a military funeral with a 21-gun salute, and I have to say I so respect and appreciate those men who serve in that capacity to send off their brother-in-arms with repect and honor even when they did not know him personally.

My step-father was in the Navy and I know he traveled a lot, but I can only remember his being in Japan. I do not remember for sure, but I don’t think he saw any combat. I think he was between the Viet Nam era and the Desert Storm era. He did benefit greatly from VA benefits in taking courses after he got out of the Navy and became a diesel mechanic, which stood him in good stead all these years.

My husband’s oldest brother was in the Navy (when the slogan was “Join the Navy, See the World” — but he remained posted in the States during his service), but neither my husband nor my sons nor my brother were in military service. I’ve been very glad, especially as my sons approached the age where they would have been able to enlist. that they didn’t have to. Though I admire the military greatly and am so thankful for all they do, and we would support any of our family member’s who wanted to join, it would be hard to willingly send a family member into harm’s way. I have just fleetingly wondered, though, if they miss something by not serving in that way — something of camaraderie, service, sacrifice — that only the military can provide. I hope not — I trust God will develop whatever character qualities He wants in them in whatever way He sees fit.