I won two books in the Sand Dollar series, A Walk In the Park and A Long Walk Home by Barbara Andrews, in a contest held by Mocha With Linda, who knows the author. Either could probably be read as a stand-alone book, but their enjoyment would be enhanced by reading them both.

In A Walk In the Park, Barbara Andrews tells a very sweet and tender story of Mac Richmond, who became a troubled young child acting out his grief over the death of his parents until he found an outlet for his emotion in sculpting. He grew up to become a brilliant, well-known sculptor of female figures, and though he talked easily to “his girls,” as he called them, he was too shy to talk to women in real life…until he met Maddie.

A Long Walk Home tells the back story of Berdine, Mac’s 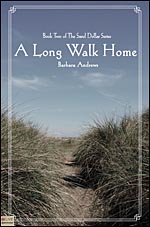 housekeeper from the previous book, and then ties the two stories together at the end. Though small of stature, Berdie  had “the heart of a lion,” fiercely protective of others whom she loved and ready to defend them. Her childhood friendship with Michael became complicated as they grew older, and Berdine’s parents did not want her to see him. Berdine came upon a fight between Michael and the school bully, and jumped in to defend him, not realizing she was embarrassing him. When he left town the next day without a word to her, she grieved, fearing she had ruined her friendship with him. She withdrew from her family due to their lack of understanding and threw herself into her studies. Just after her senior year, she accidentally runs into Michael at Parris Island, where he is in basic training as a Marine recruit, and is stunned by his coldness to her…until they get a chance to talk and learn of the changes the years have made for each of them. Is there any hope of renewing their friendship, or of something more? And what about Michael’s new-found faith and Berdie’s disinterest in it?

Barbara knows how to weave a tale and pull the heartstrings. Both books were very realistic, the characters were well-developed, and the plots pulled me in emotionally. You might need to keep a box of tissues nearby.

My only quibble was the amount of physicality between Michael and Berdie in the second book. I know I am more conservative than many in this area, so I know not to expect most books to follow my convictions of how much physical contact an unmarried couple should engage in, yet I know some of you feel the same way, so I feel I should mention it. There were no sexual scenes at all, but Michael is trying to keep the physical aspect of their relationship under control, yet in one scene he spins Berdine around and stops to “slowly let her body slide down his until her feet met the sand” (p. 215), I want to tap him on the shoulder and say, “Um, fella, that’s not the way to avoid temptation!” That’s probably the worst incidence, and if it were not for that I would give the book 5 stars.

5 thoughts on “Book Reviews: A Walk in the Park and A Long Walk Home”