I discovered this book on my shelves while looking for another Narnia-related book. I don’t remember where and when I bought it or whether I ever read it to the children (I’ll have to ask them if they remember it). I didn’t remember it at all until after I read it through again.

Even though the Amazon listing calls this book a graphic novel, the book itself doesn’t have that designation anywhere on it. Perhaps they added that onto it later to make it current and trendy? I don’t know.

It is bound like a book but the illustrations, though not what I would call comic-bookish themselves, are laid out in something of a comic book or graphic novel style. I tried to get a few examples: Please forgive my fingertips in the pictures trying to hold the book open. 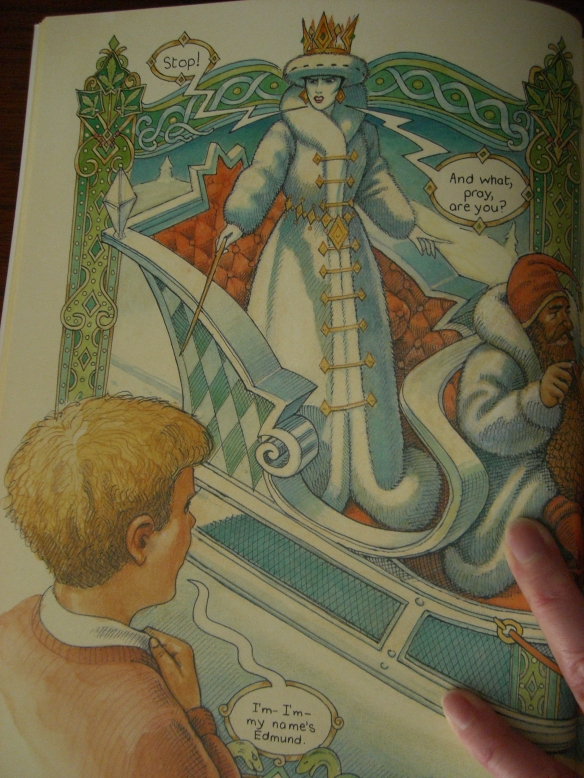 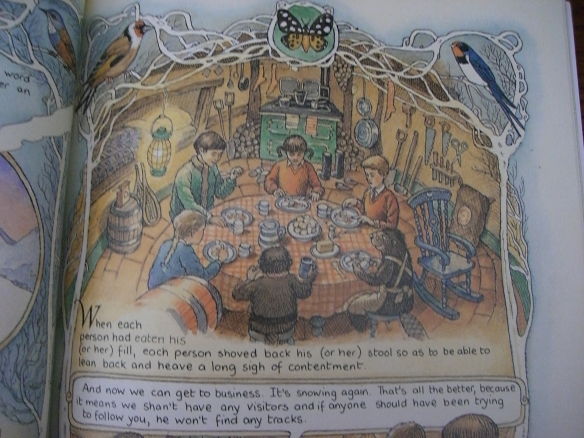 The book is abridged and illustrated by Robin Lawrie and was published in 1993. It appears to be out of print though I did find used copies on the Amazon and B&N sites.

I thought the illustrations themselves were lovely and far above what we think of as a comic book style. And I appreciated that many passages were straight from the books though of course many parts were summarized and several scenes left out at the book is only 64 pages.

To many of us the thought that our beloved classic fairy tale has been reduced to a graphic novel  invokes an initial reaction of horror. But we wouldn’t have the same reaction if it were called an abridged illustrated children’s version, which it could be called in one sense. Graphic novels seem to have a connotation of luridness about them though I don’t know if they truly are: my boys read a few when they were younger but were never obsessed by them, and the ones we read were fine though one shop that sold them was creepy. Too, I have no objection to good books being translated into this style for those who do read them. If there are people who only read graphic novels, why not give them a good choice of material?

Though I’d rather read to my children or have them read the full book version for all its richness, if I had one who didn’t particularly enjoy reading or was into graphic novels, I wouldn’t hesitate to let them read this version.

I do wrestle with whether I would use something like this to introduce the books. (My boys are older now so it is a moot question until grandkids come along except for philosophizing). I think I’d still rather have them read the books first and then show them something like this afterward, but I can picture letting a small child look through this while the rest of the family read the books out loud. Knowing the story, I enjoyed looking through this summary and the illustrations.

9 thoughts on “The Lion, the Witch, and the Wardrobe Graphic Novel”