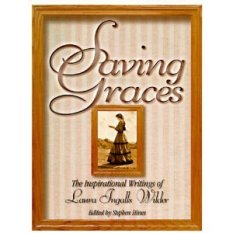 I got Saving Graces: the Inspirational Writings of Laura Ingalls Wilder, edited by Stephen Hines, some years back because I was interested in this aspect of her life. I began it for the Laura Ingalls Wilder Reading Challenge, but didn’t get it finished til a few days ago. Well….in one sense I didn’t, but in another sense I had already read it, because these were taken from Laura’s magazine columns collected in a previous book of Mr. Hines’, Little House in the Ozarks: the Rediscovered Writings of Laura Ingalls Wilder. In addition he added Scripture verses pertaining to the topics she wrote about and hymns that she would likely have been familiar with. So that was a bit disappointing, that it was a reprint in effect, and I only skimmed the columns I remembered fairly well but then reread others.

This title originally caught my attention because on a previous reading of the Little House series, I began to wonder if the Ingalls family was what we call God-fearing, but maybe not necessarily what we would understand as born again. Part of that wondering came from their reaction to an evangelist who came through town when Laura was in her teens. I can’t remember much about the scenario, and I didn’t get to that book in my most recent reading, but it seems the family was somewhat wary and not fully supportive of the evangelist. But in the intervening years since I read that, we’ve had encounters with evangelists that I would be wary and unsupportive of, too, so that’s not necessarily an indication of one’s faith. That is one section I am really looking forward to reading again in the future.

I did notice in the first two books in the series I just read for the LIW challenge, Little House in the Big Woods and Little House in the Prairie, there was mention of God, of keeping the Sabbath, of Scriptural principles for daily life. They didn’t go to church in those books, but then, there was not one on the prairie and probably not in the Big Woods, either. Laura’s parents were founders of a Congregational Church in later years. I wasn’t familiar with that denomination, but a brief skimming of the Wikipedia entry for them seems to indicate that they started out very similar to reformed, nonconformist churches but then over the years veered into “Unitarianism, Deism, and transcendentalism.” So I am not sure where the denomination as a whole was in Laura’s time and what she or her parents particularly believed.

In those first two books as well, I don’t remember much mention of prayer, any mention of Jesus in particular or salvation in general. Again, that doesn’t mean they didn’t believe in those things. We have to be careful that we don’t take anyone’s passing mention of God as an evidence of salvation on one hand, but on the other, we have to be careful that we don’t dismiss someone’s testimony because we don’t hear certain “code words.” By that estimation some would discount the salvation of the thief on the cross beside Jesus because his statement of faith didn’t sound like what we read in the “sinner’s prayer” on the back of tracts. 🙂

So, I am not trying to pick apart or dissect their faith but I am trying to look at it objectively. In Wendy McClure’s The Wilder Life, she ran into a number of Christians who loved Laura, and she felt perhaps they were reading their faith into the books. She says:

I know there are a lot of folks who can easily see Christian messages in the books, lessons about trusting and accepting the will of God in times of hardship and relying on the bedrock of one’s faith to get through. There’s plenty of stuff in the books that can help illustrate these things, I guess. But the Ingalls family of the books didn’t appear to be much the praying types, unless the occasional hymn on Pa’s fiddle counts. Mary becomes a little godly by the later books, but as for the rest of the family, their reasons for attending church seems to have more to do with partaking in civilized town life than with religious devotion (The Wilder Life, p. 163).

She goes on to say that she may see it that way because that was how her own family attended church. Since she looks at everything through decidedly secular eyes, and Christians look at the series through the eyes of their own faith, it’s hard to know which of us is reading things into the books.

That brings me back full circle to Saving Graces. Laura’s own words didn’t shed much more light on the issue. She did believe in Scriptural principles and in a “beneficent Providence.” I didn’t get the idea that church was just a social outlet for her. Hines describes her conversion experience as a time when she was deeply burdened for a situation her family was in and knelt to pray and she was “filled with an overwhelming feeling, undoubtedly the presence of the Almighty, and she thought to herself, This is what men call God” (p. 2). Again, I wouldn’t necessarily argue with that, though conversion is more than just a feeling. But Hines says later that public expressions of faith “may have shocked her.” He quotes her as saying, “Of course you loved God, but you also loved your mother, and somehow it didn’t seem right to go around bragging about it” (p. 3). It doesn’t make sense to me that a public expression of faith would be considered bragging, but evidently she considered faith to be intensely personal.

On the other hand, she writes in one of her columns, “Here and there one sees a criticism of Christianity because of the things that have happened [during WWI]….’Christianity has not prevented these things, therefore it is a failure’ some say. But this is a calling of things by the wrong names. It is rather the lack of Christianity that has brought us where we are. Not a lack of churches or religious forms but of the real thing in our hearts” (p. 113).

In these columns she covers success, justice, thankfulness, the benefits of work, the importance and blessing of the home, wise stewardship, remembering the Sabbath, friendship, gossip, “redeeming the time, “the preaching farmer,” and others. One of the quotes I marked had to do with taking the Lord’s name in vain: “I wonder how things came to be so reversed from the right order that it should be thought daring and smart to swear instead of being regarded as utterly foolish and a sign of weakness, betraying a lack of self control. If people could only realize how ridiculous they appear when they call down the wrath of the Creator and Ruler of the universe just because they have jammed their thumbs, I feel sure they would never feel guilty of swearing again” (p. 124). I don’t know if they would, but I agree that it is a sign of weakness and a lack of self-control.

So, even though I was disappointed that this book was taken from the Little House in the Ozarks book, it was nice to have her faith-based columns all in one place for those of us who want to explore her thoughts in this realm in particular.