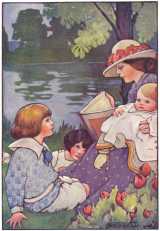 Carrie had someone ask this question in her comments, and she answered yesterday. My response grew into several paragraphs, so I figured it would be better to form them into my own blog post rather than posting a full-fledged post in her comments.

Since I am in my mid-fifties, my childhood was a long time ago. I don’t remember whether my mom read to me, though I assume she did. I LOVED reading in school. The first book I remember reading from is A Child’s Garden of Verses by Robert Louis Stevenson. I must have read several Little Golden Books, because they were familiar to me when I started reading them to my kids. I remember checking out a biography of Martin Luther from the school library in maybe the second grade. My dad did not read much at that time (though he did after he retired), and he thought I was being lazy if I was sitting around reading much. I remember being admonished about that a number of times, so I must have been reading a lot, but it doesn’t seem to have dimmed my enthusiasm. Since I was the oldest of six kids, whatever children’s books we had did not survive the long run through everyone’s use.

I never heard of Anne of Green Gables until I was a young adult (when the Megan Follows films came out) or Narnia until less than 15 years ago. When someone in our church talked about acting in a local production of The Lion, the Witch, and the Wardrobe, I was suspect. 🙂 I think it was probably then that I checked the series out and loved it. I think it’s been in that time frame that I discovered The Hobbit and LOTR, too.

Somehow I even missed Nancy Drew and The Babysitters Club! I do remember reading Little Women  and its sequels many times, and I must have read some of the Little House books, because they were familiar to me later. Then in high school I discovered and loved Dickens with David Copperfield. Somewhere along the way I read Great Expectations and Oliver Twist and didn’t like those quite so well, and attempted A Tale of Two Cities several times over the years before finally getting through it and then instantly rereading it and deeming it my favorite novel. I remember some book from the Scholastic book paper about a girl getting pregnant (and my dad was very angry I was reading that) and one called The Endless Steppe about a girl in Russia

I remember studying a different Shakespeare play each year in high school but not getting much out of it. My sophomore English class was memorable because we made a film, but I don’t remember what we read. That was the early 70s, just coming off the hippie era, and my teacher that year “fit” into that era well.

It was in college that I first discovered missionary biographies, and that was nurtured by the church I attended for the first 14 yeas we were married which had in the monthly ladies’ meetings a librarian who talked briefly each meeting about a book and had them there to check out.

Early married years were when I first discovered Christian fiction with Janette Oke. In high school I had read Not My Will by Francena Arnold, which was kind of a precursor of modern Christian fiction, and it spoke to my heart.

I know we explored good literature in three of my college literature classics, but all I can remember is discovering and loving Anne Bradstreet and then Jane Austen’s Emma. A lady professor who attended my church taught a class on Shakespeare that I really wanted to take, but just couldn’t work it in.

Since I’ve started a blog I’ve purposed to read through some of the classics. I’ve read all of Austen’s books, Les Miserables, The Count of Monte Cristo, and many others. I’m enjoying discovering them as an adult, though I am sorry I missed being exposed to them at a younger age. I also enjoy rereading some of the ones I had read earlier, like Little Women and the Little House books and Dickens. I’ve had fun exploring children’s classics that I missed along the way, like all of the Anne books, Narnia, Caddie Woodlawn, Five Little Peppers and How They Grew (a favorite, though I need to reread it again). And I continue on with biographies, “real-life” stories, Christian fiction and non-fiction, and an occasional secular fiction or non-fiction.

Some favorites I read to my own kids when they were small were the Francis books, Curious George, Clifford, the Little Bear series by Else Holmelund Minark, the Jesse Bear series by Nancy White Carlstrom, Mike Mulligan, The Little Engine That Could, Robert McCloskey books (Make Way for Ducklings and Blueberries for Sal), Dr. Seuss, P. D. Eastman, Keep the Lights Burning, Abbie by Peter Roop one of my all-time favorites, about a girl who has to keep the lighthouse lamps burning when her father is delayed from getting back home due to a storm), The Puppy Who Wanted a Boy by Jane Thayer, the Snipp, Snapp, and Snurr books by Maj Lindman, and of course the Little Golden Books. One of their favorites was Gus the Bus, who goes frolicking off his usual route when his tires get overfilled. We kept that even though it is taped together.

So…what did you read when you were a kid?