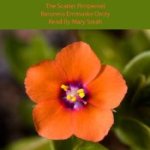 The Scarlet Pimpernel by Baroness Orczy is the forerunner of the heroes with a secret identity genre, at least according to Wikipedia. It was originally published as a play in 1903, then as a novel in 1905.

A scarlet pimpernel is a small red flower in England, and it’s also adopted as the name and sign of an English man who dons different disguises to help rescue those slated for the guillotine in France during the Reign of Terror of the French Revolution in 1792. He is rumored to have 19 men under his command, and his exploits have made him the talk of England, with everyone wondering about his true identity.

Citizen Chauvelin is an agent who has come from France specifically to find out the identity of the Scarlet Pimpernel and to stop him. He calls on an old friend, Lady Marguerite Blakeney, a Frenchwoman married to the very rich but very foppish English Sir Percy Blakeney. Chauvelin is convinced that in the circles in which Marguerite moves, she is sure to hear something that might be helpful to him. To ensure her cooperation, he threatens the safety of her brother with papers that show that he is in league with the Scarlet Pimpernel and therefore in danger of his life.

Marguerite wrestles with her conscience: she is as enamored of the Scarlet Pimpernel as everyone else and does not want to be the downfall of a brave man. Though she is French, she feels her countrymen have gone way too far in the Revolution. On the other hand, her she loves her brother dearly, and he is her only remaining family member.

She considers turning to her husband for help, but they have been estranged since the first days of their marriage, although they put up a good front for everyone else. Marguerite had once spoken out against the Marquis de St. Cyr, unwittingly causing him to be arrested and sent to the guillotine. Her husband can’t forgive her for that and doesn’t trust her. Besides, he’s slow, lazy, and dimwitted, so she doesn’t feel she can confide in him.

I’ll leave the plot there so as not to spoil it. I wouldn’t say Baroness Orczy is the best writer – there are places in the book that are tedious, other places a bit overwrought – but this is certainly an exciting book, with intrigue, suspense, danger, and everything we love about heroes in disguise.

I first came across this story years ago as a film starring Jane Seymour and Anthony Andrews (and a young Ian McKellen [Gandalf] as Chauvelin), which I loved. There is a good bit more swashbuckling and derring-do in the film than in the book, and the film shows the audience who the Scarlet Pimpernel is right off the bat, whereas the book slowly unfolds it. The film is based not only on the book The Scarlet Pimpernel but also Eldorado (which I haven’t read), which includes more about Marguerite’s brother and the rescue of the captive Dauphin. Many of the details are changed or in a different order, but they did keep the overall story arc the same, and they especially captured the angst of Marguerite and Percy’s love for each other that they each keep hidden at first because of their misunderstandings.

For those who would want to know, there is smattering of “damns” and “dems” and “demmed.” There are also what I did not recognize as minced oaths, but when I looked them up I saw that they were. I wish those weren’t there.

But otherwise this is a fun story.

I listened to the audiobook read by a Mary Sarah, who was not the best narrator, but the book was still enjoyable.

This also completes one of my requirements for the  Back to the Classics Challenge hosted by Karen at Books and Chocolate.