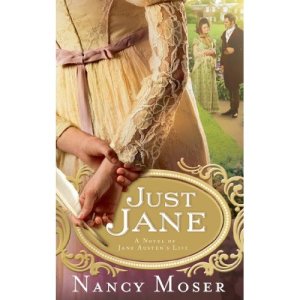 Just Jane: A Novel of Jane Austen’s Life by Nancy Moser caught my eye when it came through as free or inexpensive for the Kindle app because I so enjoyed How Do I Love Thee?, her novelization of Elizabeth Barrett Browning’s life.

The novel is written from Jane’s point of view beginning when she is in her early twenties. She’s the seventh of eight children, the youngest of two girls. She enjoys writing and her family enjoys hearing her stories, but there doesn’t seem to be much thought of publishing yet. She has had some encounters with a Tom Lefroy to the point where she believes they have an understanding. While he is away at law school she cherishes hopes of their coming union. But, if you know her life story, you know she never hears from Tom and he marries someone else.

She continues at home doing all the things a single woman in the 1800s would do, with the addition of writing, until her family moves to Bath. She not only doesn’t want to go, but she is furious that the decision was made without even consulting her. She has lived in the rural village of Steventon all her life and hates Bath. She has no choice but to move with her family, but she does not write during the years they live there.

Though she has another romantic encounter or two, she never marries. When her family moves again to more commodious accommodations, she is inspired to pick up her pen again. Her first novel is rejected, which may be an additional reason she stops writing for a while, but eventually, as the world knows, she is finally published. She writes anonymously at first but eventually her secret comes out.

The book ends some years before her death, but the author provides a postscript with details of her remaining years. I much appreciated a section at the back where Moser tells what is fact and fiction in the book. Unfortunately, many of Jane’s letters were destroyed, and though Moser drew from them and even seamlessly wove some into the story, she had to fill in the best she could with what she knew.

I thought I would really like this book since I liked the earlier book of Moser’s and since I generally enjoy Austen’s books. I didn’t dislike it per se, I just didn’t love it as much as I thought I would. Sometimes when you approach a book with high expectations it makes it especially hard for it to live up to them. I felt there was too much information about her family: by the time she’s in her mid-twenties, most of her brothers have either already married or are getting married, and the drama of their relationships wasn’t really what I was reading the book for. Then again, I’m sure she and her parents and sister would have been involved and interested, so it was definitely a part of her life and I can understand its inclusion. I missed her humor: some of her writing has been described as “biting satire” (some of the “bite” goes a little too far for me sometimes),  but some of it has a lighter touch. I just finished listening to Northhanger Abbey and loved some of the humorous interchanges with Henry especially (also the name of her favorite brother) and the way she subtly gets across to the reader some of the things naive Catherine Morland misses in her first foray away from home. I also thought she came across as somewhat negative (downright grouchy sometimes), but near the end she did say that she wrestled with discontentment and was guilty of “the unforgivable act of complaining. For what good comes from that particular vice – for the complainer or her unlucky listener?” Moser says in her afterword that Jane was “witty, wise, discerning, creative, loyal. She was also stubborn, judgmental, insecure, and needy. She was…a lot like us.” She did learn along the way that she could “wallow in unhappiness or make a determined choice to leave it behind and move forward. Life is not fair – nor often understandable. But it is ours to live to the best of our ability.”

I did empathize with what seemed to be an inclination towards introversion: though she loved visiting family and having them visit, there were times she declined certain activities because she just needed some time alone. She “embraces silence and solitude.” Though she attended balls in her younger years, she seemed to be more of a homebody later on.

So…upon reflection I guess I did appreciate more from it than I thought. 🙂 That’s one thing reviews are good for – going back over the story and trying to put it all into perspective. I did enjoy her more at the end of the book than at the beginning or middle and appreciated what she learned about contentment and life and finding one’s place.

And I loved the cover!

One last note that I especially liked: when one reviewer seems to portray Jane’s work as “educational,” she says, “I didn’t mean for it to be educational…at least not with any conscious intent.” Her sister Cassandra replies, “Your stories portray true life. In that there is always education.” Amen to that. I think that’s what resonates with us in the books that most appeal to us, no matter the setting: when they depict something of real life and touch our hearts with truth.

Linking to the Austen in August challenge: