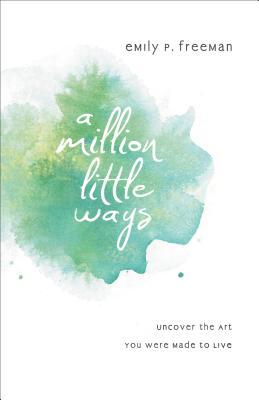 When you disagree with a foundational statement eighteen pages into a book, it’s hard not to let that color the rest of your reading. But I tried to give it my best effort. More on that in a moment.

I got A Million Little Ways: Uncover the Art You Were Made to Live by Emily Freeman because I enjoyed her Grace For the Good Girl so much. The title sounds like it might be about finding ways to be more creative or finding time to express yourself artistically. However, though that is involved, that’s not exactly what the book is about, at least not in the way you might be thinking at first glance. The basis of the book is taken from Ephesians 2:10: “For we are his workmanship, created in Christ Jesus unto good works, which God hath before ordained that we should walk in them.” Other versions use “handiwork” or “masterpiece” in place of “workmanship,” and the Greek word they are translated from is poiema, from which we get our English word poem.

Being his workmanship doesn’t mean we are all poets. It means we are all poems, individual created works of a creative God. And this poetry comes out uniquely through us as we worship, think, love, pray, rest, work, and exist.

Jesus reminds us we are art and empowers us to make art.

There isn’t one right way to do the job of glorifying God. There are many ways, a million little ways, that Christ is formed in us and spills out of us into the world.

Knowing you are a poem doesn’t confine you to be artsy, it releases you to be you (p. 29).

So the art she is talking about our creating isn’t writing or painting or sculpture – unless we’re called to that – but rather finding the purpose for which God made us, that which makes us most “fully alive” (a phrase she uses often), and then doing that by the enabling of God and for His glory, whether it is being a doctor, a mom, a janitor, a hostess, or whatever. But she is not talking primarily about our occupation, though that’s a big part of it:

So we can express God’s glory whether we’re listening to a friend’s troubles, making dinner for our family, playing an instrument, or whatever else is a part of our day.

Part of uncovering what we are uniquely called to do is examining our desires. “Our passions aren’t the goal, but they are the signposts, like arrows pointing to our center” (p. 60).

Could it also be possible that somewhere along the way you got the message that to follow desire would be selfish, when, really, it would be the opposite? (p. 47)

A couple of chapters discuss the ins and outs of that in greater detail, including redeemed desires (not everything we desire is something we should pursue). Other chapters discuss the need to do all leaning on God’s power and enabling, realizing we can’t do it on our own, handling criticism (I especially appreciated the thought that criticism has a purpose even when unfounded), waiting on God’s timing, learning when to say “no.” Probably my favorite chapter was “Wonder.” A close second would be the one on waiting, from which this favorite quote came:

The Spirit came over Mary in a moment, but it took nine months for him to grow. Jesus waited thirty years to begin what we cal his earthly ministry. But really, wasn’t he always being God in the world, from his first breath to his last? He was crucified and waited until day three to resurrect. Don’t lose hope on day two (p. 155).

Another favorite quote came neat the end: “One masterpiece is the work of ten thousand rough drafts” (p. 195).

So what was it I disagreed with so strongly at the beginning? A statement on page 18 that “God is not a technician. God is an artist.” My immediate thoughts ran something like this:

God is a technician AND an artist! When He creates a beautiful sunset, He doesn’t just throw colors in the sky: there is science behind it, and it’s not the less wondrous for that. When you think of the marvels of human biology, the mathematical properties in the universe that enable space travel, and so many other factors involved in his creation, it’s impossible not to see that He is a master technician. (My kids used to have a book titled God Thought of It First, showing that many of man’s inventions were based on properties in creation, like the similarity between how a submarine and a chambered nautilus works). My husband was a physics major and has worked for most of his career in the science of color, first in textiles and now in plastics. He can’t just say, “Hmm, this looks a little too blue” and add a dab of another color until it looks right, like an artist might do on a canvas: there are formulas involved which enable them to get the right color not just for the moment, but to be able to reproduce it in massive quantities for carpet fiber, plastic bottles, and even paint in artist’s tubes.

I think Emily would agree that God is a God of detail, engineering, and technology as well as artistry and creativity. But that’s not really what she is talking about when she says God is not a technician. She precedes that statement with these thoughts:

Is he only a God of right answers and right angles and acceptable behavior? Have we exalted the will of God and the plans of God above God himself?

He does not manage us, to-do list us, or bullet-point us. He loves us. Is with us. And believing him feels impossible, until we do, like a miracle, like lukewarm water turning merlot red right there in the cup. And hope sprouts new, because God doesn’t give us a list. He invites us into the story (p. 17).

Actually He does give us a list or two, like this one and this one. But, yes, I do get the point she’s making that we’re not saved or sanctified by keeping lists or commandments. It’s possible to keep commandments and totally miss God, as the Pharisees did.  We’re saved by grace through faith and sanctification and service come about the same way. Or, as she says later, when discussing Jesus washing the disciples’ feet and then instructing them to do likewise, “Maybe Jesus is inviting them into a relationship of do as I do rather than pointing to a list and saying, Copy me” (p. 75).

So once I understood where she was coming from, I could agree, but I still had to fight against that feeling when similar statements were made: “Technicians don’t move us. Artists do” (p. 14); “When a poet writes a poem, he isn’t writing a technical manual or a how-to book” (p. 26); “Are you living like a programmer instead of a poet?” (p. 135).

The bulk of the book is written from a right-brained, creative, artsy vantage point, which will appeal to that kind of thinker but not so much to the more left-brained, literal, logical one (I know the whole left vs. right-brained theory has been labeled incorrect now, but you know what I mean.) Although I struggled with that at times, and I wouldn’t agree with every little sub-point, overall I appreciated the message of the book, was inspired and challenged, and gleaned a lot from it. I’ll close with a section which I think sums it up:

What if we approached the critic, our jobs, the kids at our table with the same wonder and anticipation an artist has when she approaches the canvas? What if we decided our purpose in this world really is to reflect the glory of God?

Would we begin to see ourselves as wildly free to approach the universe – the meal plan, the work project, the yard sale, our neighbor, the roof leak, the doctor appointment, the eternal destiny of our children – to approach it all with a wide-eyed wonder, with an edge-of-your-seat breath, with an expectation that any minute God will show himself in a way we have not yet seen? And he’ll likely do it through us?

When we embrace the beauty of our design, when we recognize that he has made us to be the unique expressions of himself, when we receive the gifts he has equipped us with and have the courage to pour them out, we worship. What else would it be? (pp. 188-189).

10 thoughts on “Book Review: A Million Little Ways: Uncover the Art You Were Made to Live”