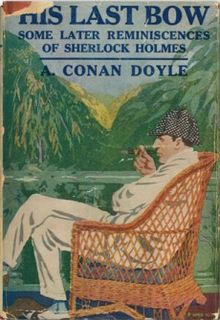 His Last Bow: Some Reminiscences of Sherlock Holmes by Sir Arthur Conan Doyle is another collection of his Sherlock Holmes short stories, most originally published in magazines. One story, “The Cardboard Box,” was originally in another volume and added to this one in later printings.

The book opens with a preface from Dr. Watson saying that Holmes was retired and doing well except for occasional bouts of rheumatism. He had refused many offers to take up cases until called into service by his government on the eve of war with Germany. Watson states that the last story in this collection contains the details of that incident, and the other stories are some that he has had on hand for some time but not used in his other collections, but added them here to supplement the last story.

There are eight stories all together, covering various time periods (some when Watson was married, some when he was rooming with Holmes. Most contain trademarks of the other Holmes stories. A few are different, however.

In “The Adventure of Wisteria Lodge” (sometimes published as two stories, “The Singular Experience of Mr. John Scott Eccles” and “The Tiger of San Pedro”), the inspector on this case, Inspector Baynes, is the only police official that Holmes has thought well of and thought almost as competent as himself. He had learned to work with Lestrade and Grayson and others, though he usually figured out the case long before they did. But Baynes he admired and predicted he would go far in his profession.

Some of the other cases involve assumed identities, stolen naval plans, a woman receiving severed ears in the mail, an incident that kills one sister and drives two brothers mad, a kidnapped woman, and Holmes’ seemingly fatal illness.

The last story, “His Last Bow,” is different in a few ways. It opens with someone other than Holmes or Watson, is told in the third rather than the first person, and is a spy story more than a detective story. It’s set after Holmes has retired but has been asked to help his government, and when it’s over, he and Watson reminisce as if they haven’t seen each other in a while and are catching up. I wonder if Doyle wasn’t planning to write more Holmes stories after this. There is one Holmes novel whose writing overlaps the time period when these stories were published, and one more collection of stories after this one. If all the stories were laid our chronologically, this one would be the last in the time frame though it’s not the last one written. It was published during WWI, and this quote was probably meant to encourage Doyle’s fellow countrymen:

“Good old Watson! You are the one fixed point in a changing age. There’s an east wind coming all the same, such a wind as never blew on England yet. It will be cold and bitter, Watson, and a good many of us may wither before its blast. But it’s God’s own wind none the less, and a cleaner, better, stronger land will lie in the sunshine when the storm has cleared.”

In many of the stories, Holmes makes reference to Watson’s writings and even offers suggestions about what to include, even though he doesn’t like the way Watson tells the stories.

I found further evidence that Holmes was neither always rude nor antisocial or even autistic, as some modern portrayals seen to suggest. When interrupted from a project when asked to take on a case he is not interested in at first, Watson notes that  “Holmes was accessible upon the side of flattery, and also, to do him justice, upon the side of kindliness. The two forces made him lay down his gum-brush with a sigh of resignation and push back his chair.” In another case,

Holmes leaned forward and laid his long, thin fingers upon the woman’s shoulder. He had an almost hypnotic power of soothing when he wished. The scared look faded from her eyes, and her agitated features smoothed into their usual commonplace. She sat down in the chair which he had indicated.

In another place he said, “[The landlady] was fond of him, too, for he had a remarkable gentleness and courtesy in his dealings with women. He disliked and distrusted the sex, but he was always a chivalrous opponent.”

Watson does admit, though, in another case that, “It was one of my friend’s most obvious weaknesses that he was impatient with less alert intelligences than his own,” in this case Lestrade’s.

Holmes also doesn’t misuse Watson, as some modern depictions portray. In one case here he sends Watson on a mission when he can’t leave the case he is currently involved with, and when he does catch up with Watson, he exclaims,

“I cannot at the moment recall any possible blunder which you have omitted. The total effect of your proceeding has been to give the alarm everywhere and yet to discover nothing.”

“Perhaps you would have done no better,” I answered bitterly.

“There is no ‘perhaps’ about it. I HAVE done better. Here is the Hon. Philip Green, who is a fellow-lodger with you in this hotel, and we may find him the starting-point for a more successful investigation.”

The only time that he seems genuinely rude was when he was ill but did not want Watson to examine him, saying, “After all, you are only a general practitioner with very limited experience and mediocre qualifications. It is painful to have to say these things, but you leave me no choice.” Watson “was bitterly hurt.” But later Holmes discloses that he did not want Watson near him because he was on a case to try and catch someone, and Watson’s “astute judgment” would determine on a close examination that Holmes was well, and Holmes needed him to believe in the urgency of the situation in order to convince the man Holmes wanted to come. He assures Watson of his high “respect for your medical talents.”

In one unguarded moment after Watson saves both their lives, Holmes declares,

“Upon my word, Watson!” said Holmes at last with an unsteady voice, “I owe you both my thanks and an apology. It was an unjustifiable experiment even for one’s self, and doubly so for a friend. I am really very sorry.”

“You know,” I answered with some emotion, for I have never seen so much of Holmes’s heart before, “that it is my greatest joy and privilege to help you.”

He relapsed at once into the half-humorous, half-cynical vein which was his habitual attitude to those about him.

There was one other glimpse in Holmes’ heart when, in a case where someone avenged the death of his loved one, Holmes said, “I have never loved, Watson, but if I did and if the woman I loved had met such an end, I might act even as [he] has done.” That also seems further proof of something I asserted in an earlier book, that Irene Adler was not the love interest many thought her to be, but rather just a woman he admired for being one of the few people to ever outsmart him.

I listened to the audiobook read by Simon Vance, who did a great job with the different accents and inflections. Overall I enjoyed these continuing adventures of Holmes and Watson and and discovering more of their personalities. I look forward to the last two books.

5 thoughts on “Book Review: His Last Bow: Some Reminiscences of Sherlock Holmes”