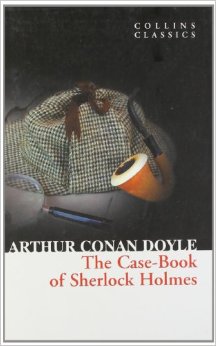 The Case-Book of Sherlock Holmes is the last of the Holmes stories by Sir Arthur Conan Doyle. It opens with a preface from Doyle himself, rather than Watson, saying that “I fear that Mr. Sherlock Holmes may become like one of those popular tenors who, having outlived their time, are still tempted to make repeated farewell bows to their indulgent audiences. This must cease and he must go the way of all flesh, material or imaginary.” He says that he “had fully determined at the conclusion of The Memoirs to bring Holmes to an end, as I felt that my literary energies should not be directed too much into one channel,” but he later revived him (reportedly due to public demand, though he doesn’t say so here). He goes on to note:

I have never regretted it, for I have not in actual practice found that these lighter sketches have prevented me from exploring and finding my limitations in such varied branches of literature as history, poetry, historical novels, psychic research, and the drama. Had Holmes never existed I could not have done more, though he may perhaps have stood a little in the way of the recognition of my more serious literary work.

The Wikipedia article on Doyle states that he “wrote seven historical novels, which he and many critics regarded as his best work,” as well as other pieces, but he’s best known for Sherlock Holmes.

A couple of variations in this volume are two stories written as by Holmes himself rather than Watson and one written from a third person point of view. One of the two stories by Holmes occurred when he criticized Watson’s style of storytelling, and Watson told him he should give it a try; the second occurred after Holmes had retired and was no longer in touch with Watson when he came upon an unexpected case.

Twelve stories are included in this book, with some editions arranging them in different orders. The very last Holmes story written was “The Adventure of Shoscombe Old Place” in 1927.

The stories include a variety of cases brought to Holmes’ attention in a variety of ways, most often by someone connected with the case. The include a woman seen only in a veil, a mother accused of vampirism, a missing diamond, the theft of papers from a dead son’s trunk, a man searching for two other men with an unusual last name, a jealous wife, an unusual sea creature, a missing soldier, and a wax effigy of Holmes. In one of them, Holmes says, “In all my chronicles the reader will find no case which brought me so completely to the limit of my powers. Even my imagination could conceive no solution to the mystery.”

They occur in a variety of times as well: some when Watson was rooming with Holmes, some when he was not, one after Holmes retirement.

A few sentences stood out to me concerning Holmes’ regard for Watson. In “The Case of the Blanched Soldier,” one of the stories written from Holmes point of view rather than Watson’s, he says, “Speaking of my old friend and biographer, I would take this opportunity to remark that if I burden myself with a companion in my various little inquiries it is not done out of sentiment or caprice, but it is that Watson has some remarkable characteristics of his own to which in his modesty he has given small attention amid his exaggerated estimates of my own performances.” He says in this same story, “The good Watson had at that time deserted me for a wife, the only selfish action which I can recall in our association. I was alone.” In “The Adventure of the Mazarin Stone,” the one written in the third person, it’s said that, “Watson was always the man of action, and he rose to the occasion.” In one story in which Watson was wounded, Holmes cried out, “You’re not hurt, Watson? For God’s sake, say that you are not hurt!” Watson thought to himself, “It was worth a wound–it was worth many wounds–to know the depth of loyalty and love which lay behind that cold mask. The clear, hard eyes were dimmed for a moment, and the firm lips were shaking. For the one and only time I caught a glimpse of a great heart as well as of a great brain. All my years of humble but single-minded service culminated in that moment of revelation.”

After receiving a note from Holmes in one case which simply read, “Come at once if convenient–if inconvenient come all the same. S.H.,” Watson muses:

The relations between us in those latter days were peculiar. He was a man of habits, narrow and concentrated habits, and I had become one of them. As an institution I was like the violin, the shag tobacco, the old black pipe, the index books, and others perhaps less excusable. When it was a case of active work and a comrade was needed upon whose nerve he could place some reliance, my role was obvious. But apart from this I had uses. I was a whetstone for his mind. I stimulated him. He liked to think aloud in my presence. His remarks could hardly be said to be made to me–many of them would have been as appropriately addressed to his bedstead–but none the less, having formed the habit, it had become in some way helpful that I should register and interject. If I irritated him by a certain methodical slowness in my mentality, that irritation served only to make his own flame-like intuitions and impressions flash up the more vividly and swiftly. Such was my humble role in our alliance.

Other interesting features in this story: in one Holmes refused to eat, and when Watson asked why, he replied, “Because the faculties become refined when you starve them. Why, surely, as a doctor, my dear Watson, you must admit that what your digestion gains in the way of blood supply is so much lost to the brain. I am a brain, Watson. The rest of me is a mere appendix. Therefore, it is the brain I must consider.” I don’t think that’s the wisest course of action for most people, but it is interesting that he thought of himself primarily in terms of his brain. That appears to be a factor in his suppression of emotion and lack of relationships as well. Holmes says in one story: “Women have seldom been an attraction to me, for my brain has always governed my heart, but I could not look upon her perfect clear-cut face, with all the soft freshness of the downlands in her delicate colouring, without realizing that no young man would cross her path unscathed.”

Another observation I thought unusual for Holmes occurred when a man was taking a potion to seem to become more youthful: “There is danger there–a very real danger to humanity. Consider, Watson, that the material, the sensual, the worldly would all prolong their worthless lives. The spiritual would not avoid the call to something higher. It would be the survival of the least fit. What sort of cesspool may not our poor world become?”

One sentence that struck me as particularly clever: “When his castle in the air fell down, it buried him beneath the ruins.”

It’s been fun to read of the “real”…or at least, the original Sherlock Holmes. One of my main curiosities was whether he was really as rude as some modern conceptions of him make him out to be. I was happy to find he wasn’t. He was eccentric in some ways and could be egoistical, but he knew how to interact with people when he needed to and could even be kind and comforting when needed. He was a classic introvert and only had a very few close friends. I was surprised to find that his nemesis, Moriarty, only appeared in two books, with just a mention in one of them. I was also pleased to find that Watson was not a doddering old man, but was vibrant, described as “fleet of foot” in one story, and that Holmes valued him for his medical skills as well as his skills with a revolver, besides his being a good sounding board.

I was concerned, before reading the stories, about his rumored drug addiction, but it wasn’t enough to be an addiction, only appeared in a couple of books, and Watson talked him out of using drugs any more. I was also concerned because I had heard there were instances of spiritism in the book, but I did not find any. I did just read yesterday that Doyle was heavily involved in such, but Holmes, although he was not a religious man, did use various Biblical phrases and did not participate in anything like spiritism. There were a couple of cases where there were evidences of voodoo or something similar, but those involved were always portrayed as being from some island or another.

Here are my reviews of the other Holmes books:

I listened to the first books read by various narrators, and the last ones read by Simon Vance in this collection, who once again did a wonderful job. This edition of all the Holmes stories together came through on a good sale, so I got it, but it was maddening that the divisions weren’t according to the books. They are just run together one after the other, which is fine if you’re listening to them that way, but it’s hard to find a particular book. Thankfully one listener posted a table of contents which shows where the various books begin and end.

I don’t feel all warm and fuzzy toward these stories as I do some other books, so I don’t know that I’d reread or relisten to them, at least not any time soon. But they were fun while they lasted! And Holmes is such an iconic figure with so many cultural references to him, it’s nice to be familiar with him now.

4 thoughts on “Book Review: The Case-Book of Sherlock Holmes”