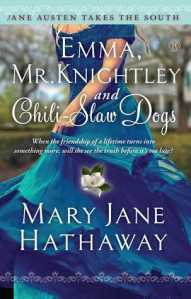 This title of Emma, Mr. Knightly, and Chili Slaw Dogs by Mary Hathaway intrigued me when I saw it listed on fellow “What’s On Your Nightstand” participant Tonia’s post in May (which is one advantage of the Nightstand posts – new book recommendations!) I got it to read for the the Austen in August Challenge for which we can include spin-offs of Austen’s books as well as books by or about her.

As you can guess by the title, this book is a take-off of Austen’s Emma (linked to my review). It’s part of a series titled Jane Austen Takes the South, the first of which was Pride, Prejudice, and Cheese Grits (which I have not read but have put on my TBR list!) The books are all set in the modern-day South, this one in a small town called Thorny Hollow, though I don’t remember if the state is named.

Caroline Ashley was a promising journalist for The Washington Post, but her father’s sudden death has left her mother unable to cope, so Caroline left her job to care for mother and their antebellum house. She chafes over helping with society luncheons and bridge parties and has plans someday for more articles and a book, but nothing ever seems to come to fruition. The one bright spot in her life is longtime family friend Brooks Elliott, a journalism professor and heir to a nearby estate. A costumed Jane Austen-themed party and Civil War reenactors add to the story.

When an exciting, handsome newcomer offers Caroline a job in a new publishing venture, Brooks distrusts him, but Caroline welcomes the offer. And when a neighbor’s beautiful, accomplished granddaughter seems to vie for and catch Brooks’ Caroline, Emma is dismayed.

Knowing the book is based on Emma, we know where the plot is ultimately going to go, but it’s fun to see how it plays out in this setting and to look for the other reworked characters in the story. Not all of Austen’s characters and scenes are here: I don’t think I saw a Mr. Elton and his conniving wife as well as some others. Plus there are a few characters and plot points not in the original books. But the story isn’t meant to be a carbon copy: it’s a modern-day retelling.

There are modern attitudes as well, which is only natural, but one I was sad to see was towards Caroline’s mother. Though Emma’s father was a hypochondriac and a little ridiculous at times, everyone was kind and solicitous towards him, with Emma even declining to marry out of care for him. In this book, both Caroline and Brooks speak somewhat disdainfully of her mother, though later Caroline does come to understand her a little better and they come to an understanding.

I liked that Caroline, who comes from an old-money, well-established family, has to have her thinking challenged in regard to a less fortunate acquaintance and in regard to how others of her set have to handle dealing with their aging homes. Some of these beautiful old homes cost a fortune to maintain, and though there is regret that some of them have to “go commercial” in some way to make it, it’s an understandable and real issue.

I wasn’t sure if the book was marketed as Christian fiction, though the back cover mentions “good Christian women with spunk to spare” as part of the cast. As I looked at some reviews and sites after reading the book, apparently it was, but I’d say it’s light on the Christian aspect. About all I can recall being mentioned along those lines is one character being encouraged to pursue her God-given gifts and Brooks recalling his grandmother’s talk about “ferreting out God’s will” for one’s life. Nothing necessarily wrong with that – some authors and readers, even among those who like Christian fiction, don’t like it to be heavy-handed, and I agree that it needs to be natural and not preachy or forced. But, as I’ve said before, there are normal things you’d expect to see Christian people doing that are largely absent here.

There’s also one scene that reviewers argued over, some calling it R-rated, some saying it’s clean and merely a kiss. I’d say it goes beyond being merely a kiss, but while it’s not R-rated, it’s more PG 13 than I’d expect to see in a book like this. It’s meant to jolt the characters into realizing their feelings for each other and into changing the dynamic, but I think that could have been done with a “mere kiss.”

Overall I enjoyed the book and am looking forward to reading more in the series.

The back of the book as well as several blurbs online say that “Mary Jane Hathaway is the pen name of an award-nominated inspirational fiction writer who spends the majority of her literary energy on subjects un-related to Jane Austen.” I do wonder why she chose a pen name for this series, especially since her real name is mentioned on Amazon, and she owns up to these books on her blog. She is also a “homeschooling mother of six young children,” which make me question my excuses for not getting a book written! There is a Facebook page for the Jane Austen Takes the South series here.