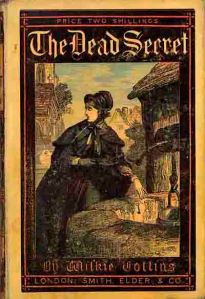 The Dead Secret by Wilkie Collins opens with the lady of the Treverton house facing the last hours of her life. She has a secret known only to herself and her maid which she has tried to share with her husband, but couldn’t. So she calls her maid, Sarah Leeson, in to help her write a note to be given to her husband after her death, despite Sarah’s protests. After the task is done, Mrs. Treverton makes Sarah swear that she will not destroy the note nor take it with her if she leaves the house, but she passes away before she can make her swear to give it to Captain Treverton. Sarah feels she can keep her word without actually giving the note to him by hiding it in an unused part of the house. Then, inexplicably, she writes Captain Treverton a note herself explaining that there was a secret but it won’t hurt anyone if it is not revealed, apologizing for leaving, and asking him not to search for her. Then she disappears.

The Captain does search for her, but to no avail.

The story then jumps 15 years ahead. The Treverton’s daughter, Rosamond, marries her love, Leonard Frankland, who became blind during their engagement. Leonard’s father now owns Rosamond’s old home, Porthgenna Tower. The Franklands plan to live in Porthgenna Tower and restore even the old unused rooms.

The rest of the book tells of learning about the hidden note in an unusual way, the search for it, what the secret was, and how it affects everyone involved. By the way, don’t look at the Wikipedia article for this book unless you want the plot totally spoiled in the opening paragraphs.

I had read and very much enjoyed Collins’ The Woman in White last year and wanted to read more of him. For this year’s Back to the Classics Challenge, I decided to read to try one of his earlier works for the forgotten or lesser-known classic category. Though Wilkie was a friend of Dickens, and this book contains that era’s descriptiveness and indirectness that modern readers aren’t fond of, I felt Collins’ writing was a bit tighter than Dickens’ and not so rambly. Critics don’t seem to think this is one of his best, but I really enjoyed it. I had some idea what the secret would relate to, but the route to it and the details worked out differently from what I expected. I thought his characterizations of Rosamond, Leonard, Sarah, and Sarah’s Uncle Joseph (with whom she stays after leaving Porthgenna Tower) were quite well done. I am eager to read even more of Wilkie Collins.

A couple of my favorite sentences:

He was one of those tall, grave, benevolent-looking men, with a conical head, a deep voice, a slow step, and a heavy manner, who passively contrive to get a great reputation for wisdom without the trouble of saying or doing any thing to deserve it (Chapter 3)

She spoke on the principle of drowning the smallest possible infusion of ideas in the largest possible dilution of words (Chapter 4).

You can find The Dead Secret online at Project Gutenberg here or free for the Kindle here, or, of course, in paperback at various locations.