We’ve had a two-week break from FFF since the last two Fridays were on holidays. I’ve missed it, but I appreciated the break as well. I don’t know if I could have gotten posts in on those days, but even if I could have, I would not have had time to visit around, and I think if someone is going to participate in some thing like this, they should visit at least some of the others. I think most of us were probably in this boat. It’s funny, though, that FFF has become such a habit that I kept thinking of things I needed to write down for it. I’m thankful Susanne started us on this habit of noticing and acknowledging our blessings.

Some weeks I do keep a running list of things for the FFF, and I wish I had this time, because there was so much to be thankful for that I’m sure I can’t remember it all. I won’t try to recap the whole last three weeks, but here are some highlights of my favorite things.

1. Christmas, of course. From our “traditional” breakfast of cinnamon rolls, sausage rolls, and fruit, to reading the Christmas story, to a wonderful time exchanging gifts, especially with a 19-moth-old grandchild. 🙂 To Christmas dinner with ham, cheesy potatoes, green bean casserole, to desserts of four different kinds of pies, to family time and enjoying being together. I did mess up Christmas dinner in two ways – I didn’t check to see how long the ham would take to bake, and when I started getting it ready, saw it was going to take much longer than expected. So we ended up having it for the evening meal rather than early afternoon. And then I had frozen rolls that I was supposed to take out to rise 3-5 hours before we needed them – and I totally forgot. But my family overlooked my oversights. 🙂 I was also thankful that at some point during the week and a half of “Christmas break,” everyone pitched in to help in some way. More people in the house make for more food prep, dishes, etc., so it’s really nice to have help in those areas.

This is Timothy with a couple of his gifts – a child-sized chair and a stuffed doggie. 🙂 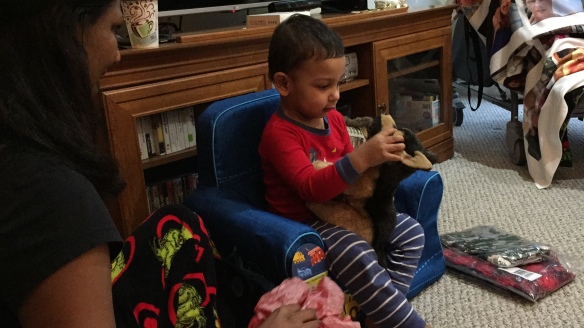 2. Family time. My oldest son came down and Jason and Mittu were able to be here a good bit even though Jason had to work a lot of overtime. It was fun just to sit and catch up, but we also enjoyed playing games, watching movies, going bowling, and doing a lot of eating. 🙂

3. Harvest loaf cake. I made myself wait to make it until Jeremy came. I made extras for gifts for freezing and for later, and we’re working on the last mini-loaf currently.

5. A perfect gift. It’s hard to know what to get for my mother-in-law at her stage of life. But somewhere a while back I saw someone mention a blanket gotten through collage.com which had family member’s pictures on it, so I tucked that idea away for Christmas. I was thoroughly pleased with how well it came out and surprised at how clear the photos looked on a fleece blanket (this is not an ad – I am just a pleased customer!) I can’t show you the whole thing because I don’t have everyone’s permission, but I made a row for each of her kids and their families, and here is our row:

They had a more contemporary design where you could put the photos in a hodgepodge way in different sizes, but I couldn’t make the rows work that way.

I’ve also enjoyed end of the year activities like looking through the year’s posts and book reviews to choose favorites and then making reading plans for the year. I don’t usually make New year’s resolutions or choose words for the year for various reasons, but I do usually take some time the first week of the year after everyone else has gone back to work to evaluate and maybe set some goals for the year. So far my quiet week to do that hasn’t happened yet. 🙂 Much to do, many interruptions, and much of it taking much longer than planned. So maybe next week!

It’s funny how it’s such a joy to change up the routine for the holidays, and then it’s nice to get back to the routine afterward, yet it’s still a bit sad to have the kids gone and the decorations down. But I think we’re pretty much transitioned to the New Year now, with its own tasks and things to look forward to.