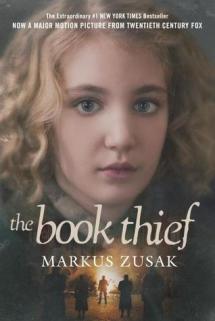 The Book Thief by Markus Zusak begins in the Germany of the 1930s with ten year old Liesel Meminger, who is being taken to German foster parents. Her own parents were “taken away” because they were Communists and her brother dies en route, so she arrives alone and very frightened. Her foster father, Hans Hubermann, is kind and gentle and comforts her when she wakes up with nightmares. Her foster mother, Rosa, seems gruff at first, calling her and everyone else an endless stream of bad words, but soon Liesel learns it’s just Rosa’s way, that she does have a caring heart underneath the gruff exterior.

Though Liesel is ten years old, she is illiterate, so in school she is grouped with the younger children. Hans only got through third grade himself, but he tries to help Liesel with the one book in the house – the grave digger’s handbook that a worker accidentally dropped at her brother’s burial, which she stole just as a remembrance of him. Hans is a painter, and he furthers Liesel’s lessons in the basement, writing letters and words on the walls, which he can repaint as needed.

For a few years life goes on as normal, or as normal as possible as the clouds of WWII gather on the horizon. Liesel becomes best friends with neighbor and classmate Rudy Steiner and learns to read more proficiently. The children are all made to join the Hitler youth, and one activity they are required to go to is a book burning. As the crowd disperses, Liesel sees a book that is singed but hasn’t burned, and when she thinks no one is looking, she takes it – her second book theft. But then she realizes someone has seen her, and lives in terror of what might happen to her. As it turns out, her observer is the mayor’s wife, Ilsa Hermann, who, instead of turning Liesel in, invites her to her home to use her library.

Times get harder as rations are enacted, Rosa loses laundry customers due to the financial situation, and Hans loses painting customers because he’s stigmatized after painting over slurs on a Jewish man’s door.

Years earlier in WWI, Hans’s life was saved by a Jewish friend, and when he visited the man’s wife and son, he told them to call on him if they ever needed anything. They do so in quite an unexpected way: the son, Max, is now a grown Jewish young man seeking refuge. The Hubermanns hide him in their basement and share their already meager food rations with him.

The plot goes on from there with the dangers of air raids, of discovery, of being sent to war and not making it back or returning maimed, of the tightened Nazi atmosphere.

The story is told in an odd way with Death as the narrator, but he offers a unique perspective. He, or rather, the author, uses quite a lot of foreshadowing  – not even shadowing, but foretelling what’s going to happen, like one character’s death. That bugged me quite a lot at first: I’d rather have the drama of building up to it and then being surprised. In one place Death says, after revealing a significant coming situation,

“Of course, I’m being rude. I’m spoiling the ending, not only of the entire book, but of this particular piece of it. I have given you two events in advance, because I don’t have much interest in building mystery. Mystery bores me. It chores me. I know what happens and so do you. It’s the machinations that wheel us there that aggravate, perplex, interest, and astound me. There are many things to think of. There is much story.”

In another place he says he foretells a bit to soften the coming blow. He also narrates in a zig-zag way, jumping ahead, then backtracking, that’s a little confusing at times.

The worst thing about the book is the excess of profanity. I had read somewhere that there were a few bad words, but they were mostly German, so the non-German reader is spared the full impact of them. That didn’t turn out to be true. Both general bad words and taking the Lord’s name in vain pervade seemingly every page. If I had known just how extensive it was going to be, I would have been less inclined to read the book. I had read somewhere that the author didn’t specifically write this as a young adult novel, but rather wrote it for a general audience; however, it’s seems to have been marketed as a YA novel, and some of the explanation of things adults wouldn’t need explained seems to indicate it’s written more for young people, which makes the profanity all the more atrocious.

Aside from the profanity, though, it’s a beautiful story. It’s mainly about the power of words. As Liesel’s world opens up with reading, she finds books a help as she reads to Max to alleviate boredom, to comfort him when he is sick, and to help distract people in  air raids shelter. But at one point, after so much loss in her life, which she traces back to Hitler, she hates the power of words for evil and rips apart a book, vowing to never read again. Then she is given a blank book to write her own words and discovers the healing power of being able to express her own thoughts and to combat hate with words. She concludes, “I have hated the words and I have loved them, and I hope I have made them right.”

The writer does have a knack for descriptive phrasing:

The brute strength of his gentleness

A snowball in the face is surely the beginning of a lasting friendship.

The church aimed itself at the sky.

The gun clicked a hole in the night.

Her teeth elbowed each other for room in her mouth.

His blond hair peppered with dirt.

Night watched. Some people watched it back.

Somewhere, far down, there was an itch in his heart, but he made it a point not to scratch it. He was afraid of what might come leaking out.

It’s also a book about humanity. Death often muses on humans’ penchant for good and evil:

“I’m always finding humans at their best and worst. I see their ugly and their beauty, and I wonder how the same thing can be both.”

“I guess humans like to watch a little destruction. Sand castles, houses of cards, that’s where they begin. Their great skill is their capacity to escalate.”

“So much good, so much evil. Just add water.”

“I wanted to explain that I am constantly overestimating and underestimating the human race – that rarely do I even simply estimate it. I wanted to ask her how the same thing could be so ugly and so glorious, and its words and stories so damning and brilliant…I am haunted by humans.”

The last is one of many examples of irony in the book – Death haunted by humans, when usually humans are haunted by the thought of death. Another is when Max carries a copy of Mein Kampf with him on his way to Hans, a book in which Hans had hidden a key. Thus the book which condemns him is instrumental in saving him.

As to death’s conundrum over humans, I have often pondered over the atrocities committed by people against their fellow men through the years, particularly in the case of slavery, prisoners of war, treatment of the Jews, child abuse, etc.  Humans’ occasional penchant for beauty and good comes from having been made in the image of God. But that image has been marred by sin – in all of us. It’s not a matter of fanning the flames on the good side so that it will outweigh the bad. We all fall short of the glory of God – some to a further degree than others, but none of us can ever attain that original image by our own efforts. Wondrously, God provided a Savior to forgive our sin and draw us back to that image.

In some ways, the book itself reflects Death’s summation of humans: kindness and beauty in unexpected places, profanity, darkness, and cruelty in others.

I enjoyed the audiobook, wonderfully read by Allan Corduner. I haven’t yet seen the recent film based on the book, but want to soon. From what I have read, it doesn’t have the profane words that the book does. I don’t know how they condensed almost 14 hours of reading into a 2 hour movie and what they might have changed or left out – we’ll see! Here is a trailer for it: