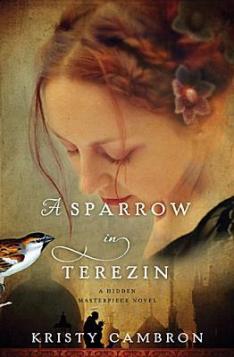 Kristy Cambron’s The Butterfly and the Violin was one of my favorite books read last year, so I was delighted when its sequel, A Sparrow in Terezin, came through on a Kindle sale.

As with her first book, this one follows two timelines. The contemporary one picks up where it left off in the last one, with William and Sera getting married, only to have him get arrested shortly afterward. In trying to sell off some of his family’s assets, he unwittingly sold some things that he didn’t realize were no longer his, and now he is being investigated for fraud. To try to clear his name, Sera delves into a past that he’s unwilling to reveal.

The other timeline begins with a young woman, Kaja, heading to a Prague train station with her family in 1939. Her father is Jewish and her mother a Christian, but being even half Jewish is enough to get one in trouble at that time in Eastern Europe. Kaja had thought her whole family was going and is stunned to learn at the train depot that only she and her sister and brother-in-law are leaving: her parents are staying behind. Kaja protests, but it has already been decided. After spending a year with her sister in Palestine, she travels to London to work at a newspaper. There she meets Liam, a reporter who is kind and helpful to her. She suspects he is involved in something covert. Just as their relationship grows to the point of commitment, Kaja learns that her parents are in danger and travels undercover to Prague to help. But she’s caught and sent with her family to the Terezin prison camp.

The two timelines intersect with a little girl named Sophie, whom Adele helped in the last book and whom Sera met at the end. Kaja’s path also crosses Sophie’s and eventually impacts William’s family.

I mentioned in my review of Butterfly that there were a few awkward places in the writing, but I felt the story superseded them. I wished I had made note of them now, because there were some here as well. There were a few things that didn’t make sense to me at first, though they were a little more clear when I looked at them again just now.

One of my pet peeves in movies in when there is some kind of calamity, and the couple involved decide that’s a good time to kiss. That happened in this book. I seriously doubt that if I’m outside with bombs falling in London, I’m going to choose that moment to kiss. No, I’m going to be running for cover, and fast.

I didn’t end up loving this one as much as I did the first one, but it’s still a good story, Kaja’s especially. I always wonder how people could not only survive, but extend grace and love in a situation as awful as a prison camp. I thought the faith element was woven in naturally.

Genre: Christian fiction
My rating: 8 out of 10
Potential objectionable elements: None that I can recall unless one is very sensitive to descriptions of war.
Recommendation: Yes.

7 thoughts on “Book Review: A Sparrow in Terezin”