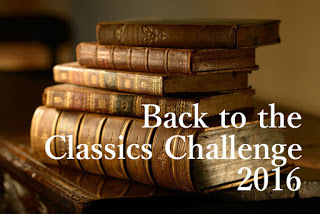 I’ve read the following for the Back to the Classics challenge (titles link to my reviews) hosted by Books and Chocolate:

Participants are eligible for prizes with a certain number of entries for books read. Since I read all twelve categories, I’m eligible for three entries. Yay!

I believe I listened to all of these via audiobook, but with some I got a free Kindle version because I wanted to read parts over.

I actually finished back in July: it helped that many of these were short, which I didn’t realize when I picked them. I could have read/listened to more and have accumulated more through sales, but I wanted to save them for next year’s challenge.

I’ve mentioned that I somehow missed being exposed to a lot of classics growing up, and I have made it a mission to seek them out and educate myself as an adult. Some of these I probably would not have chosen on my own, but I am thankful this challenge caused me to diversify my reading a bit. I enjoyed all of them in their own way, but probably the one I enjoyed most was Wind in the Willows.How did I get to be on the far side of 50 before reading that?!

Thanks, Karen, for the challenge! I am looking forward to next year!

3 thoughts on “Back to the Classics Challenge Wrap-Up”