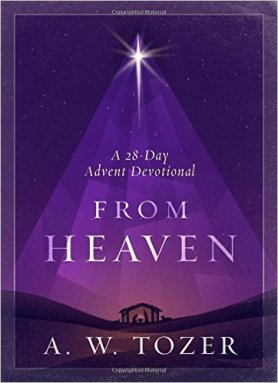 I like to read a Christmas devotional during December, so I got From Heaven: A 28-Day Advent Devotional by A. W. Tozer when I saw it on a recent Kindle sale for 99 cents since I have enjoyed what I have read of Tozer in the past.

Compiled by unnamed editors at Moody Publishing from Tozer’s various writings and sermons, it is probably different than a book like this that Tozer would have written himself. There is not really a logical progression from point A to point B or developing and building on truths throughout the book. It’s just a series of isolated bits somewhat on the theme of Christ’s coming to Earth in both His first advent, which we celebrate at Christmas, and His second advent, when He returns. That lack of progression or development plus the entries’ being taken out of context from their original sources are the book’s greatest weaknesses. Introductory remarks convey that profits from the book sales will go to help Moody students, so this may have even been assembled as something of a fund raiser.

But it is Tozer, after all, who is a deep thinker and often has something noteworthy to say, which is the book’s greatest strength.

Some of the chapter titles are What the Advent Established, The Meaning of Christmas, The Logic of the Incarnation, Three Truths Behind Christmas, Light and Life to All He Brings.

Some of the quotes that stood out to me:

Even though you may still be unconverted and going your own way, you have received much out of the ocean of His fullness. You have received the pulsing life that beats in your bosom. You have received the brilliant mind and brain within the protective covering of your skull. You have received a memory that strings the events you cherish and love as a jeweler strings pearls into a necklace and keeps them for you as long as you live and beyond. All that you have is out of His grace. Jesus Christ, the eternal Word, who became flesh and dwelt among us, is the open channel through which God moves to provide.

We must love someone very much to stay awake and long for his coming.

Another reason for the absence of real yearning for Christ’s return is that Christians are so comfortable in this world that they have little desire to leave it.

All of our hopes and dreams of immortality, our fond visions of a life to come, are summed up in these simple words in the Bible record: He came!

The big thing is to be sure we are not lulled to sleep by a false hope, that we do not waste our time dreaming about days that are not to be ours. The main thing is to make today serve us by getting ready for any possible tomorrow. Then whether we live or die, whether we toil on in the shadow or rise to meet the returning Christ, all will be well.

Christmas as it is celebrated today is badly in need of a radical reformation. What was at first a spontaneous expression of an innocent pleasure has been carried to inordinate excess.

In our mad materialism we have turned beauty into ashes, prostituted every normal emotion, and made merchandise of the holiest gift the world ever knew. Christ came to bring peace and we celebrate His coming by making peace impossible for six weeks of each year. Not peace but tension, fatigue, and irritation rule the Christmas season. He came to free us of debt and many respond by going deep into debt each year to buy enervating luxuries for people who do not appreciate them. He came to help the poor and we heap gifts upon those who do not need them. The simple token given out of love has been displaced by expensive presents given because we have been caught in a squeeze and don’t know how to back out of it.

So, we live between two mighty events—that of His incarnation, death, and resurrection, and that of His ultimate appearing and the glorification of those He died to save. This is the interim time for the saints—but it is not a vacuum. He has given us much to do and He asks for our faithfulness. In the meantime, we are zealous of good works, living soberly, righteously, godly in this present world, looking unto Him and His promise. In the midst of our lives, and between the two great mountain peaks of God’s acts in the world, we look back and remember, and we look forward and hope! As members of His own loving fellowship, we break the bread and drink the wine. We sing His praise and we pray in His Name, remembering and expecting!

Tozer is not one to leave you with warm fuzzy feelings, but he does make you think. And though the chapters seem a little disjointed, there is much good food for thought and conviction here.

Genre: Christian non-fiction
Objectionable elements: None.
My rating: 8 out of 10

6 thoughts on “Book Review: From Heaven”