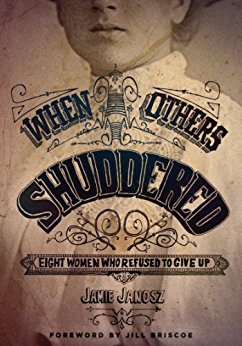 When Others Shuddered: Eight Women Who Refused to Give Up by Jamie Janosz contains eight short biographies of women who lived between 1820 and 1955 who influenced their world for God. They came from different walks of life: some single, some married, some wealthy, some former slaves. They were ordinary women except, as the title indicates, they didn’t “shudder,” they didn’t turn away from circumstances or tasks that many of us would have, and thus they can inspire us.

Fanny Crosby, who was blinded due a mistreatment to her eyes when she was six weeks old. Yet she later thanked God for this “gift,” feeling that it set the course of her life and made her more attuned to God working in and through her. Fanny determined to be optimistic, and her mother and grandmother tried to give her as normal a childhood as possible and teach her about God. She went to a blind school, taught there, married, was active in Christian work. She had always loved music and reading and composed poems since her girlhood, and that grew into hymn writing, many of her hymns well-known ones that we still sing today. The book shares her manner of hymn-writing and many of the incidences that led to hymns.

Emma Dryer was “a thinker, a dreamer, a girl who wanted more out of life” (p. 37). She loved and excelled at school and eventually became a teacher even though extra schooling was thought to “make women unfit for marriage and motherhood” (p. 37). She loved teaching and the orderliness of her life, but wondered if there was something more. A bout of severe typhoid fever hanged her life and made her want to give herself to Christian work. Visiting the growing city of Chicago, she was burdened with the needs of people, particularly women, there who came to the city to work but were often led astray. She felt “the Bible was the solution to the social problems” she saw there (p. 42). A meeting with D. L. Moody and the Great Chicago Fire of 1871 convinced her that she was needed in Chicago. Eventually Moody talked with her about a training school he wanted to establish, something right up Emma’s alley. Emma worked and planned toward that end, but Moody, distracted with his travels, meetings, and other work, didn’t get around the the school for some time. When Emma, who could be outspoken and confrontational at times, wrote strongly to him about it, he was offended and decided to leave Chicago and start a school in NY. But another letter and the urging of his wife and others led him to Chicago and the founding of the Moody Bible Institute.

Nettie McCormick was the wife of Cyrus McCormick, wealthy from his invention of a reaper. A number of her children died, she suffered several miscarriages, two of her children developed mental illnesses, and Nettie herself went deaf at age 34. She “struggled to see God’s hand” (p. 66) but wrestled in prayer and rested in Him. The McCormicks were always generous, giving to many good causes and works, and after Cyrus died, Nettie continued to give wherever she could, even to missionary schools in other countries. She wasn’t self-promotional and did much behind the scenes, but she didn’t stay behind her four walls: she traveled and even planted trees herself in front of a building she had funded. She was close friends with Emma Dryer and a major supporter of Moody and the Institute.

Sarah Dunn Clark grew up wealthy and privileged, but in her mid-twenties felt God’s urging to work in that which will last for eternity. She moved to Chicago and helped in many ways by visiting needy families and establishing a mission Sunday School. She met her husband there: they moved in the same social circles and had similar burdens. They visited slums and jails and opened a small rescue mission “in the heart of what people called ‘the devil’s territory'” (p. 80), which eventually eventually became the Pacific Garden Mission (which you may know of from the radio program Unshackled). George was called by some “the poorest preacher who ever tried to expound God’s Word,” but he was “deeply convicted and spoke emotionally about the condition of the lost” (p. 81). Sarah became the “mother of the mission,” ministering to people on a personal level. “In her quiet way, she extended respect and dignity to people regardless of their condition. It was this steadfast love that broke through many hardened hearts” (p. 87). The Clarks invested all of their money in the mission and lived simply and frugally.

Amanda Smith grew up the child of parents who were slaves at two different farms. Her father purchased his freedom, and the rest of the family was set free as the dying wish of the family’s daughter they tended. Her parents “believed in God,” “demonstrated a calm and steady faith” (p. 92) and were active helpers for the Underground Railroad. Amanda was only able to attend a short time of school and then began domestic work. Lonely one day, she decided to attend church, where the preaching and singing reminded her of home, and she felt God “wanted her, a poor, simple black girl, to serve Him” (p. 93). She wanted to be a “consistent, downright, outright Christian” (p. 99). Her first husband was a drunkard and died; only one of her children lived to adulthood; her second husband deceived her as to what kind of a man he was so she would marry him, deserted his family, and later died. She was invited to camp meetings, began to sing and testify at them, and soon people were paying her expenses to do so at other camp meetings. She had opportunity to travel to England, India, and Africa. She never asked for money, but prayed, and God sent her money that she then used to meet needs she saw in other places. She became active in the Christian temperance union, established an orphanage, and wrote a book about her life.

Virginia Asher became active in Christian work after her salvation, in time particularly drawn to “‘fallen women’ and the madams who ran houses of prostitution. She was often called in to read and pray with the sick, write letters to parents, dress wounds, and whisper words of peace to the dying” (p. 119). She helped care for their children: though she was unable to have her own, she “took in the world of lost souls and mothered them with divine love” (p. 122). She and her husband sometimes entered saloons and ask if they could put on a brief service for their customers – and they were allowed to. She established Business Women’s Councils.

Evangeline Booth was the daughter of William and Catherine Booth, founders of the Salvation Army in London, who “believed in the three ‘S’s while reaching those the rest of society rejected: soup, soap, and salvation” (p. 148). Evangeline remained single and eventually became the head of the Salvation Army in the US, and eventually led it internationally.

Mary Mcleod Bethune was born after the Emancipation Proclamation to parents who had been slaves. She thirsted for education and prayed earnestly for it. God answered through a local mission school and later through scholarships to other schools, eventually to Moody Bible Institute. She had a beautiful singing voice and toured with the choir. She wanted to be a  missionary in Africa, but God closed the door. She eventually established a school in Florida with the meagerest of supplies, in opposition to the white community and the KKK, which eventually joined with another college to become Bethune Cookman. She became an advisor to presidents, eventually taking the newly created position of administration of the Office of Minority Affairs for FDR and then other government posts, and established the National Council of Negro Women. She realized her dream of going to Africa when as a US representative she went to Liberia for the inauguration of their new president when she was in her seventies.

Along with more detail about the life and faith of these women, there are three chapters on “Woman and Education,” “Women in Missions,” and “Women in Politics,” detailing a bit of the history of the times in each of those areas. A final chapter wraps up “Being That Kind of Woman,” discussing some of the key features they had in common. None had a trouble-free life: some dealt with poverty, health issues, marital problems, deaths of children, opposition. None were faultless or flawless. But each sought to follow God in the way that He led them and relied on Him for what they needed to do so.

You may have noticed that most of them had some connection with D. L. Moody and/or the Moody Bible Institute. That’s because the author is a professor at Moody and her initial research into Emma Dryer’s life led her to a study of all these women.

9 thoughts on “Book Review: When Others Shuddered”