I’ve enjoyed reading end-of-the-month posts from a few blog friends for some time now. I’ve thought about joining in, but I already share the highlights of each week in the Friday’s Fave Fives, so I thought perhaps a monthly recap might be redundant. And then the last couple of months as I have considered it, I wasn’t able to do it before the actual end of the month, so I put it off. That’s the case again this month, but I thought I’d go ahead and give it a whirl and see what happens. 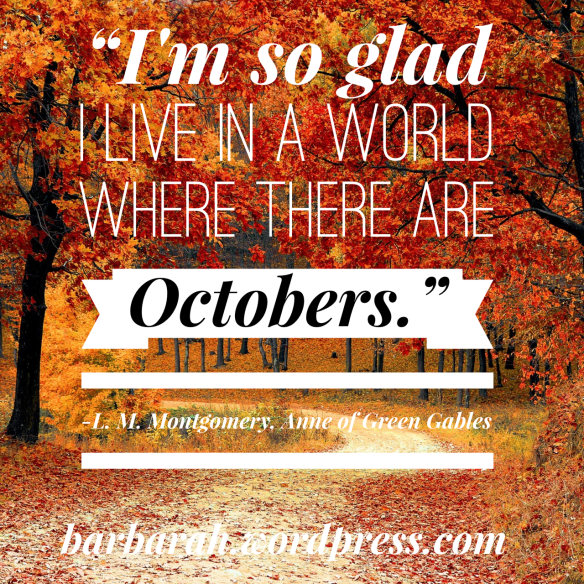 I love October. Usually in October we have the peak of fall color. Even though it hasn’t been as vibrant this time as in previous years, I’m still soaking it up when I see it to store up against the grey, barren landscape of winter to come. The cool crisp air is also a relief from the intense heat of summer, and though we’ve had some actual cold days, they’re not as bad as they will be later on.

Besides enjoying the in-between state of the weather, I also bask in a more relaxed pace in the family schedule. October is a nice breathing space between summer happenings,  like our “birthday season,” with several of us having birthdays in a row from July through mid-September, and the holiday preparations coming up. Besides our usual get-togethers, we had our annual pumpkin decorating (“punkin time,” as Timothy called it) and attended our first (and probably last) “Boo in the Zoo.”

Speaking of upcoming holidays, I know of people who shop all year and are pretty much done by now. I could only do that with one or two people. I knew my mom’s tastes, and would gather up things for her whenever I saw them. But we’re kind of a techy family, and who knows what new stuff will crop up before the Christmas season? 🙂 We do “wish lists” in our family, and we try to have everyone’s before Thanksgiving so as to take advantage of the sales that week, mostly online. The last couple of years we’ve had the greatest bulk of the Christmas shopping done that week, which made the rest of the season so much more enjoyable. My only real advance preparation is that I try to buy Christmas cards early on. Some years back I stopped buying Christmas cards at the local Christian bookstore when I got to the cash register, and the total was over $60. I decided that was ridiculous, returned them, and looked at W-Mart. They have an “inspirational” section, and as long as I look there before things get too picked over, I can find a good selection. I’ve been making cards for the immediate family the last few years, but that would be just too much to do for the number of cards I send out. Now, if I just got the Christmas letter ready and got them addressed and stamped soon after, I’d be in good shape. 🙂

In sad news, my mother’s oldest brother passed away a few days ago. He had Alzheimer’s and other health issues for years – in fact, during the recent flooding in TX, they couldn’t move him, and just dealt with squishy floors until it was all over. I had not had much contact with him over the years, so it wasn’t quite the emotional impact as when my aunt, my mom’s only sister, passed away a few months ago. But it’s still sad, especially now that I have only one uncle left of all my parents’ siblings.

On the creative front:

I made one birthday card for a lady that I have called my adopted spiritual mom since my college days: 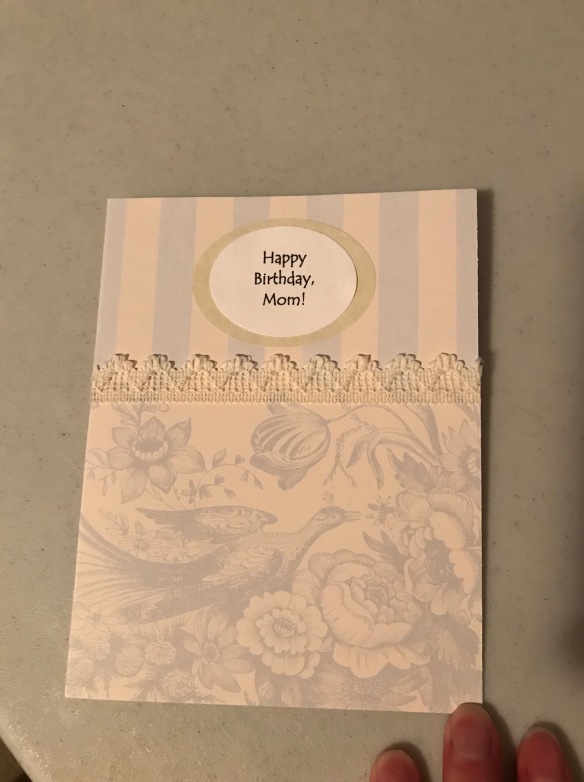 I’ve also been gathering together materials for a pillow I want to make – I actually wanted to have it done during October, but that didn’t work out. There’s still time in November, but it’s just for fun with no deadlines, so I am not stressing over it.

October was a dramatic (and welcome!) contrast from September in that regard. Whether it was getting off one medication, or just reaching the point of healing from the surgery in August, or a direct answer to prayer, I went from having 2-12 hour episodes of afib several times a month to having them just seconds at a time a few times a day. I’d like for even those to go away, too, and they may, but if this is as good as it gets, it’s so much better. Thank you for praying for me!

I mentioned earlier that my husband was asked to go to a different position in his job. He had been doing some work on this front but was asked to take it on full time. It’s interesting that two different people took on the responsibilities he used to have. 🙂 So far it has been a positive move for him. He said one advantage is that he’s usually done with work by the time he leaves the office, which was not the case before. He was even recognized by a member of upper management for something accomplished in his first week in the new job!

I also mentioned we decided for several reasons to look for a new church home. That has been interesting but frustrating. It’s amazing that churches that have the same basic core beliefs can vary so much in other areas. A couple have been really good except for one area (different areas in each case). But we’re seeking and trusting God to lead us to where He wants us to be.

For those who might be new here, Timothy is my only grandchild and three years old. As his mom says, “his brain is exploding.” He’s learning so much so quickly, it’s mind-boggling! A couple of Timothy “funnies”: he likes to go into the walk-in pantry sometimes just to look around, or, more often, to play with my “reacher” (it’s been anything from a weed-eater to a vacuum cleaner). Recently he went in and spied some animal crackers within reach and came out with them, only to come face to face with his dad. I don’t know if he had the concept in mind that it was almost dinner time and therefore not snack time, but something in his dad’s expression must have made him think he might not approve. He said in a very sweet voice, “So yummy!” Then, he’s discovered how to activate Siri on his parents’ iPhones and loves that it responds to him. Siri can’t understand everything he says, so its responses (and Timothy’s) are just hilarious sometimes. One was something like, “Would you like for me to look up edfntiotnnginahtinf on the Web?”

So, that was October! Overall a very pleasant month. I may experiment in the future with how to format this. I like how Lisa and Linda do it, especially Lisa’s video of a second a day, but some of what they include I post in other places. Monica uses a word-prompt format, which has its advantages. But I like pausing before turning the calendar page to think over the last month and mark what has gone on. It make the passing of time slow down for a moment or two.

(Sharing with What I’m Into with Leigh Kramer)