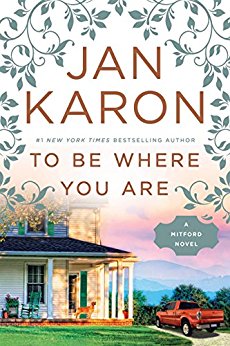 I don’t often read books “hot off the press.”  Usually I have so many stacked up from my last birthday, Christmas, etc., that anything new goes behind them. But Jan Karon’s books are an exception: they go straight to the front of the queue! To Be Where You Are is her newest, and its action starts right on the heels of Come Rain or Come Shine, in which Father Tim’s adopted son, Dooley, married his fiance, Lace.

In this book, Dooley and Lace have been fostering a four-year-old boy named Jack, and they’re making plans for a big celebration on what they call Name Day, when their adoption becomes final. That’s probably the major plot line, but as always in Mitford, there are multiple things, large and small, going on at any one time. Some of the other happenings in this book, just to name a few: one long-time Mitford resident passes away; another faces a serious illness and others offer to pitch in at his place of business; major plumbing problems wreak havoc at Dooley’s practice; Lace is offered a major art project which would take care of the plumbing bills, but it’s in California; a number of romances are blossoming; another Mitford resident is looking for ways to spice up his marriage; another is considering running for mayor; another is writing a book (not Cynthia!).

She thought that one of the hardest parts of marriage was being loving when both partners were exhausted or wounded at the same time. When you had the least strength, that’s when you had to dig beyond your limits and grab whatever could be found and give it away.

She needed complete solitude to do this huge thing. No music, no interruptions, just the work. But that was not going to happen, and she had to get used to it.

Lights on in the town at the foot of the hill. Stars on in the great bowl above.

How could he do possibly want to do this fool thing?…Maybe it wasn’t about wanting or not wanting. Though he was beyond serving the mission field, wasn’t his own town a mission field?…And didn’t charity begin at home?

Once in a blue moon they got an October morning like this. It was a day when he could almost smell the ocean, when a gull might wing overhead. He wasn’t the biggest fan of sand and sea, but occasionally some hungering gnawed at him for the visual feast of the Atlantic plain and the knowledge – more like a secret revealed only to Tim Kavanaugh – that over there were Ireland and England and Scotland and Italy and…

His sermon had been preached 24/7 on the floor of The Local for more than three and a half decades.

Reading the Mitford books is like coming home for an extended visit. It was fun seeing how things had changed and yet stayed the same. The same warmth, gentle humor, and undercurrent of truth pervades this book just as it has the others. I don’t know how long Jan will continue writing Mitford books, but I’ll keep reading as many as she wants to write!

Another nice plus to reading this volume now is that the book started in October, and I also started reading (or listening) to it in October, so there were parallels in the setting to what I was experiencing personally.

I listened to the audiobook, wonderfully read, as the other Mitford books have been, by John McDonough.

10 thoughts on “Book Review: To Be Where You Are”