Most of the time we tell children isolated Bible stories. Jonah and the big fish. Daniel in the lion’s den. The three Hebrew children in the fiery furnace. David and Goliath. Stories capture attention and imagination, and they’re probably also easier to convey to a child than, say, the outline of the book of Romans. The danger with knowing just individual stories, however, is that we miss the big picture, the way they fit into the overarching story of the Bible.

To try to rectify that, Kevin De Young wrote a book called The Biggest Story: How the Snake Crusher Brings Us Back to the Garden. “Snake Crusher” comes from Genesis 3:15, where part of God’s judgment on the serpent who tempted Adam and Eve is that some day their offspring would bruise the serpent’s head, the first foretelling of Christ’s coming. Designed for 5-11-year-olds, the book is 129 pages and ten chapters, yet most of the pages contain only one to a few sentences, and some pages are entirely illustration.

The story begins with Adam and Eve in the garden of Eden, their perfect, beautiful life, and their temptation and fall. It progresses quickly through Noah, the beginning and growth of the sons of Israel, the kings, the prophets, and the life, death, and resurrection of Jesus. Major themes of the Bible are emphasized throughout the stories: People continually sin and sin requires judgment. Though people reject God and His ways, He still loves them and seeks them. Jesus is the fulfillment of the Old Testament prophecies about a coming righteous Deliverer. He lived the perfect live we could not and gave Himself for our sins so we could finally be reconciled to God.

Re the time of Noah:

Things got so bad so fast that God decided to start over. The people on the earth were terribly wicked in their hearts, all the time, every day, nonstop.

So God took it from them.

It just didn’t seem right that the One destined to crush the Serpent would be crushed himself. So when Jesus, the Christ, the Son of the living God, died on the cross that Friday afternoon, it seemed a shocking evil beyond belief.

And it was. The worst thing that’s ever happened in the world.

But it was also the best thing that’s ever happened in the world. Just as we would expect from God. And just as God planned it.

We break promises, so God keeps his.

We run from God, he comes to us.

We suffer for sin, so the Savior suffers for us.

The book does a wonderful job accomplishing what it set out to do. The Bible’s overall story is told simply and clearly, with the individual stories taking their place within the “big” story. This is an excellent resource for children, especially for parents to share with children.

The only negative for me is the illustrations. There’s nothing wrong with them, they’re not bad at all – they’re just not to my own tastes. These images from the book are from Amazon: 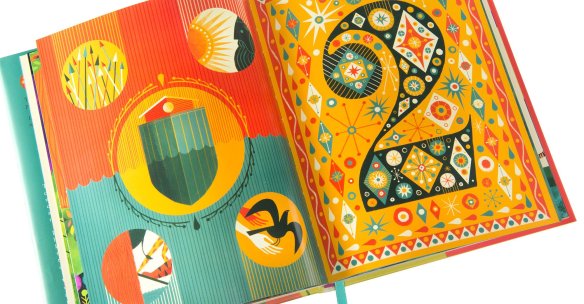 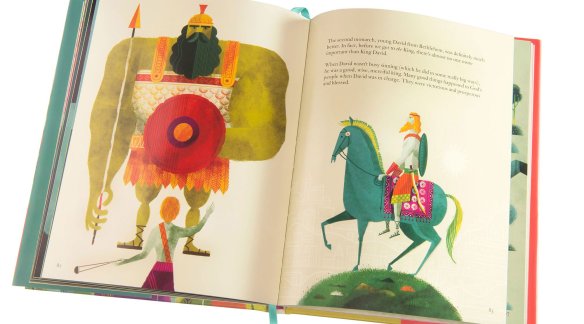 I like more realistic than stylistic illustrations. Plus a lot of it just seems too busy for me. Susan, from whom I won the book in a drawing some time ago (thank you, Susan! I’m sorry it took me so long to get to it!) described them as almost Ukrainian. Nothing wrong with that – it’s just a matter of taste. Other people seem to love it, according to the reviews, and perhaps a child might enjoy looking at some of the “busier” pages and seeing all the elements.

The book is a high quality hardback with a ribbon bookmark. The story itself is excellent. Highly recommended.

7 thoughts on “Book Review: The Biggest Story: How the Snake Crusher Brings Us Back to the Garden.”