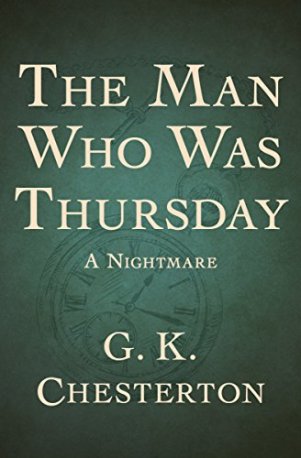 In The Man Who Was Thursday by G. K. Chesterton, Gabriel Syme and Lucian Gregory both profess to be poets, but they argue publicly about the nature of poetry and anarchy, Gregory leaning toward anarchy and Syme a “poet of law, a poet of order; nay, … a poet of respectability.” Privately Gregory confesses that he really is an anarchist, and to prove it, he wants to take Syme to a meeting of a council of anarchists. Seven men make up the council, each with a code name of a day of the week, led by Sunday. Thursday has just died and Gregory feels sure he will be elected to fill his place. He swears Syme to secrecy.

After further discussion and the codes necessary to get into the meeting, Syme asks Gregory in turn to swear not to tell a secret of his own. After Gregory agrees, Syme confesses that he is a detective with Scotland Yard.

Don’t you see we’ve checkmated each other? I can’t tell the police you are an anarchist. You can’t tell the anarchists I’m a policeman. I can only watch you, knowing what you are; you can only watch me, knowing what I am. In short, it’s a lonely, intellectual duel, my head against yours. I’m a policeman deprived of the help of the police. You, my poor fellow, are an anarchist deprived of the help of that law and organisation which is so essential to anarchy.

As Gregory makes his speech at the meeting, he fears saying anything that Syme can use against the organization, so he comes across as very tame. Syme stands up with rousing words that get the meeting behind him, and he is elected as Thursday.

Undercover, he meets with the council to determine their plans so he can thwart them. But when one of the council, an old, frail man, follows him after the meeting, Syme tries several tricks to evade him, only to find him continually following. When they finally confront each other, Syme is stunned to learn that this man is also an undercover detective. And that’s just the first step in his discovering that all is not as it appears.

This book is quite suspenseful all the way through, and the latter part becomes allegorical. I had not known that going in: before choosing this book, as I tried to read enough about it to know whether I’d be interested, but not so much as to spoil it, I had missed this aspect. I’m struggling with that same line between revealing too much yet wanting to share more in reviewing it.

It gets pretty weird at the end, and I wasn’t sure what the allegory meant. As I sought some more insight this morning, I came across part of an article by Chesterton in which he lamented, “I have sometimes had occasion to murmur meekly that those who endure the heavy labour of reading a book might possibly endure that of reading the title-page of a book.”

It is odd that one example occurred in my own case… in a book called The Man Who Was Thursday. It was a very melodramatic sort of moonshine, but it had a kind of notion in it; and the point is that it described, first a band of the last champions of order fighting against what appeared to be a world of anarchy, and then the discovery that the mysterious master both of the anarchy and the order was the same sort of elemental elf who had appeared to be rather too like a pantomime ogre. This line of logic, or lunacy, led many to infer that this equivocal being was meant for a serious description of the Deity; and my work even enjoyed a temporary respect among those who like the Deity to be so described. But this error was entirely due to the fact that they had read the book but had not read the title page. In my case, it is true, it was a question of a subtitle rather than a title. The book was called The Man Who Was Thursday: A Nightmare. It was not intended to describe the real world as it was, or as I thought it was, even when my thoughts were considerably less settled than they are now. It was intended to describe the world of wild doubt and despair which the pessimists were generally describing at that date; with just a gleam of hope in some double meaning of the doubt, which even the pessimists felt in some fitful fashion.

So realizing that it’s an allegory and being reminded that it was a nightmare helped me comes to terms with thinking I was reading a crime drama only to encounter the increasing weirdness near the end. It is a crime drama, but it’s also fantasy and philosophy.

But realizing it is an allegory also opens more questions as to what it all means. The biggest question most people have, according to my reading, is just who exactly is Sunday and what does he represent? Even the characters “see” him in different ways.

“I suppose you are right,” said the Professor reflectively. “I suppose we might find it out from him; but I confess that I should feel a bit afraid of asking Sunday who he really is.”

“Why,” asked the Secretary, “for fear of bombs?”

“No,” said the Professor, “for fear he might tell me.”

My usual go-to sources for analysis of the classics, Schmoop and SparkNotes, don’t include this book, but this article says it’s meant to be a riddle, like Job, in that everything is not explained, but we’re assured God is in control, and this article asserts that it “revolves around two of the deepest of all theological mysteries: the freedom of the will and the existence of massive, irrational evil.” The latter also suggests a plausible identity for Sunday.

This was my first time reading Chesterton beyond an occasional witty quote, and his wit shines here, as in the irony of “law and organisation which is so essential to anarchy.” A few more examples:

If you didn’t seem to be hiding, nobody hunted you out.
___
His soul swayed in a vertigo of moral indecision.
___
“It cannot be as bad as you say,” said the Professor, somewhat shaken. “There are a good number of them certainly, but they may easily be ordinary tourists.”

“Do ordinary tourists,” asked Bull, with the fieldglasses to his eyes, “wear black masks half-way down the face?”
___
“My God!” said the Colonel, “someone has shot at us.”

“It need not interrupt conversation,” said the gloomy Ratcliffe. “Pray resume your remarks, Colonel. You were talking, I think, about the plain people of a peaceable French town.”

And the more philosophical:

But right up against these dreary colours rose the black bulk of the cathedral; and upon the top of the cathedral was a random splash and great stain of snow, still clinging as to an Alpine peak. It had fallen accidentally, but just so fallen as to half drape the dome from its very topmost point, and to pick out in perfect silver the great orb and the cross. When Syme saw it he suddenly straightened himself, and made with his sword-stick an involuntary salute.

He knew that that evil figure, his shadow, was creeping quickly or slowly behind him, and he did not care.

It seemed a symbol of human faith and valour that while the skies were darkening that high place of the earth was bright. The devils might have captured heaven, but they had not yet captured the cross.
___
Shall I tell you the secret of the whole world? It is that we have only known the back of the world. We see everything from behind, and it looks brutal. That is not a tree, but the back of a tree. That is not a cloud, but the back of a cloud. Cannot you see that everything is stooping and hiding a face? If we could only get round in front—

The second article I referred to has an interesting section on our only seeing “the back side” of things, tying it in with Moses seeing the “back” of God in Exodus 33:17-23.

I’m sorely tempted to go back and reread it now with the understanding of its allegorical nature and some of these insights. But I think I’ll wait. I saw reference in some of my research to an annotated edition which might be helpful. Meanwhile, I am glad to have read it and thankful to the Back to the Classics challenge for steering me towards books I might not otherwise have picked up. I found this book quite funny in places, especially in some of the dialogue, suspenseful throughout, and ultimately seriously thought-provoking. It’s a sign of a good book when it has you pondering it long after closing it.

14 thoughts on “Book Review: The Man Who Was Thursday”