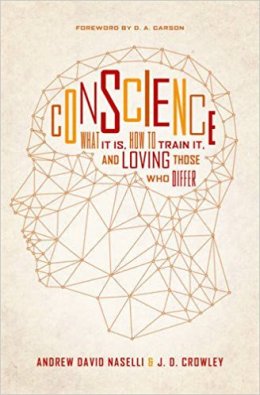 Conscience: What It Is, How To Train It, and Loving Those Who Differ by Andrew David Naselli and J. D. Crowley is a fairly short book at 149 pages (not including indexes), but it’s packed full.

They begin with a brief explanation about what got each of them thinking and then studying about the conscience. Then they explore what the conscience is and does and look briefly at every verse in the New Testament that mentions conscience. They bring out several principles, more than I can reiterate here, but a few stand out: conscience has been given to us by God; no two people have exactly the same conscience; “no one’s conscience perfectly matches God’s will”; conscience can be damaged in a number of ways; we should listen to it and not violate it so that we don’t damage it; once God shows us clearly that an issue our conscience troubles us about is not an issue in God’s Word, we yield to God as Lord over our consciences (e.g., Peter submitting to God’s rule about eating certain kinds of meat even though at first his conscience condemned them as unclean in Acts 10).

Our consciences might misregister due to being “hardened by the deceitfulness of sin.” – if we keep doing something that we feel is wrong and ignore conscience. “Feeding excuses to your conscience is like feeding sleeping pills to a watchdog” (p. 64). Our consciences are also affected by “the standards of other people such as your culture, family, or spiritual leaders. You simply go with the flow without thinking through the issues” (p. 64).

Since Christians are (or should be) continually reading God’s Word and growing spiritually, our consciences will change over the years as we realize some scruples are not Biblically based and as we become convicted of some issues that we had not previously realized were sin. We continually calibrate our consciences to align with God’s Word.

But since we’re all in different stages of growth and come from different cultures and have been taught different things about right and wrong, all our consciences are not going to be on the same page at the same time. How then do we interact with each other?

We should not sin against our conscience by thinking, “Well, Mr. A and Miss B. do this and they are strong Christians, so it must be ok.” No, “Each one should be fully convinced in his own mind” (Romans 14:2), we should do everything we do as unto the Lord (Romans 14:6), and we shouldn’t do anything that we can’t do with the full faith that it is okay (Romans 14:22-23) (“Don’t forget that ‘faith’ here refers not to saving faith in Christ [14:22a makes that clear] but to the confidence a person has in their heart or conscience to do a particular activity” [p. 97]). One whose conscience is strong in a certain area shouldn’t despise someone whose conscience bothers them on that issue, and the person whose conscience bothers them shouldn’t judge the person whose conscience has no scruples about issues which are not clearly defined in Scripture (Romans 14:3-4). Bringing up a specific matter, the authors write:

Don’t roll your eyes. This question may make you “face palm” in amazement at how strange someone else’s conscience might be. That’s typically how someone with a strong conscience reacts when they hear about the scruples of the weak. But to the weak of conscience, these are life-and-death matters. Conscience is always a life-and-death matter since sinning against it is always a sin, and getting used to sinning against conscience in one area will make it easier to sin against conscience in other areas. The strong must not look down on the weak but bear with them (Romans 15:1) and, if opportunity arises, gently help them calibrate their conscience (p. 79).

A few of the many quotes I have marked:

We should expect disagreements with fellow Christians about third-level matters [disputable matters where the Bible allows for differences], and we should learn to live with those differences. Christians don’t always need to eliminate differences, but they should always seek to glorify God by loving each other in their differences (p. 87).

Unfortunately I have seen this far too often. We spend a disproportionate amount of time on these issues, and let them distract us from the main issues.

Notice how generous Paul is to both sides. He assumes that both sides are exercising their freedoms or restrictions for the glory of God. Wouldn’t it be amazing to be in a church where everyone gave each other the benefit of the doubt on these differences, instead of putting the worst possible spin on everything? Paul says that both the weak and the strong can please the Lord even while holding different views on disputable matters. They have different positions but the same motivation: to honor God. They both do what they do for the glory of God (p. 106).

Christ gave up his life for that brother or sister; are you unwilling to give up your freedom [to do something your conscience is free about] if that would help your fellow believer avoid sinning against conscience? That’s what this passage is talking about when it refers to putting “a stumblingblock or hindrance” (Rom. 14:13) in another’s way (p. 109).

One of the authors is a missionary to Cambodia, and they discuss dealing with cross-cultural issues of conscience as well. For instance, the author had a fledgling mango tree that finally produced three pieces of fruit. A friend doing some concrete work at his house ate the fruit. In the US, we’d consider that at least thoughtless and selfish, at worst, thievery. But in that culture, eating fruit while on or passing through someone else’s property was not a problem at all (there is even Biblical precedent for that in Deut. 23:24-25 and Luke 6:1). Reacting negatively to that would be seen as stingy. Preaching against it as “sin” would have either confused the hearers or caused them to dismiss the missionary’s message. They cite another case in another country where the people had no qualms about a women’s chest being uncovered, as they associated breasts with feeding babies, but to them “the sight of a woman’s thighs stimulates lustful desires” (p. 125). So a lady missionary thought the bare-chested women were highly immodest, but they thought she was immodest for wearing clothes that showed her thighs. The authors devote a whole chapter to dealing with these kinds of issues, pointing out especially that when we discuss sin, we need to major on what the Bible clearly says is sin, not sin in our cultural contexts, and we need to be careful that we’re not reproducing churches or Christians that mirror the culture that we came from, but rather we need to help them reflect Christ in their own culture.

There is so much more that I’d like to share, but I am in danger of reproducing the book as it is. Much of this was not new to me, as once when we moved to a different area and could not find a church “just” like the one we came from, I had to study through Romans 14 and related passages to come to terms with differences in preferences among the folks in our new area.  But this is a much more thorough exploration than mine had been. I appreciated not only the study but also the practicality, balance, and accessibility (easy to understand without a lot of theological-ese) of the book. Highly recommended.

8 thoughts on “Book Review: Conscience: What It Is, How To Train It, and Loving Those Who Differ”