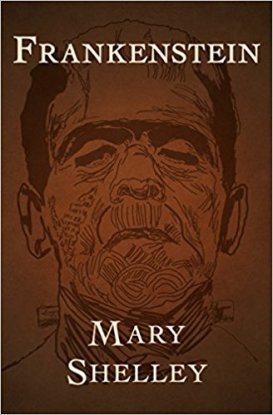 I had always associated Frankenstein by Mary Shelley with the black and white horror movies of my childhood. Since I don’t really care for horror movies, I never had an interest in reading it. But in recent years I’ve heard several people say that the book is different from the movies, that the movies provide more of a caricature than a reflection of the story. So I decided to give the book a try.

I was quite surprised! While I would never call Frankenstein nor this type of book a favorite, the story was much more compelling than I originally thought it would be. It was conceived as a result of a gathering with Mary, her lover Percy Shelley, Lord Byron, and others, when they were telling ghost stories and decided to see who could write the best scary story. Mary started this story when she was 18 and it was published anonymously when she was 20. Later editions featured her name as the author.

Frankenstein is often erroneously thought to be the monster’s name: it’s actually the name of the creator. The monster is never named.

The story actually begins with a Captain Robert Walton on a voyage writing home to his sister. He has a thirst for knowledge, a penchant for the “marvelous,” a desire to accomplish something great, and a longing for a true like-minded friend. While in an icy region Walton’s crew spies a gigantic creature driving a sledge guided by dogs across the ice. The next day they come across a man “in wretched condition” on another sledge on an ice floe. The crew brings the man onto the boat and Walton tries to help him. As they talk, the man, who introduces himself as Victor Frankenstein, recognizes in Walton the same ambition and thirst for knowledge that he’d had, so Frankenstein tells Walton his story as a warning.

Victor’s story is recorded in his own words. He had been raised by a good family  in Geneva and had an interest in the sciences. Early in his life he had come across books on alchemy (not the study of turning metals into gold, but “finding a universal solvent and an elixir of life.” according to Dictionary.com). His university studies increased his knowledge to the point that he discovered “the cause of generation and life; nay, more, I became myself capable of bestowing animation upon lifeless matter.”

With feverish excitement he decided to test this knowledge, assembling a new being from body parts of corpses he had been studying. But once the creature was made alive, Victor was repulsed and horrified.

The monster escaped and Victor fell ill. When Victor finally got better, he learned that his younger brother had been murdered, so he went home. While walking alone, Victor saw the monster and felt immediately that the monster was responsible for the murder.

In a later confrontation, the monster told Victor his own story of becoming aware, learning about himself and his world, and being met by fear and hatred from other people. He finally found an abandoned building where he could take shelter. The building was close enough to a small family that he could see their interactions, hear them, and learn from them. He grew to care for them and even did them little favors like chopping wood and setting it beside their cottage. He felt if he could introduce himself to the old, blind father and gain his sympathy, then the father could smooth the monster’s way with the rest of the family, and the creature would finally have someone to love and belong to. But that plan went awry and resulted in the monster’s being driven away.

So the monster found Victor, requested that he make a female monster, and promised that he and his mate would go away and not bother anyone. If Victor refused, the monster would take vengeance on all whom Victor loved. Victor vacillated: he was loathe to make another such creature, but if he did, he would be rid of them. But what if the female refused to go away quietly, and the two monsters wreaked havoc on the rest of the country?

I’ll leave the rest to you to discover what happened. I think my favorite section was the monster’s narrative of being nearly a blank slate and discovering his own impulses, like hunger, learning how to take care of what he needed, having a kindly attitude toward nature and mankind, feeling hurt by rejection which finally boiled over into hatred.

I was surprised to find that Victor was not a scientist as I had always thought, but a student. That explains a little bit why he didn’t have the maturity to think through his actions or to take responsibility for the monster.

Throughout the book both Victor and the monster take refuge in the beauty of nature. That’s not unusual in itself, but it is mentioned so often that I think it has to be Shelley’s contrast between the goodness of the natural and the evil of the unnatural. The fact that the final scenes take place in an icy, barren, dangerous area seems to indicate that both Victor and the monster had progressed far past the comforts of the beautiful, good, and natural.

Writing a scary story may have been Mary’s only purpose. But she may have been commentating on the dangers of pushing the boundaries of the technology of the day and the foolishness of judging by outward appearance. The original subtitle was The Modern Prometheus: in mythology, Prometheus formed humans out of clay, gave them life, and gave them fire though Zeus had forbidden it. For punishment Zeus had Prometheus chained to a rock where an eagle ate his liver: since he was immortal, every day the liver regrew and the eagle ate it again.

A new edition was published in 1831 with a new preface. Schmoop says, “Shelley wasn’t the same bright-eyed 21 year old she’d been in 1818. By 1831, she had lost her husband and two of her children, and the revised edition has a grimmer tone. In the 1831 text, nature is a destructive machine; Victor is a victim of fate, not free will…” This is the version most people are familiar with.

I had a hard time choosing between the audiobooks read by Dan Stevens (Matthew of Downton Abbey) or Derek Jacobi. I finally went with Jacobi’s narration, because I had listened to audiobooks wonderfully read by him before, and he did a superb job with this. I don’t know that I will ever read or listen to this story again, but if I do I’d like to try out Steven’s version just to hear how he handled it. The text is also available here.