It’s been a good week! I rested the first part of it, after having all the family here the week before, then caught up on laundry and such, then transitioned back into a regular week. Here are some of the highlights:

1. A day at the park. Saturday was the only day everyone had off, and among all the possibilities of what we could do, we chose a picnic lunch at a park. Granddad and Timothy got to fly kites for a bit, and the other boys tried out Jim’s drone. Then we went to the playground area –  a very nice one!

2. A playdate with Timothy. That’s what his parents call it when we babysit. 🙂 All the kids went to a restaurant. A few times Timothy mentioned missing them, but one time he said, “I like spending time with you and Granddad, too!” ♥

3. A fun Sunday. Jeremy’s flight left, unfortunately, right in the middle of church time. We weren’t inclined to drop him off way early or have only one of us take him while everyone else went to church, so all of us but Jesse went to the airport. Saying good-bye was not fun. But afterward we went to a nearby coffee shop thinking Timothy would be able to watch planes come in and out for a while. We ended up not seeing any planes at that point. But it was a pleasant day to sit outside. Plus Jeremy texted pictures of his progress in the airport for Timothy (and us) to see: displays in the airport, the coffee shop he visited, the walkway to the airplane, the inside of it, the outside when they exited on the tarmac at his layover, etc. That was fun for all of us to share. We kept track of when his plane was taxiing and did get to see it take off in the distance. Then, Mittu had noticed a Mexican food restaurant nearby, so we decided to go get lunch. The restaurant turned out to be not so good (food on the floor, torn seating, cold food, unfriendly waitress). But Timothy enjoyed the colorfulness, and we did get to see several planes coming in for a landing. I spent the rest of Sunday alternating between sleeping and reading, with a brief interruption to heat some leftovers for dinner.

4. Phone fans. Where have these been all my life?! Jason and Mittu put a couple in the pinata we had for Jeremy’s birthday. I think she said she found them at a dollar store. You just plug them in and they come on – no apps, no on and off signal. 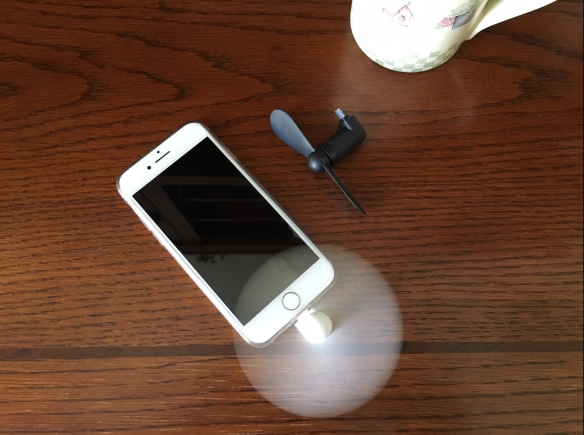 5. Brownies with a dollop on peanut butter on top. Mmmmm.