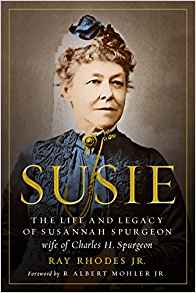 Susie: The Life and Legacy of Susannah Spurgeon, Wife of Charles H. Spurgeon is a new biography by Ray Rhodes, Jr. Susannah’s life can’t be told apart from apart from her husband’s, but Rhodes doesn’t describe her just in relation to Charles. He tells her own story fully.

Susie, as she was called because her mother and an aunt were also Susannah, “shared a lifetime” with Queen Victoria. “Susie was five when Victoria was crowned, and she died two years after Victoria’s death.” She was a city girl, living in London all her life and traveling often to Paris.

She became a Christian at about age 21, but experienced a lot of doubts for a while thereafter. She was not impressed with Pastor Spurgeon at first. He came from a rural background, and:

Charles violated her preconceived notions of what was appropriate for a polite young man in Victorian times, and a preacher at that. Susie found Charles’s hair, suit, mannerisms, and his provocative preaching style offensive. Later, reflecting on her earlier sentiments, she wrote:

Ah! How little I then thought that my eyes looked on him who was to be my life’s beloved; how little I dreamed of the honour God was preparing for me in the near future! It is a mercy that our lives are not left for us to plan, but that our Father chooses for us; else we might sometimes turn away from our best blessings and put from us the choicest and loveliest gifts of His providence.

Charles’ counsel and gift of Pilgrim’s Progress helped Susie. It wasn’t long before his pastoral concern turned romantic. The sections about their courtship are sweet, but Susie had a cold splash of reality one day. Charles was asked to preach somewhere and Susie accompanied him. They got separated in the crowd, but Charles never noticed. Lost, alone, and upset, Susie went home. Her mother “wisely reasoned that my chosen husband was no ordinary man, that his whole life was absolutely dedicated to God and His service, and that I must never, never hinder him by trying to put myself first in his heart.”

Charles and Susie married and enjoyed home life, travel, and togetherness. They had twin sons, Charles and Thomas. But both Charles and Susie developed health problems. He suffered from gout, kidney problems, and depression. It’s not known exactly what Susie’s health issues were, but severe endometriosis is suspected. She had surgery at one point but spent much of her life in pain. Sadly, she usually could not accompany Charles to places he was advised to go for his health. But he wrote to her every day, and their letters to each other are often delightful. In one of his letters from before they were married, Charles wrote:

I shall feel deeply indebted to you if you will pray very earnestly for me. I fear I am not so full of love to God as I used to be. I lament my sad decline in spiritual things. You and others have not observed it but I am now conscious of it; and a sense thereof has put bitterness in my cup of joy. Oh! what is it to be popular, to be successful, to have abundance, even to have love so sweet as yours, if I should be left of God to fall and to depart from His ways? I tremble at the giddy height on which I stand, and could wish myself unknown, for indeed, I am unworthy of all my honors and my fame. I trust I shall now commence anew and wear no longer the linsey-woolsey garment; but, I beseech you, blend your hearty prayers with mine, that two of us may be agreed, and thus will you promote the usefulness and holiness and happiness of one whom you love.

Once Susie wished aloud that one of Charles’s books could be sent to poor pastors who could not afford a much-needed library. Charles said, not in these words but to this effect, “What are you going to do about it?” That was the beginning of Susie’s book fund, which grew far beyond what she envisioned at the beginning. In one particular month, Feb. 1883, Susie received 657 letters. In 1886 she distributed 9,941 volumes. Correspondence as well as packaging, sending books, and seeking donations was a blessed ministry yet took time and energy. This ministry spawned others, like a pastor’s aid society for sending money and clothes, an auxiliary book club for lay preachers, and the Home and Foreign Sermon distribution. She said, “It is the joy of my life thus to serve the servants of my master.” She felt that the confinement necessitated by her illness enabled her to minister in these ways.

Though Susie knew some congregations were themselves poor and could not provide for their pastors, she encouraged those who could to do so in her book Ten Years of My Life in the Service of the Book Fund:

Keep your minister’s table well provided, and you shall be fed with the finest of the wheat; see that his earthly cares do not press on him painfully, and your own hearts’ burdens will be lifted by his heavenly teachings; supply him with this world’s needful comforts, and he will not fail to bring you solace and consolation in the time of your extremity. If he has sown unto you spiritual things, is it a great thing if he shall reap your carnal things?

Susie did a fair amount of her own writing, and, after Charles’s death, was instrumental in planting a church and edited The Sword and the Trowel magazine.

I’ve read Mrs. C. H. Spurgeon by Charles Ray several times, and this book draws heavily from that one. But Ray’s book was written in 1903, not long after Susie’s death. I’m sure more resources were available to Rhodes than Ray might have had, plus over 100 years of perspective adds to Rhodes’ book.

I did get just a bit frustrated at times with how the book was laid out. Though Susie’s life is covered chronologically, at each point Rhodes goes backward and forward in time to pull details about that point. So there’s a lot of back-and-forth and repetition. It helped to think of the book as a documentary. I listened to the audiobook, but I think this book would be better read than listened to.

Nonetheless, this is a great resource. I enjoyed so much hearing again the parts of Susie’s life that I knew and learning what I did not know. I appreciated the historical context, something Ray’s book could not have given as effectively since it was written in the same era. I especially enjoyed both Charles and Susie’s letters. And I was blessed by her heart and her walk with God. One phrase that stood out in many of her writings was “the glory of God.” Everything she did was ultimately for His glory.

5 thoughts on “Book Review: Susie: The Life and Legacy of Susannah Spurgeon”