January used to be a gloomy month for me. The landscape seemed all the more bleak and colorless after the Christmas lights and decorations had been taken down. The first warm spring breezes and colorful blooms seemed eons away. Coldness sank into my bones.

But more recently, I’ve enjoyed January as a time of rest after all the Christmas busyness and a transition to the new year. We don’t usually have any major events in January, so it’s a time to catch our breath, look ahead, plan, sort through things, enjoy hearty oven meals and soups, curl up with a good book, throw blanket, and coffee.

One adjustment this particular January involved my husband’s recent diagnosis of diabetes a couple of weeks before Christmas – not the best time (if there is a “best” time for that). It seemed to take 2-3 weeks on new medication for his blood sugar to settle into a mostly stable range. He’s lowering his carbs, and I need to look into lower-carb options for dinner. We’ve enjoyed frozen cauliflower rice for stir-fries and soups, but I haven’t attempted it as a side dish.

This January will always be marked by my mother-in-law’s home-going to heaven. We just got back late last night from her funeral in Idaho. More extended family came than we had thought would be able to, so it was almost like a family reunion. One niece remarked that the only think wrong was that Grandma wasn’t there to enjoy it. Family gatherings were the highlight of her life. She might be too caught up with eternal glories now to be concerned about what’s happening on earth. But I know that, if she was looking down and watching, she was rejoicing to see so many of us together. We had a wonderful time reconnecting with some we had not seen in decades, catching up with everyone, and sharing memories of Grandma. The eulogy and message at the funeral shared how Jesus made such a difference in Grandma’s life, which then rippled out into the lives of her family and friends. I want to share a post dedicated to my mother-in-law and her life one day next week.

It was a joy as well to see some of Jim’s mom’s long-time church friends and neighbors. I’ve communicated with a few of them about her progress over the last few years, since she could no longer write. One I had never met in person before until the funeral, so that was a highlight for me.

One morning before other family members arrived, we drove around the area to show our own family some of the sights. Mittu had never been to Idaho, and our boys had not been there is ages. We saw Jim’s old house, some of the places he worked and went to school, a park where we used to take the boys while visiting the grandparents, and some of the area’s claims to fame, like the Snake River Canyon and Shoshone Falls (though there wasn’t much water falling at the time we went) 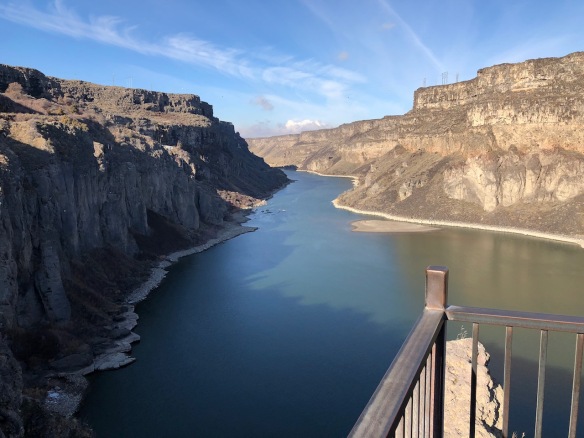 We all remarked on the difference in the landscapes here and there. Even though I mentioned January being colorless, we still have some evergreens. In SC and TN, we have a lot of trees and hills. In southern Idaho, it’s mostly flat except for mountains in the distance. Even though I prefer our hills, green in summer and multi-colored in autumn, there was something nice about so much visible sky in ID. Would’ve been a great place for my husband to have brought his telescopes at night, if we could have packed them!

This was Timothy’s first flight, and he did wonderfully with the travel, the different schedule, and meeting all the new-to-him family. 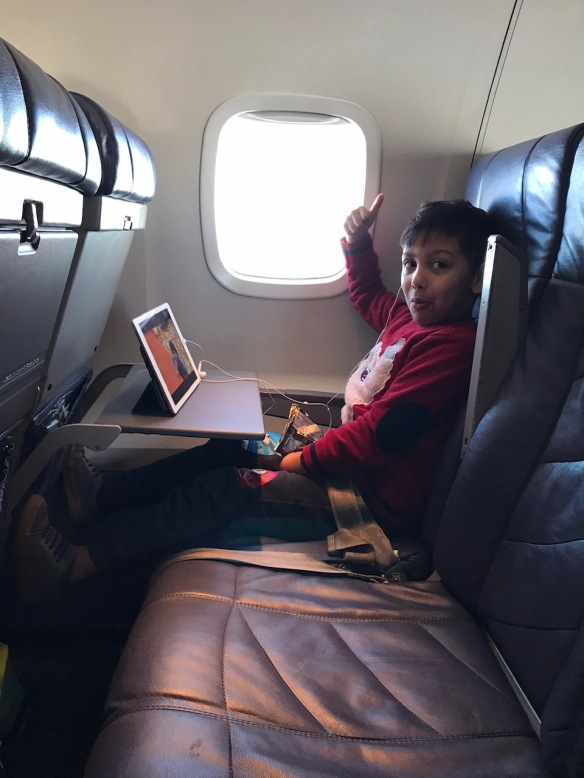 In fact, on the way home from the airport, he said he wanted to take another trip – back to Idaho. 🙂 We had to explain that all the same people wouldn’t be there.

I can’t have a monthly round-up without mentioning books. 🙂 The ones I finished and reviewed this month are:

Baby, It’s Cold Outside by Susan May Warren. Wonderful story about five people with various issues trapped in the same house by a blizzard.

Annabel Lee by Mike Nappa, fast-paced story about a girl hidden away in a bunker while both good guys and bad guys try to find her. Loved this!

Homebody: A Guide to Creating Spaces You Never Want to Leave by Joanna Gaines

I’ve finished, but haven’t had a chance to review yet:

I’m almost done with Marilla of Green Gables by Sarah McCoy, and I’m currently making my way through Katie’s Secret by Leisha Kelly, Journaling for the Soul by Deborah Haddix, and I’d Rather By Reading by Anne Bogel.

On the blog this month, besides book reviews, Friday’s Fave Fives, and Laudable Linkage:

A Sense of Him

Heaven Is Not a Lesser Answer

Looking ahead…well, today is going to involve unpacking, laundry, and hopefully a nap. 🙂 We’ll probably continue to sort through my mother-in-law’s things. When my husband goes back to work, I plan to dig back into the book I am working on. I have missed it!

And that’s our January. How was yours?

(Shannan invites us to share our end-of-month round-up posts, what we’re into, what’s keeping us sane. Her link-up for January will be up Feb. 1)