August is a full month for us with an anniversary (my son and daughter-in-law’s 10th this year) and two birthdays (my oldest son’s and mine). My oldest son came to visit for a week or so to cerebrate both our birthdays. Jim took the week off as well. Jesse is in-between finishing school and finding a job, so I’m not sure what future Augusts will look like. I hope he’ll be able to find a job locally or at least close enough to visit for those occasions. But we’ll see what happens then and just enjoy having everyone together now.

We didn’t have any major outings this time—just to a restaurant for my birthday and to an arcade/bowling/and other activities place for their Monday night specials. We enjoyed a lot of time talking and playing games.

Other than “birthday week” and getting ready for it, August was a fairly quiet month. Thankfully the trend of mishaps from last month did not continue!

Here are some of the things we’ve been into this month:

A couple of texts from my daughter-in-law about my grandson’s sayings:

This card was for Jason and Mittu’s anniversary: 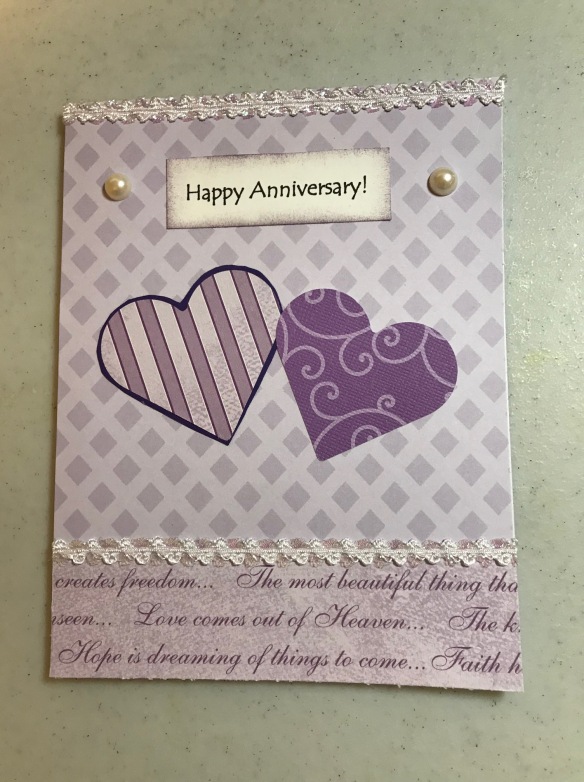 This was for Jeremy’s birthday: 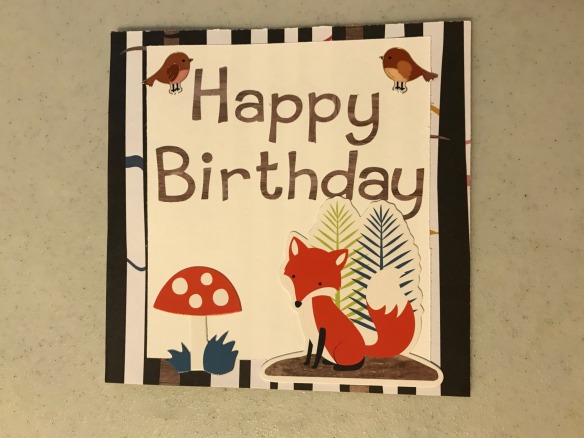 The dimensions look a little wonky because it’s partially open.

This is for a beloved former pastor who turns 90 this weekend. I’m taking a risk showing this one because it hasn’t gotten to him yet—but I don’t think he reads this blog, so hopefully it will be ok. 🙂

This is for my pastor’s wife. There’s a story behind it. When she asked how my book-in-progress was going, I told her I’d had some good sessions, and bit by bit it would get done. She told me her husband always says any big task is like eating an elephant—one bite at a time. Later she gave me a little pink elephant to encourage me to keep taking those small “bites” til the task is completed. Thus the pink elephants on the card, made with a little hole-punch. 🙂

I wasn’t quite satisfied with a couple of these—but maybe if I don’t point out the mistakes, you won’t notice them. 🙂

Jesse and I usually watch something with lunch and finished the Netflix remake of Lost In Space yesterday. It was pretty intense! But very well done. It had just a couple of bad words in it. Now we have to figure out what to start next. Any suggestions?

I also started watching When Calls the Heart, the Hallmark series based on Janette Oke’s books, while riding my exercise bike. It’s been so long since I’ve read the books, I have forgotten a lot about them. But that’s probably a good thing, or else I’d be constatntly comparing them

I mentioned on a couple of Friday’s Fave Five posts that we watched Lady and the Tramp and I Can Only Imagine together. I watched Savings Mr. Banks  and The Case for Christ while exercising before starting When Calls the Heart.

Sometimes I hate to mention shows because right after I do, they’ll have something bad on them. I’m usually wary of any kind of comedian shows on TV because they almost always contain something objectionable. One night Bring the Funny, a comedian competition show, was on, so I gave it a try. It was pretty good! And clean! I haven’t watched all the episodes, so I can’t vouch for all of them, but I hope they keep it clean.

Those of you who know me well know that’s a low number of completed books for me! I’ve been making steady progress on some others, which will probably all get done at the same time. 🙂 I’m currently reading:

Some of the blog posts from this month:

I didn’t work on my book during our “stay-cation,” but before that I had some good sessions. This is the first day in a long while I’ve had the whole day open, so I hope to get back at it. And I had a sudden flood of ideas for a couple of other books that I’m excited about and can’t wait to get to.

And that about wraps up August, though I’ll still have a Friday’s Fave Five and Laudable Linkage post before the month is officially done.

Our August has been joyful, but I know some have had a trying or sorrowful month. I pray for God’s grace for you, whatever He brings you through.