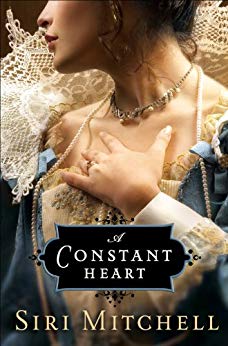 A Constant Heart by Siri Mitchell takes place towards the end of Queen Elisabeth’s reign. The Earl of Lytham, a nobleman who was one of Elisabeth’s courtiers, needed to advance himself in her favor so as so as to earn a pension, knighthood, or something to increase his own fortune. To garner money to finish and maintain his homes, he found a knight paying a good dowry to marry off his daughter. Lytham did not really care about the girl, and was, in fact dismayed that she was beautiful. His first wife had been beautiful—and traitorous and unfaithful.

The earl’s new bride, Margret, had been trained since she was five only to please her future husband. Since it was obvious she could not please the earl personally, she sought to advance his interests at court. But she was an outsider, and a beautiful outsider at that. No one must outshine the queen. Marget’s life as a courtier fell flat until Lady de Winter took her in hand and advised her to do what every other female courtier did: shave her eyebrows, paint her face white with ceruse (a white lead mixed with vinegar), and dye her hair red to look like the queen’s.

The longer Margret stayed at court, the more she discovered the futility of life there. “It was a way of life that seemed to produce nothing of worth and yet consume everything of value.” And she came to understand that few there could be trusted. But she seemed to have no choice but to continually turn herself into what she was not.

And then the most dangerous development occurred. Lytham and Margret came to actually love each other. But no courtier was to love anyone more than his queen.

I loved the depths of historical research deftly layered into this book. Siri states in a note to readers that the main characters were fictitious, but the circumstances were real. Elisabeth wore the ceruse paint to cover up both signs of aging and the smallpox she had endured. People didn’t realize the negative effects of lead paint until later. I had hoped Siri would also talk about some of the other details of the story in her note, but she didn’t. I did some reading about being a courtier in Elisabeth’s time, and many of the details Siri brought out were mentioned. Siri didn’t go into any of Elisabeth’s many accomplishments: perhaps all or most of those occurred before this last decade of her reign.

Some would want to know that sex is referred to often in the book. Since one method some used to curry favor involved sexual advances, that kind of thing could not help but be mentioned. But nothing is explicit.

I enjoyed Margret’s and Lytham’s journey toward learning to truly love each other and wrestling with just who the sovereign was in their lives. Grace was contrasted with the consuming machinations to court the favor of a capricious monarch. The integrity of a faithful heart was shown to have great value in all eras.