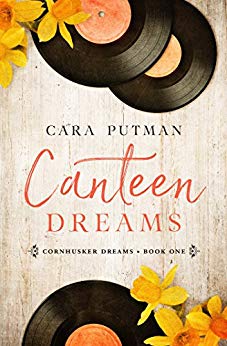 Canteen Dreams is a novel based on author Cara Putman’s own grandparents. It was her first book, released eleven years ago. But Cara wanted to fine-tune and re-release it. This edition came out on 2017.

The story opens December 6, 1941. Audrey Stone attends a dance in her home town of North Platte, Nebraska, and is asked to dance by local rancher’s son, Willard Johnson. Willard is interested and wants to get to know Audrey better.

Then Sunday morning, the Japanese attack Pearl Harbor, and everything changes.

Willard’s brother, Andrew, was in the Navy. While the family waits to hear about Andrew, Willard would like nothing better than to enlist immediately.

Since North Platte is a railroad hub, and lots of troops come through on their way to service, someone gets the idea to offer the boys food and coffee during their brief stop. The young men are so encouraged and appreciative of the effort that the train stop refreshments grow into a canteen, with a nearby building, music, sandwiches, and a friendly atmosphere.

Audrey throws herself into working the canteen, on top of her full-time job as a teacher. She has little time for anyone or anything else, which doesn’t help her budding relationship with Willard.

Willard’s dissatisfaction with not being able to enlist grows into resentment and jealousy of the young soldiers at the canteen, which further impacts things with Audrey.

Both Willard and Audrey are believers and struggle with seeking God’s will for their lives. I liked their pastor’s counsel, especially these bits:

Let the sure hope we have in Christ build a bedrock of faith in your life. It’s the only way to survive a storm like the one your family has entered.

He is the vine, and we are the branches. We cannot expect to have the strength to lay down our lives, our rights, for others until we are firmly growing in a deep relationship with Christ. A superficial relationship is not sufficient. Without more, we will fail every time in our attempts to die, because we attempt to do it without the strength and love God gives.

This was a sweet story in itself, but knowing it was based on a real couple made it even more enjoyable.