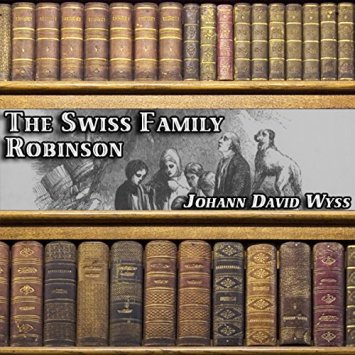 Finding a good translation of Swiss Family Robinson is not as easy as one would think.

The book was written by a Swiss pastor, Johann David Wyss, and originally published in 1812. Wyss wrote the story for his sons to teach about spiritual and family values, industriousness, and wise uses of plants and animals. One of his sons edited the book and one of them illustrated it (both named Johann, like their father, but with different middle names).

After that, the book passed through multiple hands which translated and added to or deleted from the story. I listened to an audiobook version and scanned a Kindle version which were alike at the beginning but had different characters and scenes in the second half.

The story, as I am sure you know, involves a family of two parents and four sons shipwrecked on an island somewhere in the East Indies. The family name is not Robinson: their last name is never mentioned. The book is styled somewhat after Robinson Crusoe: he is even referred to often in the book.

Their first order of business is to get as much as they can off the ship before it sinks and to find suitable shelter. They are able to gather some food from the ship, but then need to search the island to see what they can find.

Fortunately, the father has a wealth of knowledge of botany. He knows the scientific names of plants as well as their uses.  One book I read recently said ministers of a certain era were expected to know a lot about botany. That may be the case here, or it may have just been an interest of Wyss’, or he may have crammed as much as possible into the story as a teaching tool.

They also get acquainted with the fauna as well as the flora. They use some animals as food and tame others to help them in their work.

The first half of the book details how they discovered the resources of the island and made a place for themselves. The only real danger they run into is a pack of jackals.

At the end of this section (what I think is the end of the original book), the family is content on their island and want to remain there. They’ve constructed various building projects and have plans for a sawmill and other industries. The father’s only concern is that his children will be alone when he and his wife pass on.

In the version I listened to, the father then espies a vessel at sea after about four years on the island. He meets a couple of men from the ship and gives them the journal he has kept. The men were exploring the island to see if it was suitable for the ship to land. They plan to put their people on boats and bring them in the next day. But a storm drives them out to sea again, and the family fears they ship is lost.

There’s a lot more drama in the second half: a couple of serious injuries, a massive storm, encounters with “savages” from another island. They discover a European missionary and a widow with two daughters on this island. The ship they had encountered was not lost at sea, but eventually made it home, along with the father’s journal. Another ship comes back to find them, and then decisions are made as to their future.

In the Kindle version, which happened to be the Kingston translation and is apparently more well known, the time jump in the second half is closer to ten years. The family discovers a girl who has been shipwrecked, Jenny Montrose. Eventually a ship comes looking for her, and decisions have to made about everyone’s future.

The first part is interesting, but a little dry, since the only action is discovering certain plants and animals, building a couple of different homes, handling whatever problems come up. The second half drew me in more since there was more action.

The four boys’ personalities are well-drawn and distinct.

Christian values form a major part of the story. The father corrects the children in various ways (especially in manifestations of pride). The family prays together, keeps Sunday set apart, applies Christian principles to life. One example, when they first discover the sailors on the ship have left them behind:

See how those on whose skill and good faith we depended have left us cruelly to our fate in the hour of danger. God will never do so. He has not forsaken us, and we will trust Him still. Only let us bestir ourselves, and each cheerily do his best. Who has anything to propose?

Near the end, the father in the story writes:

And my great wish is that young people who read this record of our lives and adventures, should learn from it how admirably suited is the peaceful, industrious and pious life of a cheerful and united family, to the formation of strong, pure and manly character.

You’re probably familiar with the 1960 Disney film version (which added pirates to the mix). We saw it ages ago, but I’d like to see it again some time now that I’ve read the book. There have been various other film versions as well. When my children were young, we saw a cartoon series version from the viewpoint of a daughter.

Besides Wikipedia, a couple of interesting articles about the book are:

Have you ever read Swiss Family Robinson? What did you think?