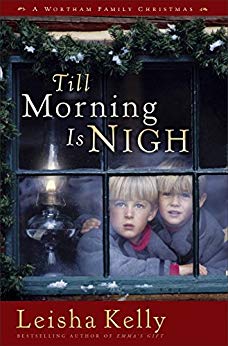 Till Morning Is Nigh: A Wortham Family Christmas by Leisha Kelly comes about in the middle of her six-book series about the Wortham family. I finished the series back in September but wanted to save the Christmas story until now.

The Wortham family had been down and out during the Depression. With their last hope of a job fallen through, they hit rock bottom. They took shelter in an abandoned house, then got the idea that perhaps the owners would let them stay there in exchange for fixing up the place. The owner was an elderly woman named Emma who took a chance on the family. She had not been able to live home alone, but the Worthams eventually moved her back into her home with them, and she became a grandmother and mentor to the family. That was back in Book 1, Julia’s Hope.

This story opens several years later. Emma has passed away as has the Wortham’s neighbor, Mrs. Hammond, a mother of ten children. George Hammond had been devastated and unstable after his wife’s death, and the Hammond children often spent as much time at the Wortham’s house as their own.

George had seemed to settle down for a while. But now it’s the first anniversary of his wife’s death, and he’s missing. The older children think perhaps he has drowned his sorrows in a drinking binge, but they fear worse. Some of the middle children are angry. The younger children are just sad and afraid. The Worthams take them all in and try to help. On top of everything else, some of them have the flu.

While nursing the various sick ones, keeping everyone fed, praying and worrying, Samuel and Julia Wortham try to prepare a meager Christmas and discuss what they should do if the worst has happened to George.

When a friend tells Julia, “I don’t know how you do it,” Julia responds, “I don’t. Whatever you think I’m accomplishing, I really can’t manage at all. Nothing but the good Lord could have gotten me through this holiday.”

Someone suggests that they make a Nativity scene out of what materials they have. The project starts out as a diversion but eventually becomes meaningful in various ways to different ones.

This story is a reminder that not all Christmases are giddy parties. Sometimes deep grief and stark need prevent the usual Christmas we’ve come to expect. But joy, love, and light can shine in and touch hearts.

I think this book could be read easily as a stand-alone. Enough of the back story is explained that readers new to the series wouldn’t feel lost. But the story is richer for having read the rest of the Worthams’ books. I enjoyed them all, so I recommend them all to you.

(Sharing with Grace and Truth, Carole’s Books You Loved, Booknificent)

8 thoughts on “Book Review: Till Morning Is Nigh”